Back in the day the only way fans could connect with their favourite comic book artist or writer was to go to a comic con or store signing. And, if that specific artist or writer wasn’t coming to your area you would have to travel or pray to meet them in person.

With the popularity of social media, it is so easy nowadays to connect with the comic community. With sites like Twitter, Facebook or Instagram, you get a small glimpse into artists’ lives, see what they are promoting, what cons they will be attending, what they are working on and sometimes what they do as hobbies or what they do in their down time. This also allows artists/writers to be more accessible and not just by aficionados or convention goers. Fans can ask them questions and put a face to the name of the artist/writer. You can even have a conversation with them (well, that is if you are funny or clever enough to get their attention). Fans have access to their favourite comic celebrities 24/7. Isn’t it an amazing decade to be a fan? 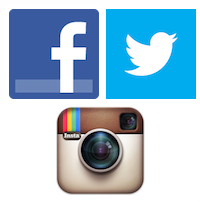 This also works vice versa: artists and writers can connect with their audience better. They stay relevant and at the forefront of the  consumer’s mind. They can also promote appearances and signings and even get feedback from their fans.

As social media continues to expand so do the people who post. Twitter has a countless number of comic book artists as well as publishing companies at your fingertips, Instagram is a great place for artist to show what they are working, sometimes you even get sneak peeks on pages of your favourite comics. And now there is an even more interesting way to connect with the comic community and that’s through Vine.

Vine is a mobile app that allows users to post 6 second videos that can be embedded or linked to Twitter, and the comic book world is really starting to pick it up. I have had Vine for a while now (I don’t post very often), but only in the last couple of months has it expanded and branched out into comics. Some of Vine’s comic contributors include MarLo Meekins, Kalman Andrasofszky, Cary Nord, Warren Ellis, Francis Manapul, Ryan Penagos, Michael Walsh, Takeshi Miyazawa, Shawn Crystal, Mark Brooks, Kate Leth, Kevin Mellon, B Clay Moore, Jamie Mckelvie, Eric Canete, Ivan Brandon and Ed Brubaker….there are probably more, but I think that is a pretty good list if you ask me.

Marlo Meekins, I must say, has some of the best Vine posts. She uses her 6 seconds to produce some goofy and interesting videos. She recently used it to create stop motion animations starring her dog. She quickly became popular on Vine and if you decide to join I would suggest following her.

If you have been one to shy away from social media, but are a comic book fan, you may want to think twice about dismissing the medium. Create an account and take a peek at what the comic community is doing and how they are connecting, all from the comfort of your computer or smart phone.