Tuesday night I usually don’t stay out too late, I sit and watch TV, but last week I peeled my butt off the couch and walked over to the Cameron House (408 Queen Street West) to meet with Dalton Sharp, the over seer of the Toronto Comic Jam. He agreed to sit down with me to answer a few questions I had about the Jam.

I arrived at the Cameron House completely unaware of what I was getting into. Their website doesn’t give much information besides the time, date and location. I walked into the Queen Street car and timidly asked the bar tender where I could find the Jam. He pointed to heavy black velvet curtains at the back of the bar and said “straight through”.

When entering the Cameron House back room I saw a two level audience space with tables and chairs and a stage at the front. Instead of a band on the stage there were clip boards filled with comic panels, and instead of an audience there sat about 15 artists with their heads down concentrating hard and scribbling away. 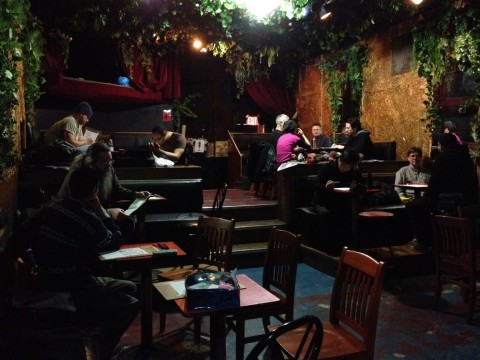 I found this intimidating. No one looked up to greet me and everyone went about their business of drawing. After a couple of minutes of snapping pictures and checking out the art, a friendly arm leaned over with a clipboard; “want to sign in” he said.  After signing, I started chatting to a Toronto Comic Jam regular. He was nice enough to point out who everyone was and who I would be interviewing, Dalton Sharp.

Tip: Based on my first experience at the Toronto Comic Jam, I would suggest bringing along a friend to make the situation more comfortable. If you have done Jams like this before, you can brave it solo. The attendees are very nice, just very focused.

Once I introduced myself to Dalton, and he grabbed a beer. We sat down to discuss the Jam:

L: Can you tell me what is the Jam all about?

D: One person draws one panel, the next person draws the next panel. It’s the same as a Jazz musician’s jam, where we try to match the rhythm and tempo of what has come before and by the end you get something the flows together. 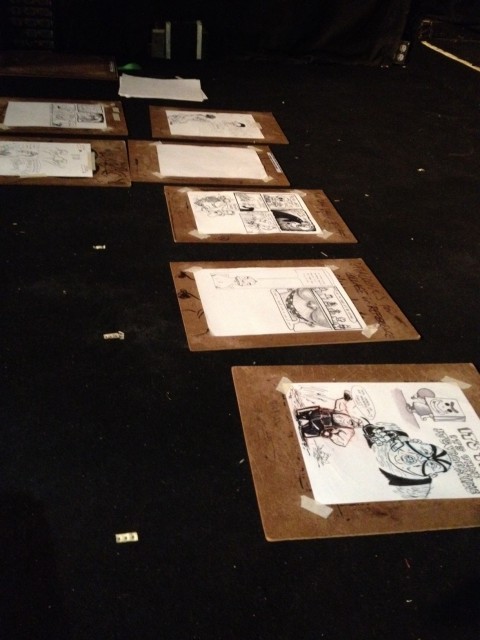 L: This is for both the art and writing of the panel?

D: Yes, or at least riff on it, if there is a bunch of different art styles that are not connected then it’s just a collage. It’s not a comic.

L: How did the idea for Toronto Comic Jam come about?

D: It started in Montreal about 15 years ago, it was Rupert Bottenberg (who has created strips for anthologies in the US, Canada and Europe) who start it, then Dave Howard found out about it and brought it here (to Toronto). It floated around for a little bit then found its home at the Cameron.

L: You have a good relationship with the Cameron House?

D: Yeah, it’s been many many years and Paul the previous owner, we were a favourite of his. He told me it was one of his favourite nights of the year, and we have continued on with the new management and it’s great.

L: So how long has the jam been going on in Toronto?

D: 14 – 15 years, it started up soon after the Montreal Jam. There are also many other Jams in Toronto, there is a group that meets up in the Annex, who are also called the Toronto Comic Jam. They are newer. There is a Drink and Draw at the Black Bull, and the Toronto Draw Club, which is mysterious. (After trying to find it and look it up, I know why he said this)

L: People who can draw always amaze me, I have no artistic talent.

D: A lot of people can’t draw, they just come in and roll with it. After there first time some people never come back, and some people stick with it.

D: Number of people, 15 to 25, in that range. There is usually a better gender mix, tonight is really heavy on the guys  (I look around and notice only myself and one other girl in the room, Dalton then reassures me) women are usually about a 3rd of the average group. Although, tonight isn’t really backing me up. (He says with a chuckle).

L: How did you get involved in the Jam?

D: It’s kind of like the flying Dutchman, Dave Howard (the originator) has a wife and daughter, I don’t. He was also getting more responsibilities, so he was getting tired of running it. He tried for a few years, looking around and asking for people. And finally, I got  tired of him asking crazy people, I was just rolling my eyes and said “OK I’ll do it” and I can’t even remember how long ago that was, about 6 or 7 years ago.

L: How did you start coming to the Jam?

D: I just heard rumours that there was such a thing as the Jam. I heard it was at the Cameron, so I just sort of showed up, and got lucky and liked it, so I started coming off and on. I had a friend who flew in from Vancouver a long time ago, who I would go with, and we would sit and drink and draw. It was more drink heavy at the time.

L: Have/do you ever have people in the industry come to the Comic Jam, or is it just people who enjoy it as a hobby?

D: It’s both, everyone from Chester Brown  and Dave Sim, Keen Sue, Jason Turner.  The list of people who are professional, goes on. But there is a lot of people that do it because they enjoy it. It’s just a fun thing to go to.

We then get interrupted by members of the Jam asking for “the books”.

I then find out, that “the books” are a collection of the comics from the Jam that Dalton puts together himself. It comes out every month. He informs me that “it has (an) ISBN number, so it is official.”

L: Do you have any future plans for the Jam?

D: I think it is going to roll on steady as it is, we have been going for so long now. I don’t think we are going to quit any time soon. I don’t have any grand plans. I have thought that it could function as some sort of illustration collective. That would be really interesting, what we could do for magazines, because there are so many different talents people that can draw. But, I am pretty unambitious when it comes to these things.

L: So, Dalton, now the hard question. What is your favourite comic book?

D: (After pondering for a while) There is a book called Fun Home by Alison Bechdel, it is about her life growing up. She originally talks about her roots and growing up with her father. The new book, that is out, is about her relationship with her mother. So, I am looking forward to reading that. I have also recently read, Chester Brown’s Paying For It, but I read it as an E book. I would really not do that again. He has a very fine delicate line and it was just not coming through properly. It takes him about five years to finish a book, so that experience kind of ruined it for me.

After skimming through my chicken scratch written questions to see if I forgot everything. I tell Dalton that he helped answer all my questions, and that my main goal is to just inform people of the Jam in general. I feel as though it is a bit on a secret society. You need to know someone who is in to even know that things like this exist.

Hopefully by posting this article it will help inform others of these types of events in their areas. So, if you are looking to have some fun and draw with other liked minded people be sure to check out Toronto Comic Jam at the Cameron House. 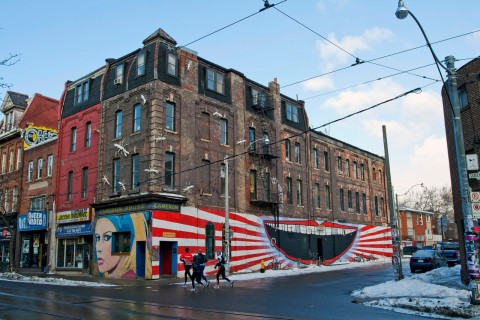