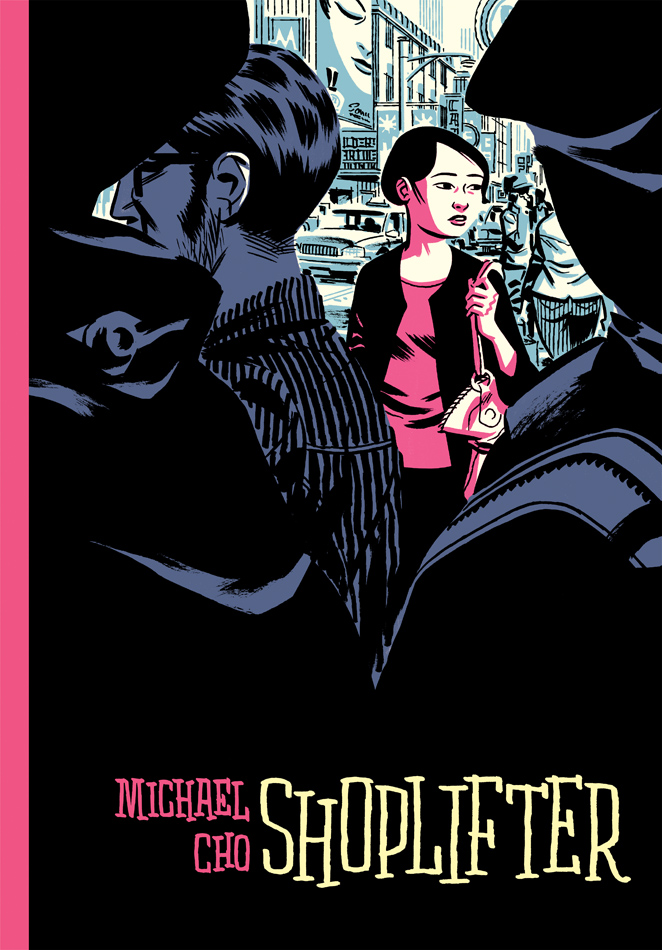 Michael Cho is a Canadian cartoonist who has previously published a collection of sketches about Toronto titled Back Alleys and Urban Landscapes. So it seems fitting that he begins Shoplifter by showing the reader a cityscape. There are black, rectangular bars above and below the image, giving the effect of a wide-screen movie. The buildings are varied: some are run down and industrial, some are hotels to cater to tourists and businessmen, and some are newer office buildings. These are silver spires so tall that they don’t fit within the frame, as their actual height is masked from the reader.

We see the city as someone looking out the window of a passing train would see it, and I found it hard not to think back of my own GO Train commute of yesteryear into Toronto from Hamilton. The reader is introduced to the city where the story takes place, but Cho uses the city as more than a simple setting; it influences mood, adds to characterization, and frames the story.

Shoplifter is the story of Corrina Park, a twenty-something who dreams of being a writer, but instead works at an advertising agency writing copy. Her story is not an uncommon one among young professionals: she is well educated, unhappy with her personal life, and unfulfilled in a job that was taken out of necessity to pay the bills.

After introducing us to Corrina, her place of work, and her coworkers, Cho gives the reader a two-page spread of the bustling city. It is crowded and wondrous, and Corrina seems small as she slinks into the subway.

During her subway ride Corrina begins to remember how excited she was when she first moved to the big city. She thinks about the buildings got bigger and bigger as her bus approached and she ponders on all the fun new friends she expected to meet. This is juxtaposed by a full-page shot of the subway train traveling outside on an elevated track. Corrina is physically and emotionally moving away from the city and its promises. Implicitly, this page also re-enforces her status. Corrina is unable to afford an apartment right downtown, and must travel via public transit to a neighbourhood in the city within her price range. 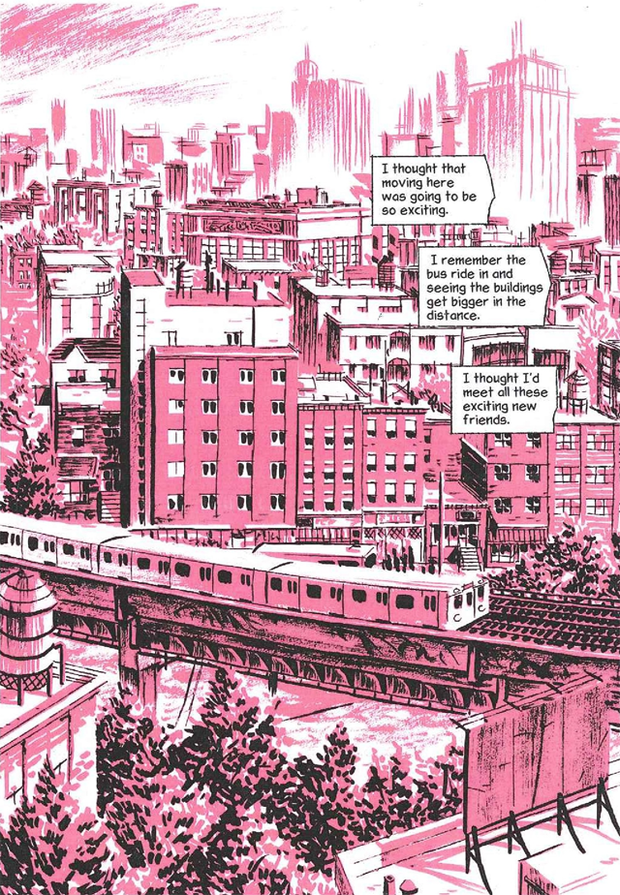 This trip home introduces the 24 Seven convenience store, and Corrina’s penchant for shoplifting as a coping mechanism for dealing with her unhappy life. The 24 Seven is a lone, single story building. This both re-emphases her distance from the downtown core while at the same time illustrating the importance of the 24 Seven to the story.

Cho uses a single or double page spread like these in a variety of ways. After a rough day at work a dark basketball court comments on the quiet loneliness of the urban jungle; after a fun evening out with colleagues the lights of cars and buildings help show the excitement of meeting a new love interest, and the outside of a stationary store become a symbol for hope and new beginnings.

The story is one of finding your place in the world, and Corrina’s tale is one instantly relatable to all of us, for we have all been her (or will be her) at some point in our lives.

Anyone who has read Cho’s Back Alleys and Urban Landscapes knows that he can craft amazing images of buildings, but Shoplifter is an excellent example of how a cartoonist can use buildings as a storytelling tool.

Cho’s first graphic novel is a beautiful, wonderful story of hope and achieves that most difficult of tasks: making us reflect on our own lives. And isn’t that what all great stories do?