It might seem like I have been playing a lot of video games lately, but mostly that is due to the release schedule of the video game industry. The majority of big titles hit the shelves during the fourth quarter to maximize profitability via the Christmas shopping season. After I had saved Gotham City in Batman: Arkham Origins I barely had time recharge my controller before diving into Lego Marvel Superheroes. A tough job, I know, but somebody has to do it.

Lego Marvel Superheroes is the latest in the immensely popular and addictively fun series from TT Games and Warner Bros Interactive Entertainment. The game follows a similar pattern of its predecessors, having heroes smash some Lego structures and build new ones why trying to disrupt the nefarious plots of villainous mini-figs. The plot of Lego Marvel Superheroes revolves around S.H.I.E.L.D. bringing together teams of heroes to prevent Dr. Doom and a team of villains from stealing pieces of the Silver Surfer’s board (and power cosmic). This allows for numerous team combinations that we don’t see that often in comic books (such as Thor, Wolverine, Captain America, and the Human Torch storming Asgard) and works really well in showcasing a myriad of characters, each with unique powers.

The game is full of extras and there is plenty to do after you finish the main story. Tonnes of unlockable characters, side-quests, brick hunting, and trophy completion will keep a completionist gamer busy for hours.

It struck me that this game fulfills the same niche that Marvel trading cards did in the early nineties. That is, kids will learn about who is who in the entire universe in a way that is more economical and less time consuming that reading 100 comic books each month. Kids need to learn about Black Bolt and M.O.D.O.K sometime. 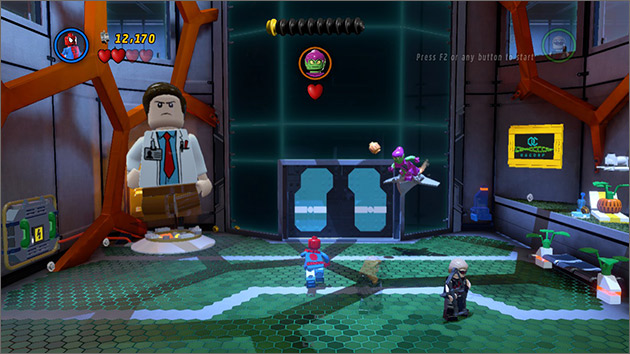 The play control and game mechanics are similar to previous games, but cooperation between characters is far more central to the completion of a level. At times I also found the game quite buggy, with characters or enemies getting stuck in walls or under bricks. I actually needed to deliberately jump down a pit more than once to have my death “re-set” the other members on my team. These bugs aren’t insurmountable, but they do detract from the overall experience. I suspect that they will be fixed with online patches, but I loathe that such a process is necessary. Just play-test and fix the game before it is released.

But I digress. The puzzles within the game will be challenging enough for children but not so frustrating that they give up. I did find that sometimes the game’s onscreen tips were actually a hindrance though.  For example in one level I found myself before two red Lego hoops. When you walk up to them the onscreen tip says that only web-slinging characters can pull these down. I only had Captain America and Mr. Fantastic with me so I naturally assumed that I would need to come back later with Spider-Man. I was wrong. The game wanted me to use Mr. Fantastic to pull down these hoops. Because Mr. Fantastic is known far and wide as a web-slinging character? Incidentally, Hawkeye can also pull down these hoops.

But little annoyances aside this game is a must have under the tree of any video game and comic book fan. Even if you aren’t a gamer and just have a Playstation 3 to watch Blurays I would recommend picking it up. It is thoroughly enjoyable, with a light level of comic violence, and is pure fun.