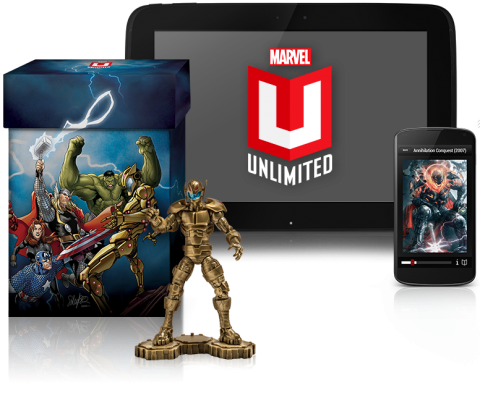 As long time readers know, I am a huge supporter of Marvel’s Unlimited Comics. The web-based service is essentially a Netflix of Marvel Comics, and for an annual fee of $70 you can read over 10,000 issues. I do not subscribe so I can replace the purchasing of paper comic books, but rather I do so to read even more comics in an enjoyable and economical fashion.

Recently, at the South by Southwest (SXSW) festival Marvel announced some additional features that will be coming to its Unlimited service, most notably the use of sound effects and additional DVD-like commentary as you read. This expands on their Augmented Reality (AR) app that can be used to access additional features while reading a paper copy.

In short, at certain panels you can access extras such as commentary by the creative team, funny bits from Marvel staff, or original pencils of the panel you are viewing. But these are strictly extras, by adding sound effects, music, or motion to a comic book you are in essence changing the medium itself.

The book can, of course, be read without all the extra bells and whistles. I tend to read my comics once in the traditional manner and then I’ll go back and check out all the extras, much like you might do with an extended edition Blu-ray.  But that is easier because writer commentary or pics of the original pencils are extras that give insight into how the books was put together, it is not (necessarily) part of the story.

Sound and music are another matter entirely. When we read a comic book and we supply the sounds ourselves, using the visual cues on the page or the descriptive lettering. But if the sound is supplied for us we no longer use are own interpretation; it have been given to us. This isn’t necessarily a bad thing, but it will cause a slight shift for an art form which is a visual medium to one that incorporates sight and sound to tell a story.

The comic book will still remain primarily a visual medium, but something new is created when the artist combines a specific sound effect or musical note with a chosen set of images and words. How we feel and interpret the panel can change based on sound, and I see a lot of interesting possibilities for the use of sound as the medium and technology advance. Perhaps even a new member of the creative team: comic books would now have Foley artists. In addition, it would raise the question of whether or not we need to include the onomatopoeic lettering in a panel. Ostensibly the artist would now have more space to work with because sound effects wouldn’t need visual cues.

I don’t think that this will be game-changing, but I do applaud the way that Marvel is playing with the medium and how we interact with stories. It could add another interesting layer to an already complex medium and allow artists to experiment even further.

Finally, if you are interested in Marvel Digital and want to be kept up to date on new announcements, I would suggest you follow Ryan Penagos, Executive Editorial Director, Marvel Digital Media, on Twitter at @AgentM.