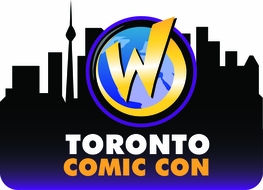 Comic book conventions are funny animals: you first approach them full of wonder, but after 50 or 60 shows you don’t get quite as excited. The problem is that you have seen it all, for, as Walt reminded me, “comic cons aren’t for old farts like us”. He is mostly right. When you have been collecting comic books for 20+ years there isn’t much left that you are looking for. Sure, you might still be trying to find an affordable copy of Amazing Fantasy #15 but really you have everything you want.

So when a show comes around you buy a ticket and head on in, only to be disappointed that there isn’t much to see and even less to buy. The problem though friend isn’t the show. It’s you. Even San Diego wouldn’t quite satisfy your appetite because you don’t need any more books or toys or Bazinga t-shirts; in short, you have forgotten why a comic book convention was fun in the first place. So I was happy to be reminded by Wizard World why comic book convention are fun.

Wizard World Toronto is a smaller show than Fan Expo or C2E2 or San Diego. We will not hear any big announcements or meet any Hollywood celebs with a movie coming out this summer, nor will we meet the royalty of the comic book industry. But none of that matters. Wizard World Toronto is fun because it is a smaller show, yet they are able to leverage all the Wizard World shows to get some good guests. If you are a veteran of 100 shows you might forget that meeting Chewbacca lights up the eyes of a young Star Wars fan, or that Billy Dee Williams is genuinely charming and funny, or that we have great homegrown Canadian talent.  But those are exactly the kinds of things that you remember at Wizard World.

Friday night was quieter and slower than Saturday or Sunday, which made it the perfect day to talk to your favourite artists and celebrities for great lengths of time. Scott has already told you all about how he enjoyed meeting Jesus Merino and I got a chance to talk with Ken Lashley about his work for Lucasfilm ( you really should meet him at a convention: Ken is a great guy and super-funny, ask him to tell you about the Star Wars bedsheets he designed). At a bigger con we would not have been able to have as much face time with these creators.

The rest of the CBD crew has told you about the celebrities they met and interviewed and their stories match time and time again: these celebrities love doing the conventions and talking with fans. They had a great time and therefore fans have a great time. I got a chance to meet WWE Legend Ted Dibiase and chat with my favourite heel wrestler from my childhood. Ted (and Virgil) took a lot of time with fans and I was surprised to learn that the fearsome Million Dollar Man is called Teddy with affection and respect by his fellow colleagues.

The store owners who set up shop were pleased at the sales. I got a chance to chat with Conspiracy Comics, Paradise Comics, and Haganland and they were all very happy with the turn out. The customers that I spoke with were happy with what the dealers brought as well and I managed to score a couple of old Famous Monsters of Filmland magazines (so even an old fart such as myself can still find something he needs). I would caution any dealers who dismiss this show to take a second look; it would be worth it.

We had a great time at the CBD booth talking with the fans. As our readers know we love to talk comic books and it was a great experience to chat with you about the industry today.

The venue is still ironing out some kinks. While appropriate for the size of convention it is still is far enough away from downtown that it will lose some attendance. On the plus side the parking is much easier at the Direct Energy Centre than it is at the Metro Toronto Convention Centre. Wizard World needs better passes than wristbands though, if I have a weekend pass I would rather not need to keep a plastic garbage tie on my wrist for 3 days.  Also the location basically makes it a wasteland for food, so if you don’t want a $7 pizza you are trekking up a few blocks or driving to find some other options. Minor quibbles aside Wizard World Toronto did a great job building itself as another show in the Toronto landscape. It hasn’t quite reached its potential yet, but it is well on its way.

There was something for everyone at this show, games, costumes, anime, comics, steampunk stuff, original art, and toys. The difference was there was not a crush of crowds to take the fun away from you. It was fun. We had fun, you had fun, and the organizers and celebrities had fun. And that really is the point of a comic convention isn’t it? Nuff said.