Due to naughty talk, some naughty language, and generally adult themes, reader discretion is advised.

There are a couple of things that I have to clear up with regards to this interview before I go on to post it. First off, be forewarned: thar be spoilers ahead, matey! Also, please keep in mind that this is a VERY tongue-and-cheek interview (I’m interviewing Danny Husk for cryin’ out loud!). As I was transcribing the interview this morning I realized that since Danny Husk’s humour is pretty dry, it doesn’t necessarily translate well into this transcript (I couldn’t also figure out a way to transcribe the copious amounts of laughter on my part).

I have three regrets with regard to this interview. The first is that it wasn’t videotaped; Danny Husk is a very visual character and a lot of the humour comes from his facial expressions and mannerisms. The transcription could not even come close to reproducing the intonation and facial expressions that are so much a part of Danny Husk. The second regret is that I left my cards in my bag back at the CBD table, so I couldn’t leave one *for* Scott Thompson. The final one is that I couldn’t find a way to transcribe my laughter because, and I’ve got a couple of these under my belt, and it was the funniest interview that I think I’ve ever done. 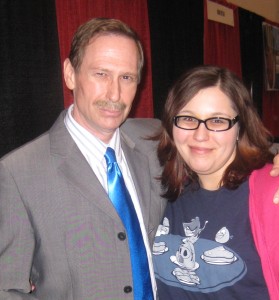 Danny Husk (DH): So, what was your name again?

DH: So, Shelley, how do I know that you’re actually legit? You could just be anybody with a…

SS: I have a press thingy

DH: Ooohhh. I’m just joking. But I think, yesterday I did give an interview with a young lady who said she had a blog but when she gave me her card, it was just a piece of scrap paper that she’d written her name on but I still gave her the interview.

SS: Oh, that was very nice of you.

DH: Because you never know. The craziest person on Earth might be the one that sends you over the top. You know what I mean?

DH: She might re-Tweet it and the next thing you know, that’s the one. So, you know I don’t care if it’s TheNew York Times or crazy-woman-who-thinks-she-has-a-blog, I’ll talk to anyone. That’s how proud I am of this book.

SS: It is an AWESOME book.

DH: Well, thank you so much.

SS: It is. And, when I read it, I kept hearing your voice.

SS: Well, yes, but it was like you were reading it to me. So that was a very interesting experience. I don’t think that’s ever happened to me with a graphic novel.

DH: I guess I have a distinctive voice.

DH: You know I think that’s the hard part about the book. Even though that it’s a true story. And it’s not an autobiography ‘cause it’s as-told-to; I told it to Scott Thompson ‘cause, I’m not a writer. He says he’s a writer, I had to believe him. Uh, but people said to me “This guy’s career is not going so well, so he might need this gig.” So, in the great tradition of as-told-to, we did an as-told-to book. But I think it’s a story of courage and redemption.

DH: It’s about a man discovering that he likes to be spanked.

SS: And I think that was a very interesting bit of it because there was this remarkable transformation…there was a pushing of the boundaries.

SS: Where you kind of have to test those boundaries.

DH: You sound familiar with those.

SS: I do. I am. …that might get edited out of the final version.

SS: And, in that respect it was very interesting. But I love the whole fantastical nature of your adventure.

DH: Well, you know, the thing about it is that whatever happens, I just work through it.

DH: And when you’re being beaten to within an inch of your life everyday for months, you have a choice to go insane or to somehow incorporate it into your life and make it work for you. So, I think that’s what happened to me. But then, as a result, now that I’m on the other side, I can no longer return to just vanilla sex.

SS: And that’s a very interesting transformation because you did say that vanilla was your passion.

DH: That’s how the book starts. You didn’t miss a thing, did ya?

SS: I cannot wait to read your further adventures.

DH: Because I’m here, so obviously you know I got out.

DH: So, there I am with my son and my daughter. My youngest son, who is now older than my little girl. That’s going to be trouble. And you know what’s going on with me and Killa, you know that there’s a very rocky road ahead. And the fact that my son and I are both sleeping with the same woman or want to. That’s awkward. The second book, it’s very bloody and there’s a war and you’ll discover a lot about why it was I was brought to this world. I mean because remember…where is it? [Checks his pockets] I thought I had a the magic disk but I forgot it, but you’re going to discover what that’s all about, who the gods are. What’s the destiny of Tondi and Danny. You’re going to discover…I’m sure you want Gloria back. The girl at the beginning…the Filipino girl.

SS: Yes, because I loved her.

SS: When I was reading her, she was only there for a bit

SS: But there was such a connection and I kind of had a bit of a girl crush, I have to admit that.

DH: Oh, we had such chemistry.

SS: It definitely came across.

DH: And, you know, that was the moment when I knew my marriage was broken. You know, she’ll be back. And, ‘cause, you know, don’t give too much of this away and also…eh, Aaron Douglas! How ya doin’? Do you know my friend Aaron Douglas here?

At this point, I’m sad to report, Danny/Scott stood up and walked over to meet Aaron Douglas. Unfortunately, due to the background noise levels, my laughter, and the distance from the microphone, most of what follows is unintelligible on the recording (mostly due to my laughter).

DH: Yes, we do. [Aaron Douglas waves goodbye and departs; Danny turns to me] Well, that was exciting. That was Aaron Douglas. Chief from Battlestar Galactica.

SS: Ahhh, I thought I recognized him.

DH: Yes, it’s a very good show. And he’s right beside Kate Vernon who is Colonel Tigh’s wife. [Motions behind me] And look at those right there [Katherine Curtis of the Naked News, is standing in front of Dustin Diamond’s booth, wearing her red PVC Super Nerd Girl Costume] 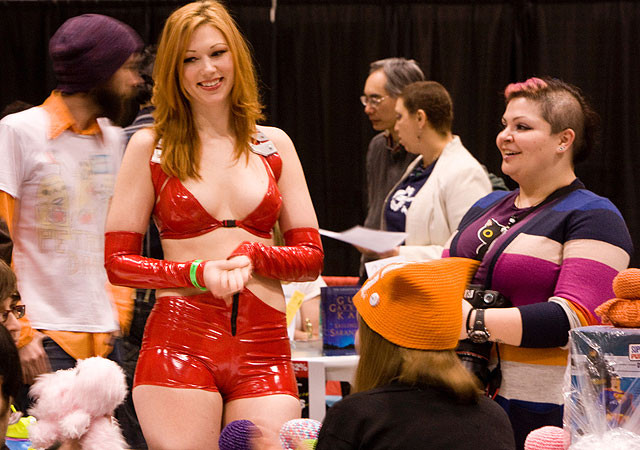 DH: It’s difficult for me.

SS: It’s difficult for me too.

DH: You know, I’ll tell you something. One of the things that my experiences in The Hollow Planet taught me is that sexuality isn’t as black and white as I thought it was.

SS: And that, actually, is extraordinary for a man. Women, I have found are able to go back and forth.

DH: Oh, women are allowed to be bi[sexual] until the cows come home

SS: But men…there’s this very dichotomous thing. In fact, there’s a lot of people who are like “Men can’t even be bi[sexal]” which I think is crap.

DH: Oh, of course they can.

SS: No. Well, all they think they need is a good deep dicking. I find that really offensive.

DH: Thank you so much for your time.

SS: Well, thank you, Shelley. We got into some territory I didn’t expect to.

DH: Well, I always try to push those boundaries.

DH: Thank you very much. Nice talking to you.

SS: Nice to talk with you.

Shelley Smarz is a comic book scholar and business woman. Kids in the Hall was an integral part of her life from 1988 to 1994. She’s still glowing from this interview (also, she lets out an occasional “Squee!”).