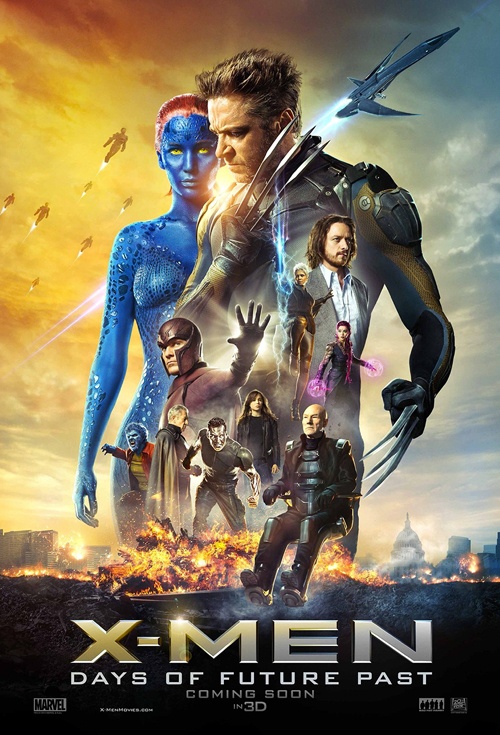 One of the benefits of discussing movies after their release date is that you can actually talk about things. So, as is custom, here is your spoiler warning: do not read any further if you haven’t seen X-Men Days of Future Past yet and would like to be surprised when you get a Bluray in your stocking at Christmas. For everyone else I thought I’d share some thoughts on the flick, the franchise, and comic book movies in general.

Two things struck me above all else when I watched the movie: first, this movie would be completely inaccessible for someone coming to the franchise for the first time, and, second, this movie is only possible in the current state of comic book movies.

Before I go further I should say that I enjoyed the movie and felt it was a solid entry in the cannon of the X-movies. However, I was continually aware that a lot of what worked for the movie and brought me enjoyment as a viewer was based on my knowledge of all the X-Men movies. I loved seeing every character from every X-movie make an appearance (well almost every), and I felt it was a wise choice to use Wolverine as the connecting piece to every X-Men story. Because there have been a lot of stories.

Time tends to move fast, and we forget that it was actually 14 years since the first X-Men movie hit the silver screen. Since then we have seen new characters introduced, old characters die, nonsensical origins thrown at us, and a partial reboot. Surprisingly, Days of Future Past makes this all work. Or, that is, it nicely uses time travel as a device to correct anything that was stupid or hated from the previous 6 movies. By the end of the movie we see Frasier Crane as Beast again, Jean and Scott still alive, and Rogue is dating Iceman instead of werewolves and vampires. It looks like a reverse What If? story where everyone ends up happy.

But back to my first point: this movie requires you to have a pretty solid knowledge of the X-Men and previous movie stories to really get the most out of it. If I were a moviegoer coming to this for the first time I don’t know if I would have liked it. It might have seemed too muddled, too filled with stuff. In this way the X-movies are now suffering from the same problems facing comic book themselves, an overburden of continuity. Enough movies have been made that we are looking for a new jumping on point. While one was technically created by First Class I would say that any sort of reboot was undone by Days of Future Past. The movie strains and at times groans from the burden of continuity, but it never breaks, and in the end you leave with a smile on your face knowing that the awful Last Stand movie didn’t really happen.

Beloved stories such as Days of Future Past are only possible in today’s cinema. That it, they simply would not work as a first entry in a series. You need the set up, the familiarity with the characters, the years and years of history to make such a big story work. This is the exciting other side of the continuity conundrum. For every moviegoer that might find your franchise less accessible during those big stories you will have a loyal fan who will be incredibly excited that one of their favourite storylines is coming to the big screen.

You can’t start an Avengers movie with the Infinity Gauntlet, but you can build up to it so when that story arrives it has incredible impact. Long form storytelling in movies is almost unheard of in this way. Yes, there are 20 plus Bond movies but you can watch then out of order and still get the same thing out of them. Bond is frozen in time, with only a slight nod to continuity in terms of his dead wife and vengeance against Blofeld. What Marvel has done with the Avengers movies, and now what Fox has done with the X-Men franchise is impressive.

As a final note I also thought that the post-credits scene was also only possible given the audience’s familiarity with comic book movies. In ancient Egypt a group of people chant En Sabah Nur while a cloaked figure with a blue face uses telekinesis to build the Great Pyramids. In the background four horsemen look upon the work of the cloaked figure. The name Apocalypse is never used, the visuals are not the character’s modern costume, and unless you had any idea on some aspects of this character you would be hard-pressed to know what that scene was supposed to mean. So a post credit scene (which has become a genre convention) is really only for the hardcore fans. It entices and makes an attempt to create a guaranteed audience for the next film. Samuel L. Jackson ushered in a new part of superhero movie making and the teaser cameo first appearance is now just as much of a movie as SFX or outlandish costumes.

Given the incredible success of the Marvel Cinematic Universe, Warner Brothers and DC are trying to follow suit with the next Batman/Superman movie. The slow growth of a universe will be rushed but the payoff for DC will be a JLA vs Darkseid movie. And then, after several missteps, we will see a Crisis on Infinite Earths movie where Henry Cavill and Ben Affleck will share the screen with Brandon Routh and Christian Bale.

I joke but that is sort of where we are heading, isn’t it? After all, if comic book series need a new number one to attract fans and increase sales won’t that be the inevitable result of an expansive cinematic universe?