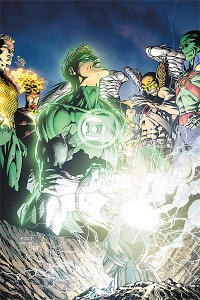 Hey everyone. I’m back again this week to review Geoff Johns and Peter Tomasi’s follow up to their Green Lantern epic, Blackest Night. For anyone who skipped out on this series throughout the last year, Blackest Night explored the emotional tethers of sentient life, focusing on the life and death of characters in the DCU. More, the series and really Johns’ entire run on Green Lantern has focused on the power of emotion manifesting through power rings empowered by rage, greed, fear, willpower, hope, compassion and love.

This dynamic was developed over the last two or three years from the conclusion of Johns’ highly revered Sinestro Corps War in 2007 and continued through the main GL titles. The story arcs came to a head last year with the beginning of Blackest Night, an event which saw the DCU’s fallen characters, hero and villain alike rise from the dead with empowered black rings. Their goal? The destruction of sentient life. By the end of the series, their intentions were clear. Pain was equated to life and its emotional tethers, while the abyssal void of nothingness came to represent what the Black Lanterns and their lord wished to accomplish. To this end, they looked to resolve the greatest travesty, the greatest hindrance of the universe; life itself.

One of the key moments for me was a page in Blackest Night where I believe Barry Allen said at some point each character who had returned from the dead did so because they wanted to; they desired enough to live that they brought themselves back from the brink of nothingness and returned to life, a theme which has been explored in part so far in the follow-up story to Blackest Night, Brightest Day.

Brightest Day is a bi-weekly series written by the two Green Lantern scribes which follows a collective of characters who returned to life in the final issues of Blackest Night. These characters include Hawkman, Hawkgirl, Aquaman, Ronnie Raymond (the original Firestorm), Martian Manhunter and Boston Brand, formerly Deadman. Jade, Captain Boomerang, and Maxwell Lord also returned in Blackest Night, but their stories are told in JLA, Flash and Generations Lost respectively and don’t appear in this series. 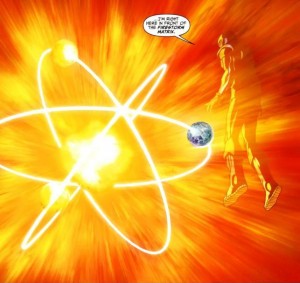 So far the story has followed these characters as they reacclimatize to their lives. Each faces certain challenges in the aftermath of Blackest Night. An example being when the Black Lantern Ronnie Raymond killed Jason Rusch’s (the most recent Firestorm) girlfriend after merging with Rusch to become Black Lantern Firestorm. Raymond must now face that responsibility when attending her funeral. Boston Brand in particular is searching for purpose as he ponders his return from the dead, while the mysterious white lantern rests in a crater in New Mexico waiting to be taken by one worthy to wield its powers. Each returned character appears to feel after effects from their time as Black Lanterns in Nekron’s army, however despite the breadth of characters included, the focus of the series appears to be Brand who after being dead for so long, is forced to ponder what it means to live and be alive. Truly alive. The white ring he wears guides him along on his Scrooge-esque journey where he witnesses the cruelty of humanity, while also witnessing the challenges each of the returned heroes  grapple with. 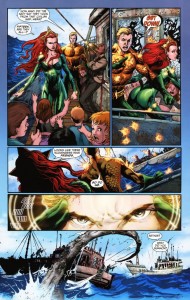 It appears the crux of this story calls back to the Barry Allen reference I made, where at some point each character ranging from Superman to Hal Jordan, made the decision to live. When asking what it means to live and die, we must also ask ourselves whether can we be alive for all intents and purposes, but remain dead all the same? That’s an interesting story on its own, one which I look forward to watching Brand grapple with as the series develops. We even see Brand in the fight of his life, against a fairly large and tall order of nasty.

The series isn’t all roses for me though. Despite my love for everything Johns has done on Green Lantern, I’m having a hard time getting into the stories. I say stories, plural, because the issues breakdown similarly to Countdown to Final Crisis in 2007-2008, where several stories are going on simultaneously and are told each issue a couple of pages at a time. I don’t think the concept worked well then, and perhaps less so now. The characters’ interactions with their environment appear secondary to Boston Brand’s King Arthuresque rise to greatness, functioning underwhelmingly to supplement what I consider the real and only story worth reading. Although each have their fanbases, and although I enjoy any exposure Firestorm gets, I don’t think any of the characters really have the legs to carry this book and maintain interest for readers who aren’t already in love with those characters. 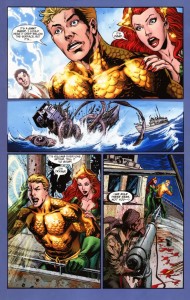 I like what Johns is trying to do conceptually, but I have a hard time caring about the overall breadth entirely because I don’t care about the other characters, save Brand and Firestorm. I’m sure others may feel the same about their own favourites in the series. The problem I have with the series so far centres on its format. I don’t feel like it worked well before because the books tried to do too much, and cram too many stories into a single issue. Together with my lack of interest with some of the characters, I find myself skimming through much of the issue looking for the characters I want to read about, and the stories I want to read.

The series would be better served to be shortened, and focus more on Brand’s ascension as the white lantern, but it feels like DC will continue this format through to the end. Despite flashes of interest such as why Aquaman can summon zombie marine life, or why Firestorm exploded, I can only hint at the larger story since none of it has really had the time to develop. It seems like the stories involve the psychological effects of facing death, with each facing their own obstacles as they struggle to live. We’re only a few issues in though, so we’ll just have to see how this develops when issue four comes out in two weeks. Yet at this point, it’s hard to recommend Brightest Day to anyone other than fans of the characters, or to long time Green Lantern readers like myself. Its format makes it too difficult to get into the stories and care about Johns’ vision for Green Lantern as it expands into the larger DCU.  Until next time.