Dylan Dog Investigates His Way Into the Big Scream … er I mean Screen.

Early reports are coming in about a big screen version of Italian comic creator Tiziano Sclavi’s title character about the “nightmare investigator”, in Dylan Dog: Dead of Night.

The character investigates nightmares and paranormal type activity. However it’s not like say Hellblazer or Hellboy (hmm a theme here…) Dylan Dog is a regular human who helps out the undead, vampires, werewolves and such all live together in harmony. When the balance gets disrupted, Dylan Dog is there to help out.

The character will be played by Brandon Routh, who of course had previous ties with comic movies playing the Man of Steel in the 5th Superman movie directed by Bryan Singer. 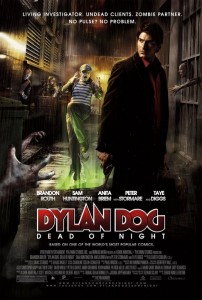 The new movie will be directed by Kevin Monroe who is also no stranger to comic movies as he directed the TMNT Animated Movie.

I encourage you to check out the trailer to judge for yourself how this movie will turn out. After viewing it myself, I can’t say it’s going to be an Oscar contender for any category, special effects and make up included. However it does look like it will be a great Sunday afternoon, popcorn munching, couple of hours of escapism.

Dark Horse Comics reprint the series in an attempt to get North American audiences interested in 1999. But sadly it only lasted 6 issues with one more issue coming out in 2002.