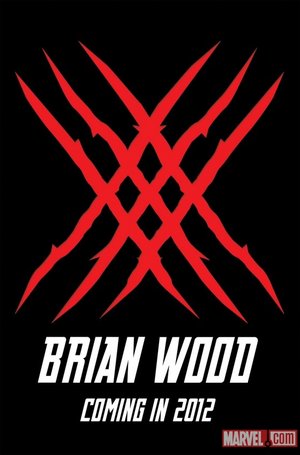 Marvel announced a new title at their X-Men panel at Fan Expo on Aug. 27.

A hush overwhelmed the crowd as Arune Singh, Marvel’s director of communications, asked that the room’s lights be dimmed, directing the crowd’s attention to the projector screen. After several anxious moments, two sets of claw slashes faded onto the screen, strongly indicating a new Wolverine project is potentially in development.

The panel, also consisting of Marvel editor-in-chief Axel Alonso, Senior Vice-President of Creative Development C.B. Cebulski, X-Men editor Jeanine Schaeffer, and Schism writer Jason Aaron, didn’t elaborate further on the reveal, other than confirming Brian Wood would be joining Marvel and would be writing the project in 2012.

Wood is best known for his work on DMZ and Northlanders, two of DC’s more notable titles under the Vertigo imprint.

Alonso confirmed the Schism storyline was to bring a new dynamic to the world of the X-Men, but noted that it wasn’t something where there was going to be a gray area.

“It’s not the kind of schism where you can do that,” Alonso said in response to a question asking whether any of the X-Men will switch allegiances between Cyclops’ vision and Wolverine’s vision. “You can’t just jump back and forth.”

While details are still scarce on where the story is heading, Marvel recently released a series of X-Men title covers post-schism featuring the title characters surrounded by silhouettes of other characters, some of which are more distinguished and recognizable than others. The teams are being split into two teams, similarly to the early-90s blue team-gold team dynamics, only now the divide is more philosophical than tactical.

“Every single character has chosen a side,” Alonso said.

Jason Aaron, the series’ writer, said he enjoyed working on the new Hellfire club, adding it complements the story he’s trying to tell.

“Children are very much a part of what’s going on with both sides of the battle,” Aaron said.

While X-Men Regenesis will deal with the fallout of Schism, how we get to that point is the interesting part of the story as the mini-series develops. Singh promised a very a gritty battle between Wolverine and Cyclops in issue four of Schism, christening it as round one of their conflict.

“I don’t think Professor X ever stabbed Magneto,” Singh said, adding in the short-term and the long-term there will be conflicts, physical or otherwise, between the two sides that will reflect the decisions each has made.

Alonso believes though that neither Cyclops or Wolverine is necessarily wrong in their opinion of mutantkind’s state.

Singh added that this is a story that is essentially about Scott Summers and Wolverine, two of the X-Men’s alpha males who have been at each other’s throats either on the battlefield or over the same woman (in Jean Grey), or have been at each other’s sides hinging on a stable hint of mutual respect. The end result of the story is a tale about what happens, considering the landscape for mutants, when they disagree on a point.

Cebulski said although little is still known about who is siding with whom, nothing is set in stone and the rest of the silhouettes may surprise fans.

“There will be surprises on both sides,” he said.

Cebulski also confirmed that Fear Itself and Schism ending simultaneously was not an accident, wishing to ensure that they line up all their ducks in a row so Marvel can move forward with its big plans for the X-Men in 2012.

All photos courtesy of Andrew Ardizzi.