The 12th Annual Joe Shuster Awards were presented November 6th at the Forest City Comic Con in London, ON.

I’d like to thanks the Shuster Awards organizer Kevin Boyd and all the volunteers and members of the committees for their efforts in making the Shusters happen every year, and a big thanks should go out to Happy Harbor Comics in Edmonton and all the other sponsors for their support.

I was on hand for the ceremony and had the great honor of awarding the Harry Kremer Retailer Award for Outstanding Comic Shop to Calgary’s Another Dimension Comics.

Great comic book shops can create thriving comic book culture communities around them. These progressive shops champion the great medium of comics and successfully engage their communities. Another Dimension does a fantastic job of promoting comics and servicing the needs of comic book fans in Calgary, they are a well deserving winner of this year’s Harry Kremer Award.

A list of all the 2016 Joe Shuster Award winners are posted right here.

Also in attendance at the Awards was CBD’s Canadian  Whites collector and historian Ivan Kocmarek. Ivan was there to present a couple of Hall of Fame awards, Ivan and I are members of the Shuster Hall of Fame committee and we were both thrilled to see these deserving creators inducted into the Hall of Fame.

Ivan being ever so industrious, wrote up a summation of the Hall of Fame portion of the Shuster Awards.

Being the 75th anniversary of the Canadian comic book, 2016 provided the special opportunity to induct 3 war-time creators along with two more contemporary creators into the Shuster Hall of Fame.The event began with those Hall of Fame inductions and I was honored and privileged to present the first two inductions of Tedd Steele and Shirley Fortune.

Tedd Steele, of course, created the very first Canadian costumed superhero in April 1941 with Wolf Savage, albeit in a tabloid-sized publication and then went on to come up with Pvt. Stuff in Joke Comics, Woody and the Wolf in later issues of Wow Comics, and his signature character Speed Savage in Triumph Comics. On hand to receive the award was Tedd’s daughter Linda who traveled down from Ottawa and, along the way, picked up her Aunt Lois in Ajax. Lois, is Tedd’s younger and only sister (he had six other brothers) and she’s an energetic and clear-headed 91-year-old who, with the assistance of her home care worker (who was kind enough to drive Linda and Lois down from Ajax) and a walker, managed to get around and see some of the convention main floor afterwards.

Shirley Fortune is one of those mystery creators we haven’t been able to find much on but she almost always signed her credits as Ley Fortune. She was hired by Maple Leaf Publications and stayed with the company until the end of the run. She created Mono the Air Cobra in Rocket Comics about a skilled pilot fighting the Axis at home and abroad. After the war Mono morphed into Bush Pilot solving crimes around the British Colombia interior. Ley Fortune also took over artistic duties on Circus Girl from Bert Bushell in Better Comics late in 1944. Fortune also inked some of Jon Stables’ later work on Brok Windsor and Bill Speed and you’ll see the portmanteau style credit “Stabfort” in the opening panels.

Robert Pincombe had the honor of inducting his friend Fred Kelly into the Hall of Fame. Kelly, though late coming onto the Bell Features scene, certainly made an impact with his creation of swashbuckler The Blade in Joke Comics quickly followed by characters such as Steve Storms, Betty Burd, Clip Curtis, Cinder Smith and standout Doc Stearne who, in the last panel of his last adventure, became Mr. Monster and with the help of Michael T. Gilbert forty years after the fact, became Fred Kelly’s most enduring legacy. Present to accept the Award were Fred Kelly’s widow, Rita, and grandson, Robert. It was thrilling to see and meet more family members of these great Canadian war-time comic creators.

Ron Kasman was up next presenting to long-time friend Mark Shainblum who drove down from Ottawa. Mark has been a mainstay of Canadian science fiction writing and has operated in Canadian comics since the eighties. Mark put out the sci-fi fanzine Orion in 1981 and founded Matrix Graphics in Montreal soon after. Through Matrix he put out John Bell’s first book, Canuck Comics (which had an introduction by Harlan Ellison) and New Triumph Comics (a conscious tribute to that first era of Canadian comics) which introduced us to Northguard through the artwork of Gabriel Morrissette. Chapterhouse comics is collecting together and reprinting the Northguard stories as well as re-imaging Northguard with Mark’s help.

Next Kevin Boyd inducted Darwyn Cooke into the Shuster Hall of Fame. Darwyn Cooke has already won multiple Shuster awards (and a couple of Eisners) and it’s only fitting that he be inducted into the Hall of Fame directly after his recent death. Being a relatively contemporary artist Cooke is probably quite familiar to all of you and I could add little to his background other than he re-imaged Catwoman and worked on Batman, Spider-Man and Superman and multiple other successful projects. His immediate induction shows how valuable he was to the Canadian comic book community.

A great day and one of the best parts of the day was the milling around just after the ceremony where the winners and presenters all got to meet each other. 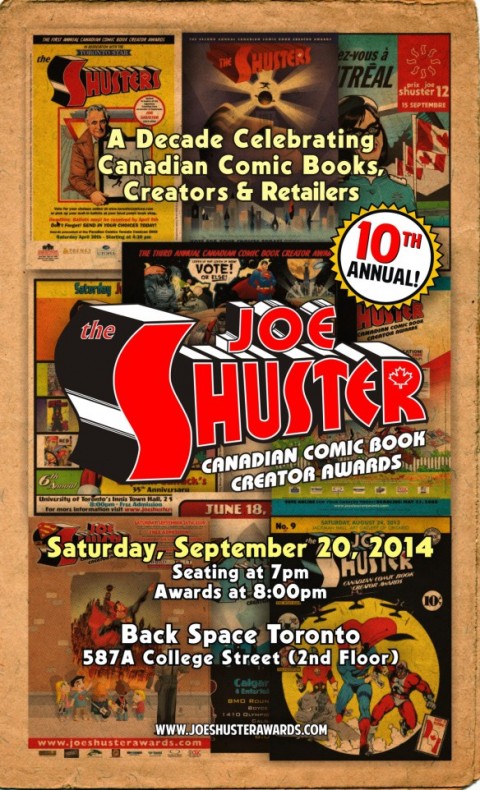 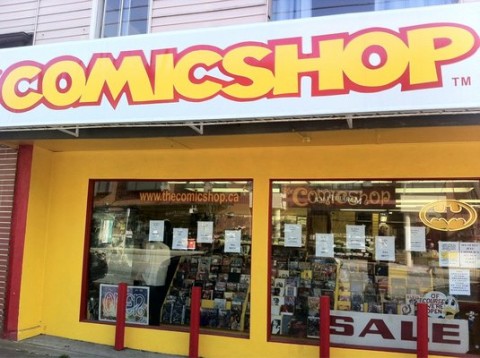