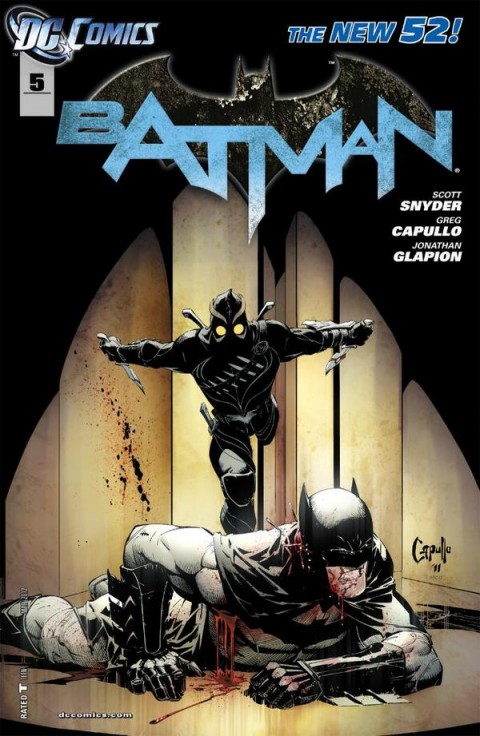 Batman is on trial as the mythic Court of Owls is closing in on the Dark Knight. Issue five of the relaunched series was released last week, bringing with it new revelations about the shadowy cabal purportedly to have run Gotham since the pioneer days.

Since he first donned the cowl of the bat, Gotham City has been Batman’s territory. That’s what he believed anyway. Unbeknownst to Bruce Wayne, much less the rest of Gotham, a mythic cabal called the Court of Owls has puppeteered the destiny of the city from the shadows. Now, with Bruce Wayne desiring to bring Gotham up from the sewage of its past, he himself has been targeted by the cabal’s resident assassin known only as The Talon.

In the week since his disappearance, the GCPD has maintained a constant vigil for Batman in the form of keeping the Bat-Signal lit. Meanwhile, Nightwing, Robin and Batgirl run themselves into exhaustion as they search for their mentor, while Catwoman worriedly gazes up at the signal high up in the Gotham sky. Elsewhere, Batman stumbles through a maze in the darkness, opting to remain in the shadows where the Court cannot find him. It is all for naught, as the lights turn on as he enters a room revealed to be pristinely white with a large statue of an owl guarding a small water fountain. He hurriedly gulps some of the water despite his better judgement, and continues onward to find a small memorial room decorated with plaques containing photographs of past targets of the Court. With insanity seemingly gripping him, Batman smashes the lens of a camera in the middle of the room and quickly retreats to the darkness. Down a corridor, he spies a group of individuals wearing white owl masks. Quickly giving chase and pronouncing his discovery of their existence, Wayne finds the illusion to be another trick of the maze, stumbling upon another lightened room with the surnames of many of his adversaries’ and allies’ ancestors from Cobblepot to Gordon engraved on the walls. In an adjacent room, Bruce investigates rows of coffins, each with a picture of a child placed on the top-centre of each. An open, empty coffin sends Batman reeling into another room, his senses overwhelmed by the realities barreling down on him. While reconciling with the revelation of the order’s existence, The Talon impales him from behind at the exact moment the Bat Signal bulb shatters on the rooftop of the GCPD building.

For a character well over 70 years old, there’s only so much left to be unearthed within the Batman mythos. Where Snyder succeeds is finding a way to fit his story into the DCU relaunch without coming up with a plot that’s considerably hokey or ridiculous in contrast to what preceded it. Snyder has managed to expand Gotham’s history even further beyond what was established in the Morrison run to really dig into the heart of Gotham’s plight over the centuries. Yet, despite the comic book backdrop, it’s a much more grounded approach comparatively to Morrison’s run. Although a classic addition to the Batman legend in its own right, Morrison’s over-the-top approach circumvented the realism of the story, an absent element to Snyder’s foray. It also introduces the idea of a shadowy cabal controlling Gotham’s destiny behind the scenes, injecting an Illuminatist tone into the Batman universe. What’s enjoyable is our finding, and subsequently watching it play out, that our conception of Gotham as Batman’s city is shattered. Reality as it’s uncovered is quite the contrary, and it’s an interesting and very realistic antagonistic piece of Gotham’s criminal puzzle yet to be explored. Amid the plot’s moving forward, Snyder successfully characterizes the importance of Batman to Gotham both in relation to keeping the criminal underworld in check, and to his allies. Although we see the range of emotions from them, the most touching perhaps is saved for the end of issue upon the Bat Signal’s bulb breaking, where Damian storms onto the rooftop and demands they replace it before he emotionally breaks down. It’s a little uncharacteristic of the character, but can either be deemed poor writing or a crack of emotion shining through the rough exterior of the younger Wayne. I choose the latter, and it is another example of the high quality work Snyder has put forth since his start on the title.

Artwork is everything to a comic, and Capullo finds the delicate balance between presenting highly detailed pencil-work with much going on in the panels without making them look boring or uneventful. Each panel in the issue is interesting, with work ranging from Commissioner Gordon and Bullock standing on the GCPD building awaiting the arrival of Batman, a worried look enveloping Gordon’s face, to the visibly shaken Damian and his increasing worry over his father’s disappearance. With the majority of the issue taking place inside the Court’s maze, the artwork jumps back and forth between light and dark, stressing the importance of the inking work supplied by Glapion. Thematically the contrast presents itself visually. Mirroring Snyder’s premise of light and dark, the owl being a predator of the bat, the art moves seamlessly between the shadows Batman seeks refuge in and the fully illuminated white rooms of the labyrinth. Capullo expands his palette of creativity a little further at various junctures of the issue, notably the sequence of pages where Batman moves from room to room. In one case Bruce gazes at a photograph of an old man; Capullo situates the panel rather well with Bruce’s reflection and the old man’s visage composing a Two-Face type dichotomous dynamic. It’s almost as though Bruce envisions himself in the man’s place amid his fluctuating sanity. In addition, stepping away from the nuanced creativity of the panel work, Capullo and FCD composed some fantastic artwork later in the issue when the owls begin to tear Batman’s costume from his body, or how in various pages we see The Talon close in quiet pursuit of his prey, creeping in the shadows Batman clings to so desperately until finally he attacks Bruce at the end of the issue. Batman #5 bookends the installment with another appearance atop GCPD headquarters, whereby it appears the signal shatters at the precise moment Batman is stabbed, bringing this book and its fantastic artwork to a close.

Batman is a book well deserving of praise. The title is a creative tour-de-force encompassing an engaging, original story combined with tremendous pencils, inks and colouring work. As one of the flagship titles of the DC relaunch, Snyder’s Batman has been able to maintain its integrity despite the editorially-mandated retcon of the universe and has provided an engaging, deep and intriguing story that expands the mythology of Batman, which at 70 years old is no easy task. Snyder’s work is commendable, and with each new issue the veil of his mystery is pulled back a little further to reveal a tremendously well devised, well plotted book.