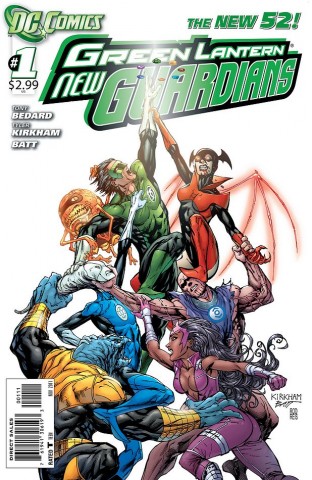 In the aftermath of the War of the Green Lanterns, Kyle Rayner was left without his girlfriend, and was escorted from Oa after defending the Guardians from an attack from Corps members hoping to assassinate Sinestro. Now off on his own, Rayner must new face challenges both from himself and from familiar allies and enemies alike.

Far off in the past of the Green Lantern Corps’ lore, the Guardians of the Universe are left devastated in the wake of Hal Jordan’s rampage towards Oa. Among them, the guardian named Ganthet struggles with his little remaining strength to stand up and create the (at the time) last Green Lantern ring. Ganthet travels to earth where he meets the young Kyle Rayner in a New York City alley way, having come outside from a nightclub to avoid the long line to get into the men’s washroom. Ganthet tells Rayner he has the ability to overcome fear, and bestows the ring upon him. Ganthet quickly gives Rayner a quick tutorial in ring slinging.

Present day, from across the cosmos members of various Corps lose their rings, while some lose their lives. As the Star Sapphire corps,’ and former Green Lantern antagonist, Fatality arrives to her comrade’s aid, she proclaims she will hunt the person responsible for stealing the ring. Back in New York City, Kyle is on patrol when he prevents a catastrophic accident from occurring when he catches a large crane with his ring constructs. While ensuring everyone is safe, Rayner is chosen by the various rings to wield them, but is attacked by Arkillo, Bleez, Fatality and Munk before he can process everything that’s going on.

Of the four Green Lantern books that have debuted as part of DC’s “New 52,” I feel as though this is the most accessible. Where the two main titles of the franchise, Green Lantern and Green Lantern Corps, are heavily mired in their own continuity and hit the ground running with their stories directly spiraling out of the two previous series, New Guardians takes the time to introduce audiences to Kyle Rayner properly, quickly retelling his origin story over several pages before launching into the necessary continuity. With that said, the issue felt like very little happened, due largely to it being a short book. Bedard’s sandbox does offer some opportunities to expand the Green Lantern mythology further  beyond the other titles, excepting Milligan’s Red Lanterns. Although the idea of the “ring chase” has been done, it hasn’t to this degree, now incorporating the other Corps into the story to a greater extent. The read was smooth and succeeded in creating a story I feel is accessible to new readers, while also creating a book that should appeal to fans.

The art team’s work on this issue shows a tremendous level of artistic range, creating highly detailed environments regardless of whether the scene takes place on a battleground or inside a local watering hole. From the first pages where Ganthet conjures a “final” ring for Rayner among the bodies of his dead brethren, Kirkham doesn’t disappoint. His fantastic pencils aside, Ruffino’s colouring work is amazing in this issue. I particularly liked the page where Rayner receives the ring, where the entire page is engulfed with uncontrollable bursts of green energy. It’s really something to behold, as are the previously mentioned pages of the Oan battlefield along with Ganthet conjuring Kyle’s ring. The closing pages continue the trend of amazing work, including the construction site scene where the construction worker constructs prevent the crane from toppling onto the crowd below. The book’s artwork is a highly enjoyable sight, one that shows that no book’s art can be carried by a single creator, rather truly strong artwork is a team effort; Kirkham, Ruffino and Batt provided a stellar effort that I look forward to seeing more of.

Bedard described this series as one he’s more than happy to pen, citing it as a fantastic opportunity to expand the Green Lantern universe to greater levels. Given the current standing of the Guardians, the title of this book is rather curious and perhaps alludes to a greater purpose for the story. The “New Guardians” have been referenced before, notably by Sodam Yat in the Legion of the Three Worlds story during Final Crisis. What precisely this means is hard to determine. Looking beyond what the future holds for this series, stripped down, the book is a fun, easily accessible book to new readers which perfectly accomplished what DC set out to do with their company relaunch. I especially feel like both Bedard and Kirkham are quintessential fits for this book and the Kyle Rayner character, offering a refreshing, creative take on the character that allows the Rayner character to breath outside the main titles combined with the promise of a strong story going forward.