To a Great-British Audience, Jonathan Ross (OBE) is synonymous with belly laughs and banter as – the voice of Friday nights on his, self-titled/award-winning talk show “Friday Night with Jonathan Ross” (Kind of, the British Late Show).  He also hosted a radio show for the BBC and (not without controversy) is generally regarded as a lovable funny-man in the British media.  So… when I recently discovered creator-owned series (slightly behind the curve) called ‘TURF’ I was surprised to read the names of the creative team involved –TURF – Published by Image Comics – written by Jonathan Ross, with Pencils by Tommy Lee Edwards… hold on… Jonathan Ross? The English equivalent of Jay Leno or David Letterman writes comics! This revelation (of sorts) got me thinking…

Set in Prohibition-era New York with a beautiful 1920’s backdrop, TURF is a fabulously fearless, blood-thirsty bust-up – staged under a curious, ‘cross-genre’ umbrella of Gangsters and Vampires.  It’s bold, British, stylish and marvellously moody.  I just picked up a copy of issue #5 (the final book in the series) and although it has been out for a short while now, there’s still a gentle buzz around the book at stores in London.  My copy was also signed by Ross himself as, it appears he was savvy enough to visit a few specialist stores and sign a bunch. 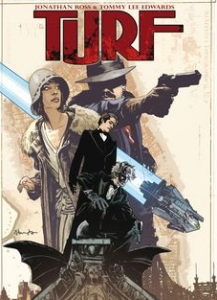 Generally received as the second best in the series (with issue 4 being the fan favourite) issue 5 is the crescendo of Ross’s homage to the ostentatious, blood-and-thunder horror comics of the 1970s with Ross’s own brand of stylised gore and moody violence splashed across the pages beautifully by Edwards’ art.  The finale hints that, Ross may even have more up his showbiz, fanboy sleeve  – he’s already planning a separate series set in a retirement home for Superheroes (which could be ‘make-or-break’ for the comedian – as a serious writer).  Ross told the Guardian: “My love affair with comics is more important to me than my work in TV, or just about anything outside my family. You’re hardwired for it, if you fall in love with comics when you’re 11. I just want to see comics getting a fair critical chance.”  TURF The Graphic Novel – is also easy to find in Waterstones on the high-street (the English equivalent of Chapters or Borders) – probably due to having Ross’ name smeared across the cover… which, undeniably bodes well for comics generally.

Obviously, this is nothing new… other ‘celebrities’ whom tried their hand at writing comics (to name a few) include… Rob Zombie – Samuel L. Jackson (collaborated with other writers) – Mark Hamill whom co-wrote The Black Pearl through Dark Horse, for which, there’s a movie on the way (according to Hamill anyway… sure there is Mark) –  and Bill Shatner, whom developed/co-wrote The Tek War Chronicles which, allegedly was fairly well received.

But do we like it when ‘famous’ people write comics? Would you buy a terrible comic penned by your favourite actor/musician? Or would you rather buy a quality product from an up-and-coming creator? I mean…would you buy a song by Grant Morrison just because it’s Grant?

A better question is who (from the land of ‘celebrity’) would you like to see write a comic? Or should ‘famous’ people just pipe-down and leave the creating to the creators?

Coming soon from Across The Pond: Doctor Who in Comics – an Exhibition @ London’s Cartoon Museum.  “Celebrating almost 50 years of his adventures in print – the exhibition hopes to solve a long-running mystery about the artists who first drew the strips.”