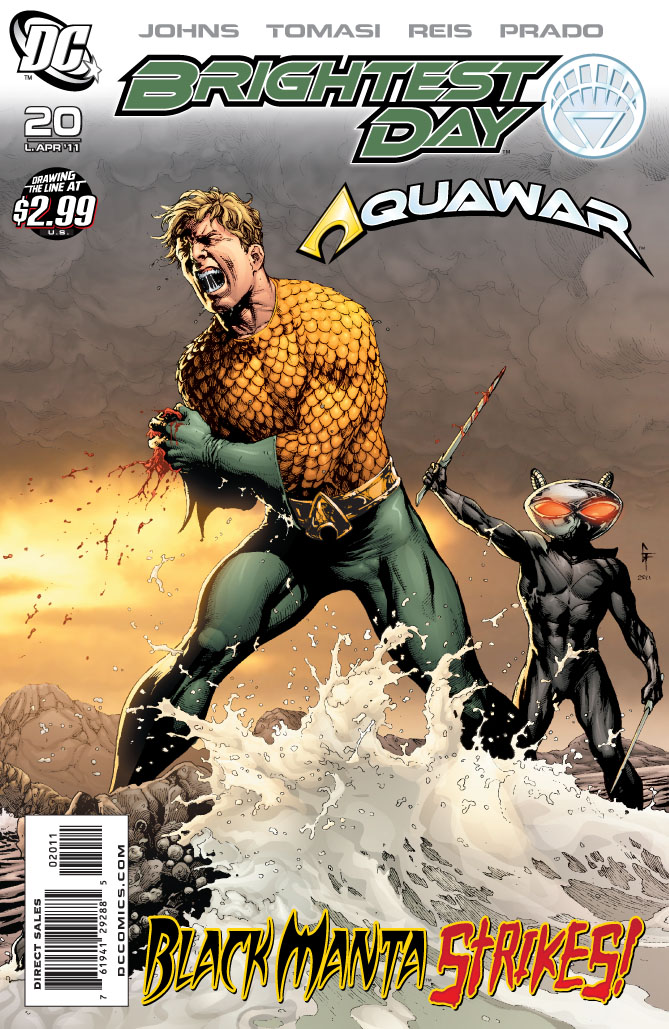 When we last left this series, Aquaman was not having a good day. With issue 20 again focusing on the Aquawar, we’ll see if Aquaman gets through this on his own, or whether he’ll perhaps need a hand. Onward!

Twelve heroes and villains returned from beyond in the wake of Blackest Night. Each has been charged with a task they must complete if earth’s greatest champion is to arise. Brightest Day stars Martian Manhunter, Hawkman, Hawkgirl, Aquaman, Boston Brand, and Firestorm as they search for the brighter sides of life.

Ouch, that had to smart. With his hand again severed, Aquaman is left at the mercy of Black Manta. As he’s about to strike, Jackson leaps into the fray and tackles Manta before he can strike a fatal blow to his longtime nemesis. After a quick physical exchange leaving Jackson at Manta’s mercy, Mera and Aquagirl arrive to help stop the Xebelian forces. Aquaman asks Jackson to cauterize his wound with his super handy electric eel powers. Together the four beat back the Xebels into the ocean, but give chase. They continue to assault the Xebels, and are able to bide Jackson some time to allow him to close the Bermuda Triangle with the Xebels and Manta inside.

With the threat over, Aquaman gathers his allies and they talk about being outcasts to both the surface and underwater worlds, but no matter what they’re together; none of them is truly an outcast. Aquaman and Mera embrace, activating a message from the white entity. It tells Aquaman that his mission is accomplished and his life is returned. Brand arrives under the sea, and is forced to blast Aquaman with his white lantern ring. Aquaman disappears in a cloud of white dust as a distraught Mera screams his name at issue’s end. 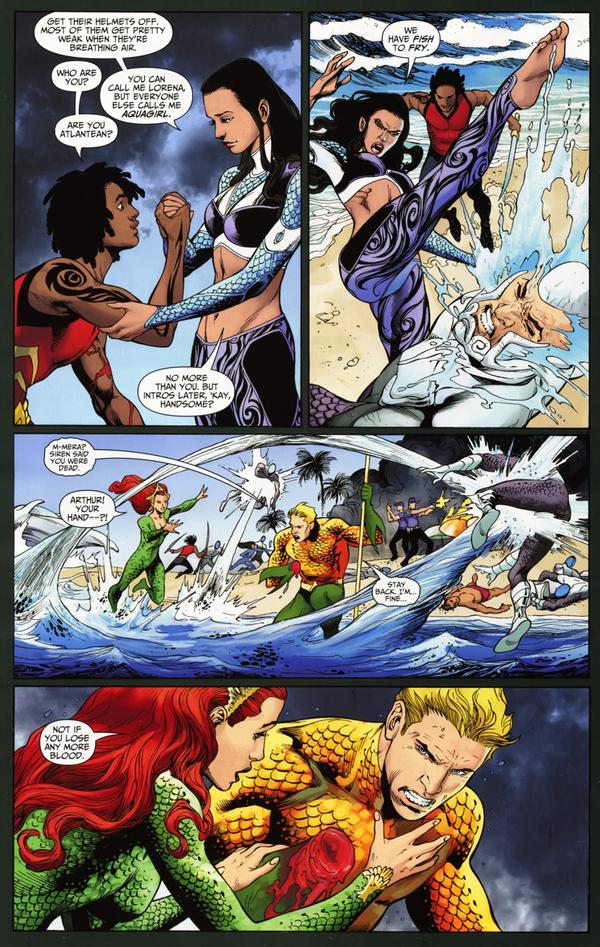 For the second consecutive issue, Ivan Reis and Joe Prado split the art duties. Their styles are fairly similar, making it somewhat difficult to distinguish one from the other for most of the issue excluding Reis’ obvious hallmarks.  Regardless, the issue offers some great visuals from beginning to end. Mera’s shark water constructs attacking Black Manta, the electricity emitting from Jackson as his powers activate or as he cauterizes Aquaman’s wound, the immensity of scope of Mera’s attempt to hold back the ocean, up to the splash page of Aquaman attacking with his army of undead marine life; each of these specific pages were really well done.

The page layouts were fairly eclectic though, ranging from rather impressive works to mostly uninspiring and altogether boring pages. Although not the case throughout the entire issue, some pages are cookie cutter boxes that pale compared to the more creative pages sprinkled throughout the issue. One other effect I noticed towards the end of the issue was the dull colouring during the underwater scenes. I don’t feel like Steigerwald and Eyring captured the effect they were shooting for and the pages are relatively bland compared to the other and altogether better underwater scenes in the issue.

With issue 20 behind us, we have seemingly also left the Aquaman story behind at least for now. In this issue he met a similar fate to Hawkman and Hawkgirl in issue 18. Johns and Tomasi are starting to add a level of intrigue as Boston Brand’s larger role in acting as the entity’s perpetual executioner is revealed. I felt like the issue was written and executed rather well, as has been the case uncharacteristically for the last few issues. It’s fair to say that this issue has continued the recent trend of worthwhile comics within this series, which at least for the majority of the time has been filled with throwaway issues.

The issue nicely tied the Aquaman story together, which I felt was fairly well written but was still subject to a fairly predictable plot from beginning to end. First, Jackson’s role as the new Aqualad was extremely obvious from the beginning. The one thing within the story that was left unaccounted for was Arthur Curry’s role in the story; Johns and Tomasi’s strong allusions to Curry’s fate in the previous issue combined with the Hawks’ fate made the unfortunate end very predictable. 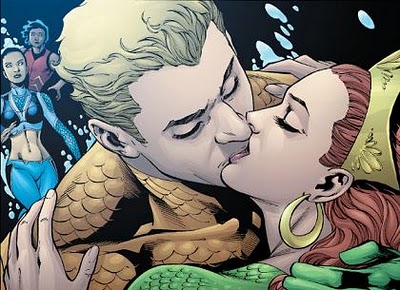 We’re left to wonder with only four issues left in the series whether their fates are as obvious as they seem to be. We may not get closure for another issue or two, as it seems the team decided to bring the story back to Martian Manhunter. This doesn’t bode well for the story or the artwork in the next issue. I felt that this was the weak link in the story from the beginning, and the only one I consistently could not get into. Where Aquaman and the Hawks were given strong emotional send-offs, I’m expecting  much less from Tomasi and Gleason in issue 21.

Altogether the series is definitely at its high point and is as good as it could possibly be, and should have been from the beginning. Let’s hope the series continues on and ends strong with only a few issues left to go.