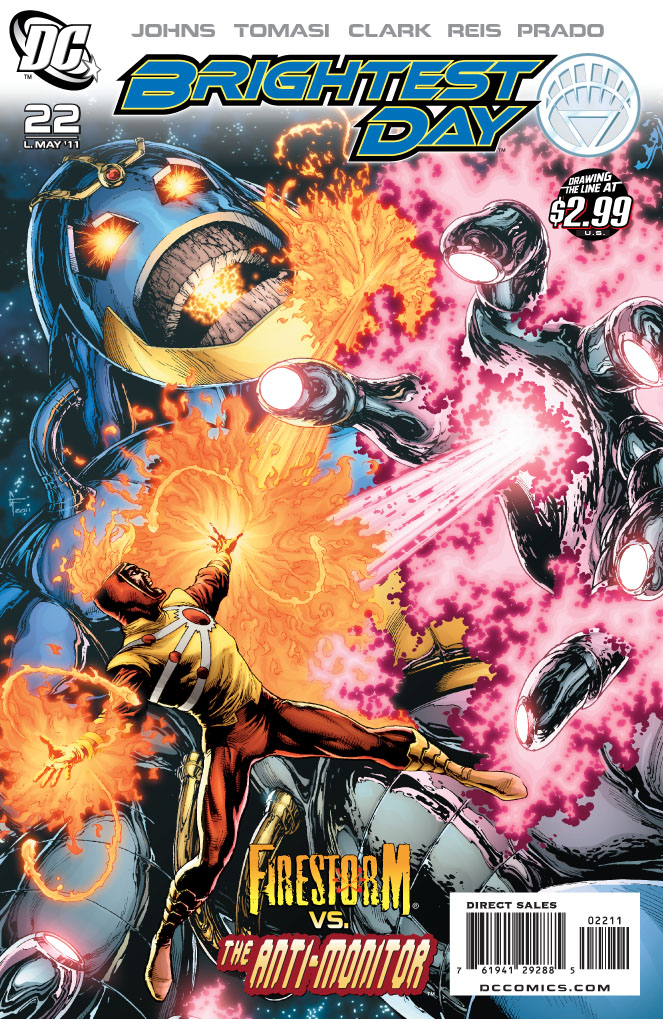 Issue 22 of this year long maxi-series is upon us. If you’ve been following along since issue zero, you’re a trooper. If you’re just jumping in now (for some reason), run! Wait for the trades. This is Brightest Day folks. It hasn’t been perfect, but what in life is? That felt like a natural segway if I ever saw one. Onward!

Twelve heroes and villains were resurrected in the wake of Blackest Night. Each was charged with a task they were to complete if earth’s next champion was to arrive. Heroes and villains have fallen, and new heroic teams will rise along with earth’s savior.

Deathstorm takes the opportunity to belittle Ronnie, quickly changing focus as he attempts to transmute Jason into salt. Ronnie leaps in front to protect Jason, but another character leaps into the way and takes the blast for him. He slowly begins to break down into salt, imparting a final message of encouragement to Ronnie before crumbling into a pile. Again merged with Jason, Ronnie resolves to kick the Black Lanterns’ bottoms, but is interrupted by the white entity who disintegrates all the black lanterns in the area with a blanket of white energy. The entity transports the boys back to the Star City forest, where a voice from behind them instructs them to hand over the lantern. Firestorm turns to see Boston Brand readying his ring, while the entity encourages them to listen to him.

One of my greater joys throughout this series has been looking at Scott Clark’s work whenever Firestorm’s portion of the story comes up. Clark’s work has been consistently fantastic throughout the series and considering the majority of the issue is penciled by Clark this one’s no different.

From start to finish I’m comfortable with gushing about his work, which combined with Steigerwald’s colouring offers the best artwork in the series. The Anti-Monitor two-page spread on page two and three is dark and creepy with the Anti-Monitor surrounded by the Black Lanterns as he tries to harness the white lantern’s power source. Each scene with the Anti-Monitor feels this way as the ultimate DCU enemy callously struggles to obtain the lantern’s powers. Each panel shows the absolute emptiness within his armoured shell when you gaze into his eye sockets.

One of the coolest things about Clark’s work over the entire series has been how he’s drawn the fiery elements of Firestorm whether their flaming head or their powers are the central focus. One example early in the issue has Firestorm shooting a fiery wave from their left hand. The fireblast envelops the top portion of the page and looks strikingly realistic. The same effect is a consistently cool looking experience regardless of how it’s used on the pages. Clark also has a great grasp on other energy type effects such as Anti-Monitor’s blasts,  hydrogen gas surrounding his head after Firestorm blasts him, the energy blast that hits another character, and subsequently that same character as they gradually turn into salt. They all kind of pop-out or distinguish themselves on the page contrasted against the backgrounds.

Reis and Prado bat clean-up in this issue. Their work pales a bit compared to Clark’s, but overall it was okay. I didn’t really like Reis’ Firestorm landing in the first panel. It lacked detail and looks rushed. The remainder of their work was better, especially the final page with Brand. As a whole the artwork was solid again; the one consistent running theme throughout entire series save for one storyline’s artwork. The page layouts were rather drab though, relying almost exclusively on horizontal panels throughout the issue with scarce deviation.

Continuing the trend of the last few issues, this issue brings a single character into sole focus similarly to Aquaman, Hawkman and Hawkgirl, or J’onn J’onzz. As with those arcs, we saw a measure of resolution  to the Firestorm story arc as Ronnie and Jason joined the ranks of returned heroes who have completed their mission. In this case, Ronnie and Jason finally were able to work together as Firestorm.

I thought it was a good issue as a whole. Yet with all the focus on the Black Lanterns throughout the latter half of the series, I can’t help but feel like they were cast aside like yesterday’s news after being the terrors of the DCU only last year. Each of them were destroyed quite easily by the white lantern. I have to then ask, what purpose did their return actually serve? They certainly didn’t need to be part of the story in order to get the white lantern from point a to point b. They felt wasted, and I question the notion to bring them back at all if this was going to be their fate.

On another note, the death train continued along the tracks with this issue as another long standing character  in the DCU bit the big one. I presume this is intended to merge the Firestorm fans still fighting over whether Jason or Ronnie should be Firestorm and form a solid fan base. If this partnership is continued in some sort of series, it should please both sides if they’re sharing Firestorm duties. This was the predictable ending I expected though.

The issue was a good read with great action and a steady pace despite the minor holes in the story. With another story arc wrapping and only two issues left, I’m not sure of the role Firestorm and J’onn are going to play in these two issues, much less Brand’s role. Is he the savior, or just the avatar? We’ll have to wait and see I suppose. Stay tuned!