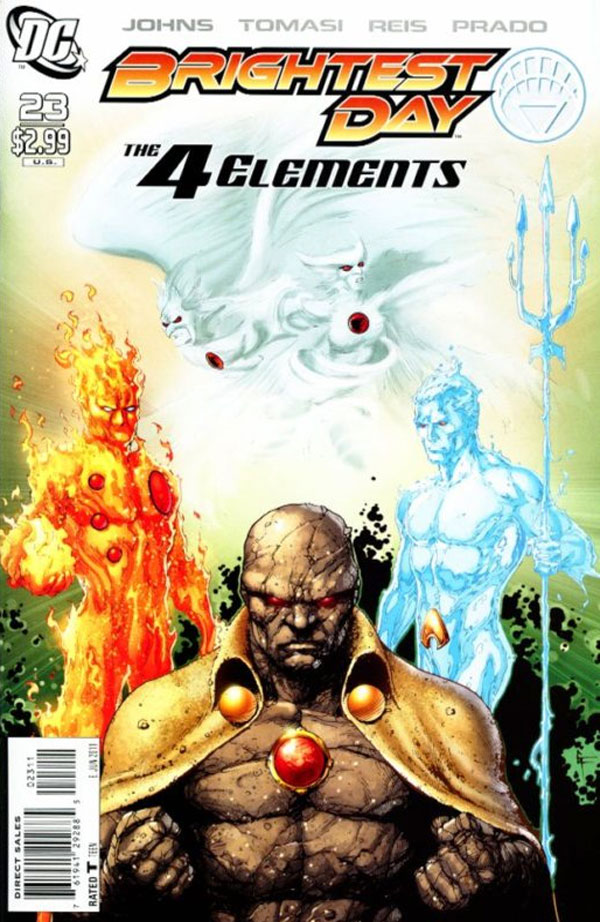 After nearly a year of reviewing this book, you know the drill CBD fans. Here I am for the penultimate time with my review of the polarizing bi-weekly maxi-series we know simply as Brightest Day.

Twelve heroes and villains have their lives returned in the wake of Blackest Night. Each is charged with a task they must complete if earth’s ultimate saviour is to arrive in time to save the DCU from the dark avatar that spells their doom. This is Brightest Day. 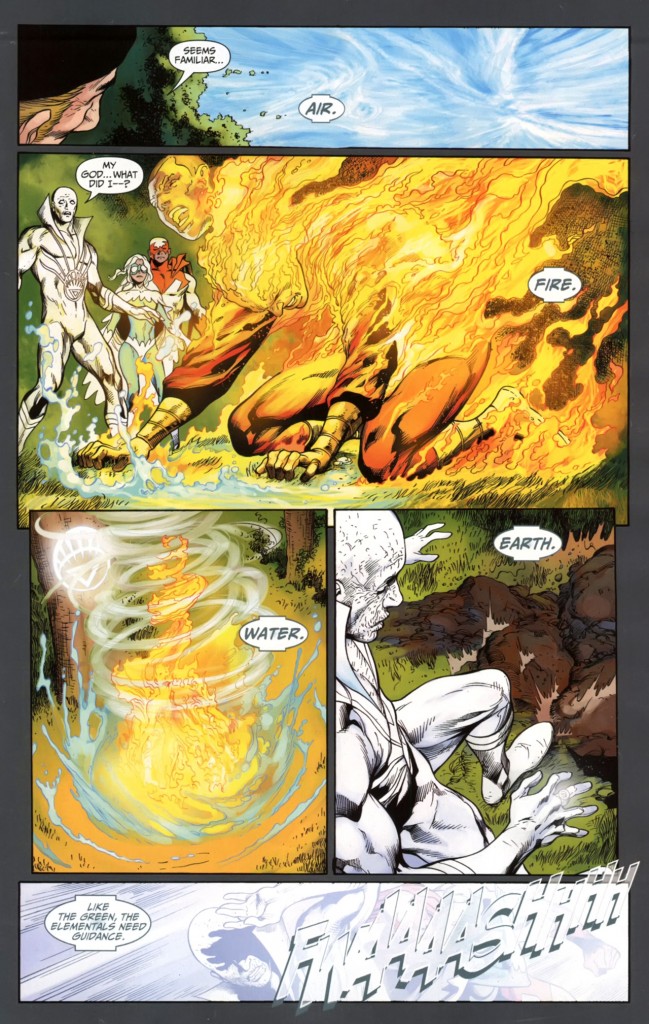 DC’s heroes continue their attempts to control the global devastation plaguing the earth; meanwhile Firestorm is confronted by Boston Brand in the Star City forest. Brand politely requests that Firestorm had over the white lantern. Hawk and Dove are quickly transported to the forest and placed alongside Brand and Firestorm just as the dark avatar arises from the earth. It begins its rampage toward the forest and attempts to enter it. Back in the middle of the Star City forest, Brand’s white power ring blasts Firestorm similarly to the Hawks, J’onn and Aquaman. Firestorm turns into a fire elemental, while the other characters return as wind (Hawkman and Hawkgirl), water (Aquaman) and earth (J’onn J’onnz) elementals. The elementals move on to stop the Dark Avatar from proceeding, while Brand, Hawk and Dove remain behind to protect the tree, not realizing that Captain Boomerang has also been teleported to the forest. As the elementals begin fighting the avatar, earth’s savior rises from his grave at the foot of the tree. Earth’s ultimate savior arrives in the form of Alec Holland, better known as Swamp Thing. 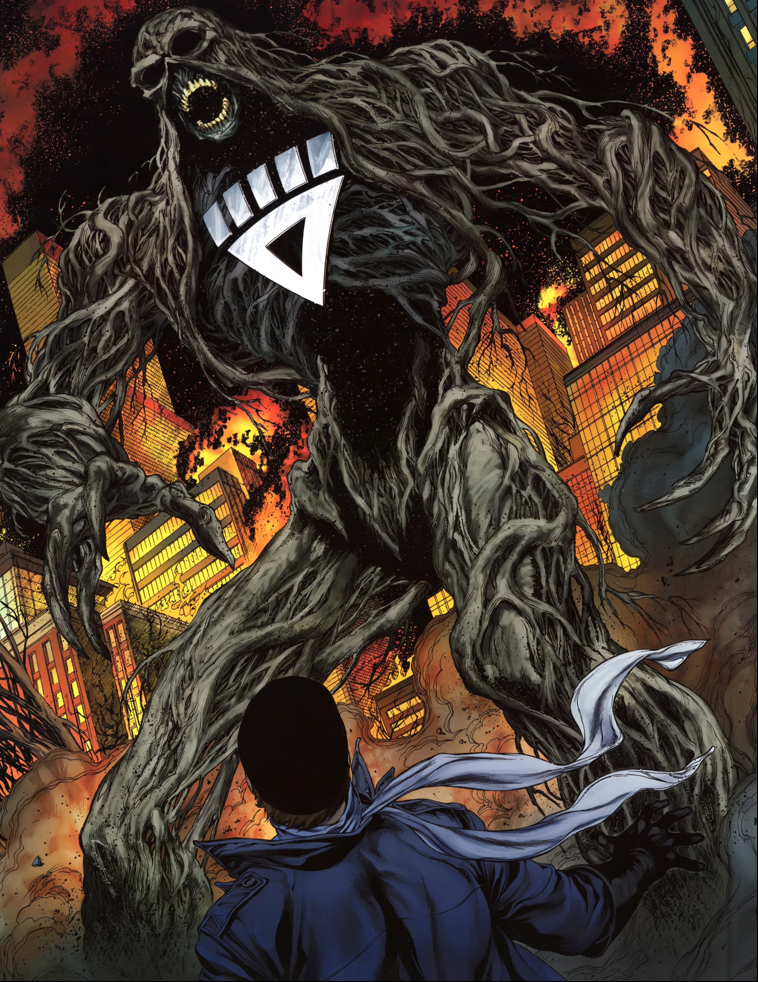 Prado and Reis carry the artistic load in this issue and put forth some great work. The artwork is very well detailed as a whole and is easily some of the best work of the entire series.

There are several instances throughout the issue where Prado and Reis outdo themselves. From the first time we truly see the Dark Avatar onward, they deliver some fantastic, awe-inspiring visuals. The two page splash of the avatar is especially well done, as are the following pages featuring the wake of its destruction as it moves deeper into the forest. Prado and Reis take their work to the next level beginning with Firestorm’s transformation into his fire elemental form, with the two page spread of the other “transformed” characters in their elemental forms given them another opportunity to shine. This page nicely contrasts the respective earth, wind, fire, and water elements of J’onn, Aquaman, Firestorm and the Hawks. Another great piece of work in the issue features the elementals fighting the dark avatar, while the issue ends with a grotesque revival of Alec Holland, commonly known as Swamp Thing. Prado and Reis took this issue’s art to another level, and I commend them for it. 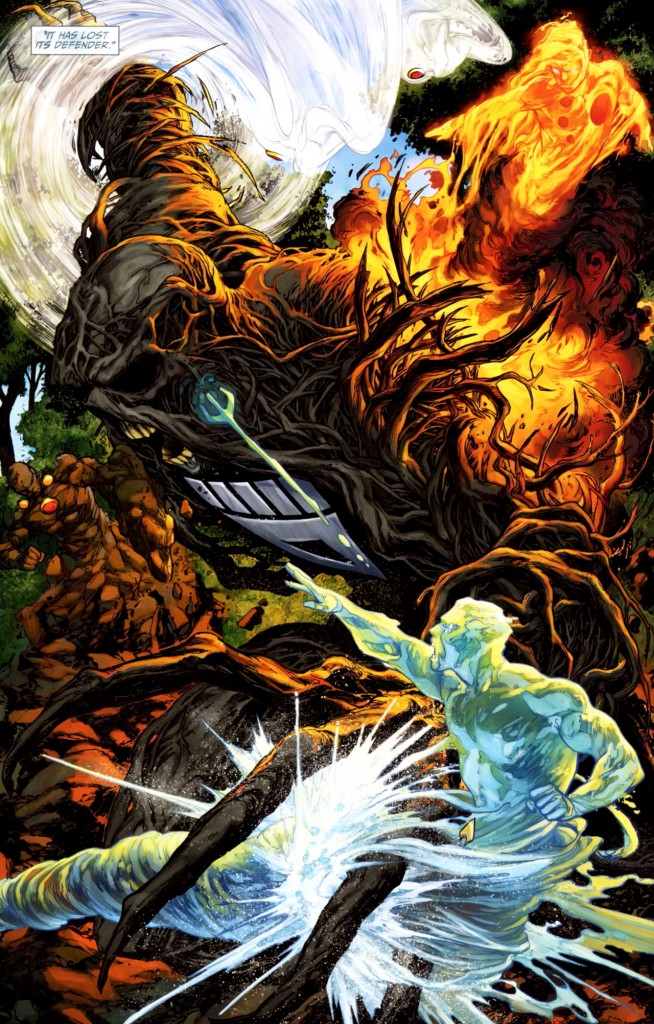 I hereby fail this series for ripping off Captain Planet. Seriously? Earth, wind, fire, and water? What, is Holland supposed represent heart? Or is he Captain Planet in this scenario, and is Brand heart? Joking aside, this turn of events is disappointing. If you’re lost on the references, just look them up. You can hate me later.

Swamp Thing is an obscure character, despite being a fairly well renowned creation whose classic ’80s series was notably helmed by esteemed comic creator Alan Moore. Yet, if this is the grand reveal of the series and Alec Holland (Swamp Thing) is earth’s ultimate saviour, I’m left wondering who actually cares about this revelation. I didn’t feel any sort of excitement or intrigue, rather I felt apathetic and rather nonchalant about it. For a series that has been building up to this point for nearly a year, it felt lacking. Moreover I’m left to wonder what role the elementals and Brand will now play. Brand especially has just become largely irrelevant on the surface of this story development. Perhaps they are Holland’s avatars, perhaps they’re their own little Justice League type team (of planeteers). Who’s to say? I think it’s a cool idea and has some potential, but I’m confused as to what role they’ll play in the future.

With only one issue remaining, the Alec Holland revelation hurts the series. For the series to focus on these returning characters and to then have them rendered to secondary status leads me to believe that DC has looted and plundered our wallets for the last year. I will concede however that with one issue left there is still room for Johns and Tomasi to finish this story and tie everything together, salvaging what at this point has become the only Geoff Johns helmed book I’ve ever been disappointed with. This issue in particular reminds me of the “darker” periods of this series, and left me with more questions about the story’s direction than anything.

See you in two weeks, and feel free to leave your comments about Alec Holland as “earth’s ultimate saviour.”