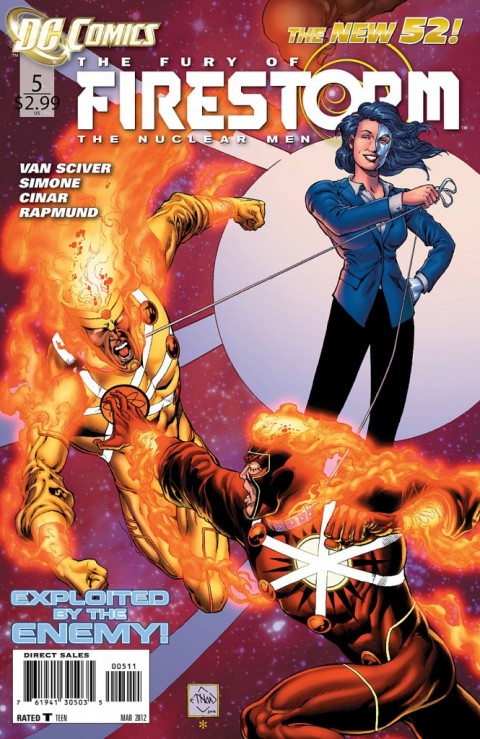 When DC relaunched its line of comic books in Sept. 2011, a plethora of characters previously without titles were given new life with books of their own. Many of the principal characters featured in Brightest Day have been featured, notably as identical or slightly intensified versions of themselves. In the case of the Firestorm title, the writers have had to tackle the issue of including both Jason Rusch and Ronnie Raymond as the main characters in the book. The effort is additionally problematic considering the fickleness of the Firestorm fan base. This week CBD takes a look at the fifth issue of The Fury of Firestorm.

Ronnie Raymond and Jason Rusch are two high school students; Raymond is a typical student athlete while Rusch is the bookworm. While at school, a terrorist cell attacks Ronnie and Jason’s classmates, goading Jason to produce a vial containing what Professor Stein called the “god particle”, promptly turning the two into Firestorm. After a brief fight between them, they accidentally merge into a hulking version of Firestorm called Fury. Shortly after the event, it’s learned other states across the globe have in their possession similar serums which allow them to produce their own Nuclear Men, creating a new Cold War style nuclear arms race as other countries rush to get their own Firestorm.

Deep in the heart of Siberia, near what was previously a prison camp, Inspector Filippov arrives to assess the Firestorm program run by Professor Arkadin. Wishing to articulate his disagreement with the Politburo’s decision to shut down his initiative, Arkadin, from a safe distance, requests that his men release the “Rogue Protocol.” Deemed a threat to everyone on the continent due to his psychological instability, he’s considered to be a prime example of the Firestorm program’s imperfection if short cuts are taken with the subjects. Without hesitation, Arkadin transforms himself into Pozhar, his version of the Firestorm protocol. He quickly dispatches the rogue while highlighting the realities facing civilization, where these individuals can march into any city and destroy it with little effort. With the rogue threat neaturalized, Arkadin asks the Inspector whether he would like to discuss further funding for his program. In the United States, Jason wakes up from a nightmare to find himself inside the Zithertech complex deep in the Nevada desert. Under the watchful eye of Director Zither and her assistant, Jason finds a note and some flowers in his room, just as Zithertech security arrives to escort him to lunch. Reacting poorly to his mistreatment by the security team, Jason transforms into Firestorm and turns their guns into broomsticks, later lowering himself to physically punching some of them before his father arrives. Jason and his dad walk from the Zithertech facility to their new home, where Allan Rusch presents his confused son with the keys to a new pick-up truck. As they tour the house, Director Zither and her assistant reveal themselves along with Ronnie who uncharacteristically asks Jason to come outside and toss a football back and forth. Unsure of what to do, Ronnie offers a truce in the form of entrusting Jason to decide what route they should taken in handling Zithertech’s request. Resolving to play along with the company for the time being, the two Firestorms fly off to Walton Mills Arena where a rogue Firestorm plans to hold a stadium full of concert goers hostage. Ronnie and Jason arrive and ward off the rogue’s guards before focusing their attentions on him. It’s too late though, as the rogue detonates himself and kills everyone at the arena, while Jason and Ronnie can only watch in horror.

Issue five of the new Firestorm series peeled back the layers of Simone and Van Sciver’s story, revealing a darker underbelly of what is in store for Ronnie and Jason going forward. The issue formally introduced Directer Zither as a centerpiece of the story and allowed us to further glean her plans for the Firestorm protocols, although her character is very much reminiscent of Amanda Waller in regard to her shadiness and is hardly an original character altogether. As the cover of the issue demonstrates, she is the individual pulling the strings of Jason and Ronnie, turning them into weapons of mass devastation for the U.S. government. The difference being, as was also shown in the beginning of the issue, is that it’s clear some Firestorm programs are not done correctly, while in the case of Professor Arkadin, the dichotomy between official, fully financed programs and the rogue programs is clear funding such that the platform can develop it to its potential without cutting corners. This “recruitment drive” issue continued nuclear scaled proliferation and the expansion/availability of the Firestorm protocols, creating a new arms race on the international stage whereby states compete, similarly as they would for nuclear technology, for their own Firestorm. The issue, more than the previous four, feels like a dual commentary on the stockpiling of nuclear arms in contemporary society, while also highlighting the terrorist mentality as demonstrated in the issue’s closing. The issue is hardly apolitical, leaping almost blindly into the volatile discussion of terrorism and military arms, and more, the authority to engage specific action where the situation calls for it. Stepping away from the underlying politics of the issue, The Fury of Firestorm #5 was a fun issue which hit the funnier hallmarks of the character such as creating balloons or turning security’s guns into brooms. While not the best book on the shelves, it’s enjoyable for what it is despite being a little heavy handed on the political side.

While the story is spotty, the artwork has been consistently good throughout the run. This issue was no exception from the front cover, drawn by Van Sciver, to the interior artwork by Cinar. Perhaps the most enjoyable dynamic of the art is its inconsistent panel arrangement on each page. No two pages feel identical to the other, creating an interesting experience with each turn. The opening fight between Pozhar and the rogue Firestorm was nicely pencilled, while Buccellato turned in some fantastic work, differentiating the colours of the different Firestorms with corresponding powers. Following those pages, we found Jason waking up from a dream, where the borderless panel is split in the middle, creating the source of Jason’s nightmare in the Fury, while the second half of the panel displays his waking from the dream in a cold sweat. I like how the Fury bleeds right into the back of Jason’s head. I really loved Scott Clark’s work on Firestorm during Brightest Day, and this panel reminds me of that series’ offering. The book’s art is also not without its contrasting presentation. In the pages featuring Jason and the Zithertech security team, there’s one small panel depicting Rusch smirking to himself before transforming into Firestorm and touching down after a fiery explosion in an adjacent succession of panels. Cinar, Rapmund and Buccellato provided some great visuals from beginning to end, in what was the high point of the issue.

After five issues, The Fury of Firestorm doesn’t really feel like it’s found its identity yet. That’s to be expected though, as of the relaunched titles it’s this character whose history and background have undergone the most dramatic alterations spiraling out of Flashpoint. In an attempt to evidently appease both Jason and Ronnie fans, the pair have created a micro-universe whereby both unto themselves are Firestorm and can function separately from the other unlike during Brightest Day. It’s perhaps the best route to have taken, especially considering the relative lack of popularity of Firestorm as a whole. With that in mind, the liberties Van Sciver and Simone have taken with this book are sensible, and although I was unsure of the book’s dynamic after the first issue, the idea has grown on me. In addition, in an effort to expand the lackluster rogues gallery, Simone and Van Sciver have combined the premise of Firestorm with a worldwide scope, creating an environment where proliferation of states and their arms programs are front-and-centre. Creating these rogue experiments is smart because it gives Firestorm something the comics have lacked, and that’s a true antagonism. Where I begin to have trouble with the book is that the title feels overly politicized in how it’s written, combined with the terrorist element of the illegitimate programs. Moreover, with the United States having two Firestorms, as well as the apparent state sponsorship offered by Zithertech, The Fury of Firestorm feels like its commentary inadvertently states the U.S. should have more big guns than their rivals, and I’m not sure that’s necessarily a good message to have hidden within the confines of a comic book. Regardless, politics aside, the book is fun and enjoyable, but I’m not sure how much staying power it will have, much less the extent Simone’s departure will impact the title.