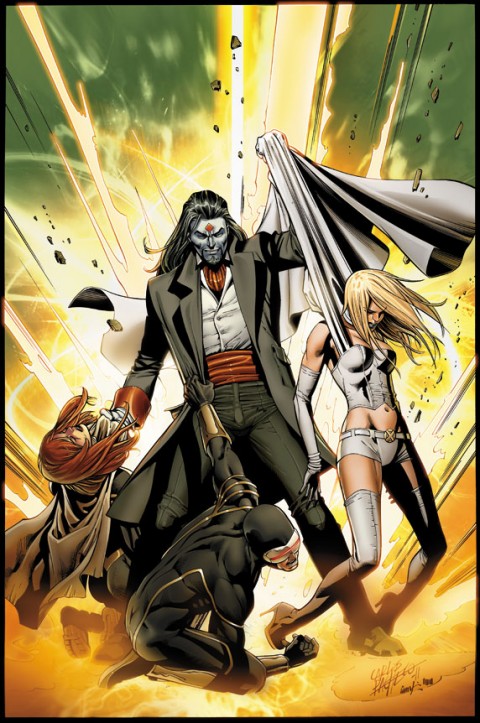 Much like Wolverine and the X-Men, the second issue of  Uncanny followed its opposite last week, arriving in the hands of fans looking for the continuation of this piece of the Regenesis saga.

With the X-Men split into two camps, Cyclops and Wolverine lead two very different teams of X-Men headquartered in San Francisco and Westchester respectively. While Wolverine reopened the school in Westchester, Cyclops remained on Utopia with mutantkind’s established figures to continue their fight for survival in a world that hates and fears them.

With Hope hanging back as the team’s resident sniper, the rest of the team continues their attempt to fight off Mr. Sinister’s armada of sinister fellows. As they fight, Agent Brand informs Cyclops that the other celestial entities have sensed the disturbance of their brethren and are en route to earth to come to its aid. Shortly thereafter, one of Sinister’s minions invites the X-Men to meet with his master. As their telepathic expert, Emma Frost preps the team for any threats Sinister poses to them, while encouraging Colossus to wear his “delightful little hat.” The team makes their way inward, where they find Sinister high up on a throne with his minions standing guard around him as his personal perimeter. After briefly recounting his scientific experiments as he searched for the perfect super-human specimen, we discover Sinister’s meet was very much designed to gloat, noting how he used the DNA of Scott and Jean to create his superhuman species. He quickly takes control of the X-Men and forces Cyclops to blast off Colossus’ helmet, leaving them to Sinister’s whims. As his forces gain the advantage, Emma uses a suggestive message to force Hope to absorb her own diamond form power, taking Magick’s power as well to teleport her away, affording the opportunity to use her sniper rifle to put a bullet in Sinister’s head. His consciousness quickly moves to another body, which is quickly killed by Colossus, before again moving to another body.

It would seem Sinister’s return as an X-Men antagonist is a little more developed than first thought. This story finds the Sinister one at the height of his villainy, disturbing an intergalactic dreaming celestial by taking its head, and creating an entire army of potential Sinisters such that even if killed his consciousness moves to another body. I like how Gillen explained the depth of Sinister’s experiments throughout his lifespan, perhaps even illuminating how he’s been able to survive as long as he has. The writing was well-paced and the book’s dialogue nicely fit with each character and their personalities. Gillen’s Uncanny is very much the “business as usual” X-Men unlike Jason Aaron’s title. I found myself chuckling at many of Emma Frost’s comments, nodding approvingly with each order Cyclops provided, even became a little lost for words with how simple it was for Cyclops to order Colossus to kill Sinister, and how easily he followed. It’s also nice to see Hope acting more like Cable than using her powers as a fail safe. I like the direction Gillen is taking this book, which although certainly contrasting with the black-and-white dispositions of past X-Men stories, takes mutantkind into a moral grey area reflective of the times they face. This is of course the crux of the current debate among fans and creators surrounding Regenesis.

The latest issue of Uncanny featured multiple artists, notably Pacheco who returns after issue one to provide another fantastic issue. The artwork is broken up somewhat at about the middle of the book as we’re treated to an interesting flashback of Mr. Sinister’s featuring the earliest examples of his genetic research. The main artwork featuring the pencils of Pacheco is quite nicely done, although there were instances where I feel like the detail suffered a bit in certain panels, such as the larger landscape shot of Sinister’s headquarters. I’d also have to admit that part of what the first issue’s artwork so good is absent in this issue, as much of it is simply a series of talking heads emoting in response, albeit quite well, to the story’s developments. That isn’t to say there aren’t notable instances where Pacheco’s pencils come together with the book’s colourist to complete a great piece, such as the entire sequence where Hope is teleported away and subsequently kills Sinister with her sniper rifle. Colossus’ handywork is also of note in an issue ripe with controlled brutality as Cyclops takes his team further down the rabbit hole.

Although still better than Wolverine and the X-Men, this issue of Uncanny is a step down from the the first issue. The artwork, although good, wasn’t as strong as before, while the story did very little beyond pushing Sinister’s agenda forward while painting Scott’s team as one which readily kills its antagonists if they pose a threat. The dialogue between the characters was very strong, functioning more as a narrative to the greater plot than really advancing it. This is still one of the better books coming out of Regenesis, but I can’t help but look at this second issue as anything except an “off issue”.