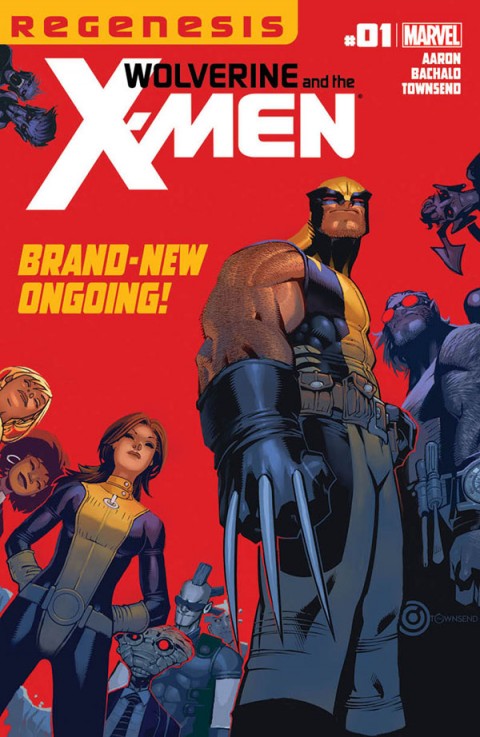 The X-Men’s re-genesis is upon us, and one of the first titles of the new X-Men era features one of the more popular mutants in the X-universe, Wolverine, moving many former Utopians back across the United States to Westchester to re-open “the school.” Read on to find out more about the first day of classes for Wolverine and his X-Men.

The X-Men have fractured, split into two factions along ideological lines. With Cyclops remaining on Utopia with many of mutantkind’s heavy hitters, Wolverine now leads the next generation into the unknown as the new headmaster at the Jean Grey School for Higher Learning.

Inside the halls of the rebuilt mansion at 1407 Graymalkin Lane in Westchester, Wolverine and Professor Xavier tour the grounds as the latter lectures the former about the difficulties of running a school for mutants. Despite his residual apprehensions and uncertainty about what he’s gotten himself into, he joins Kitty the next day as Headmaster and Headmistress as they greet representatives from the Department of Education for a final tour of the school before they can be certified.   Yet, as they travel from room to room, things go from bad to worse with Beast even unable to smooth things over for the department representatives. If that weren’t enough, Wolverine comes face-to-face with the child responsible for the X-Men’s split: the new leader of the Hellfire Club, Kade Kilgore. After reassuring Wolverine he intended to destroy everything he built, the entire school is enveloped and attacked by a large, stone-like creature.

The first issue’s story was a bit of a let down. It walks us through the final preparations before the new school is in full operation and is subsequently halted both legally and in actuality as the younger leader of the Hellfire Club, Kade Kilgore, launches another attack on the X-Men. Although Aaron’s writing is rather well paced and evenly tells the story successfully, the content itself is rather light. There’s very little in this issue that was surprising or interesting, although the irony in Wolverine building a school for young mutants, only to then be attacked by a child is ever present and not lost in the slightest. The book as a whole, however, feels very watered down and targeted towards a younger audience, evident both in the dialogue and tone of Aaron’s story.

There was not a page within this book where I enjoyed the artwork. Bachalo’s style is too cartoonish and over-the-top, in many respects creating characters with huge gaping mouths and over-sized body parts, most commonly with Wolverine. I dislike how he draws his characters in this issue, as many look weirdly misshapen and unrealistic to the point it’s distracting. At the same time, he excels in creating highly detailed landscapes, notably the final pages where the mansion begins its first bout with destruction. Much like the story, I feel like the artwork could have been much better than what was offered.

This was a very dull first issue, which is not a good sign for the series. The story felt too relaxed, while Aaron’s inherent love for the Wolverine character is on full display as he puts Wolverine in positions and situations we would not otherwise see him in, and it feels awkward. The art and story work well together, but both fall flat and together create a rather disappointing  first issue. With all the hype surrounding these post-Schism books, Wolverine and the X-Men couldn’t have sputtered any worse. The issue felt a little too light-hearted and Aaron didn’t focus as much on the gravity of the move as he should have, which considering how important it is to any X-Men story moving forward, it’s a fairly large omission.