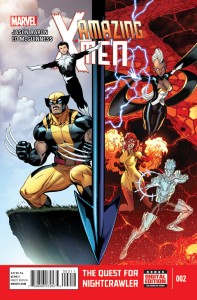 Can I start you off with something to drink? Can I see some ID? College students! Cool.

It’s interesting that you’ve shown interest in AMAZING X-MEN #2. This entree is a lot different than what you’re used to.

Believe it or not, there was a day, long, long ago when the X-Men didn’t stand around feeling all oppressed and hated and stuff. Back then, the Marvel Mutants didn’t fight and kill each other because they disagreed on how to fight that oppression. There was a lot less brooding (the feeling-sorry-for-yourself kind, not the being-taken-over-and-transformed-into-a-bug-thing kind.)

In those good old days they actually fought bad guys, and had adventures, and smiled every once in a while. They even spent time playing the occasional softball game. They don’t have time for softball now, what with all the mass genocide and eviscerating one another with scythes and claws.

That’s why I am so crazy about AMAZING X-MEN #2.

Remember that first time you went home on Thanksgiving break and stayed in your old room? All the memories, all the fun you had in that room all came rushing back to you. You felt…safe and happy?

That’s what you get with AMAZING X-MEN.

This is Old School X-Men, fitting, since it reminds you so much of the X-Men when they were in their Old School. It feels like GIANT-SIZE X-MEN #1. You know, the one with these great-looking new characters like STORM, COLOSSUS, and NIGHTCRAWLER busting through the cover. It is one of the greatest covers EVER, by Gil Kane and Dave Cockrum and has been ripped off –ohh, let’s conservatively say– a BAJILLION times now. 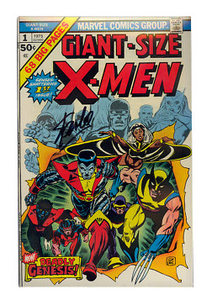 Len Wein’s story lived up to the incredible interior art, too. We recognized the characters we already knew, not just because they looked familiar, but because their dialogue, their CHARACTER was recognizable. We were also introduced to the new characters quickly and effectively, with scenes that gave us just enough information to leave us intrigued.

Don’t ever tell JASON AARON and ED MCGUINNESS that I said this, (don’t wanna give ‘em the Big head) but the job they are doing in AMAZING X-MEN is right up there with WEIN and COCKRUM.

The action scenes are remarkable, with heroes using their skills in ways you never saw before. The plot is tight, and fast, but with twists and turns that make every page a blast. Aaron writes scintillating dialogue and knows how, and when,  to use humor. His pacing is some of the best in comics, intuitively slowing things down when needed (but never for very long) and going from Zero To 60-thousand in a millisecond when the action resumes.  I found myself repeatedly  having to FORCE myself to slow the hell down. 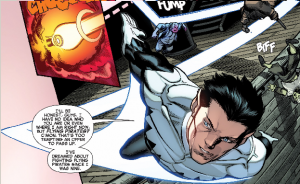 McGuinness (inked by DEXTER VINES, colored by MARTE GRACIA) is SO clean with his lines, so inventive with his angles, so impressive with his character visualization, you can’t look away. I already want a spin-off series with CAPTAIN JACK and CAPTAIN BILLY THE KID. (Someone’s been listening to their old Billy Joel’s PIANO MAN album.)

Have I mentioned the best ingredient in this dish? 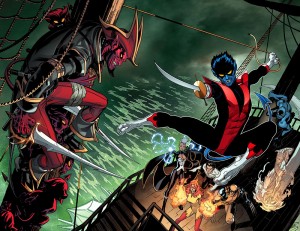 Okay, maybe I should have stayed away from that particular analogy, unless you’re that weird guy that eats bugs on the Travel Channel.

Kurt Wagner is back, buckling his swash and bamfing his ass all over the place. The real Nightcrawler.

And let’s give huge culinary props to NICK LOWE. This is a hell of a dish you cooked up here, Mister Editor.

One more thought: I don’t want to give anything away, but, Nina Snodgrass back in Carson City, Nevada? You owe me a date to the drive-in because in AMAZING X-MEN #2, Hell DOES freeze over!

I give this my highest recommendation yet: FIVE PORTERHOUSE STEAKS