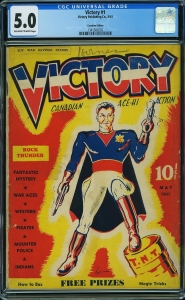 In the comments section, Whites collector Steven Lipson proudly shared with us his pick up, the Victory pulp that I completely ignored. Stephen’s knowledge of the era and savvy at the game ensured he picked up this diamond in the ruff. It was a comment from another reader that caught my attention, he claimed the Victory pulp was the “buy of the auction”. I had to find out more.

Stephen was kind enough to do a little write up for me about his pick up, enjoy.

In May 1941 an obscure pulp was published in Toronto by Victory Publishing. On its cover is a rather crude rendering of an unknown Canadian costumed superhero named Rock Thunder by none other than Ted Steele. Ted was a prolific artist in the Bell Features publishing stable in Toronto during the war years. He contributed such characters such as Speed Savage (the White Mask) for Triumph Comics.

Rock Thunder thus currently remains an enigma. However some information has come to light regarding this elusive book and I would suggest that albeit a pulp, it is significantly historic in the realm of Canadian Golden Age pop culture for a few reasons:

Notice the Canadian Ace Hi Action in the title and compare that with the 1945 Speed Savage One-Shot where it states Canadian Ace of Action underneath the title.

The book screams Canadian, right down to the Maple Leaf on Rock Thunder’s Chest. The costume with the boots, gloves, and the two guns are similar to that of the later costume donned by Speed Savage. The title is emblazoned with the colors of the Union Jack, that was contemporaneously Great Britain’s flag. Remember, Canada was a British commonwealth nation in 1941.

The tome is both fascinating and uber-rare, with only one other known copy in existence in a private collection. Victory is an esoteric book that is now only coming to light as a hidden gem in the arena of the Canadian Golden age of comics.