I don’t know if you’ve seen this elsewhere yet, but this article really struck a chord with me.  Reuters had a story about Herbert Chavez, a Filipino designer who is a huge Superman fan.  He’s had body modifying surgery to make himself look more like his idol, Superman. 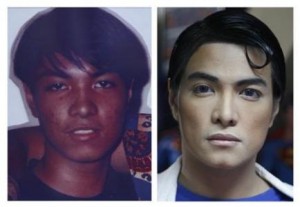 Many of us comic fans like to show our adoration for our favourite characters many ways.  There are many ways to achieve this.  You could wear a t-shirt or hoodie with your favourite Superhero logo on it.  You could wear a belt buckle with the logo as well… hmm… actually those are a couple of examples of what I do.  I have lots of t-shirts and cool buckles.  But having plastic surgery to look like Superman is a little extreme. 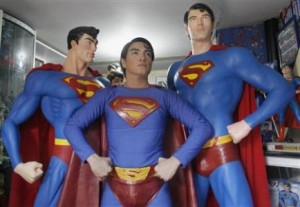 Mr. Chavez’s surgery is an extreme way to look like Superman, but there are other permanent steps to show you are a fan of something.  Tattoos are another permanent way to display your favourite superhero logo or character.  How many Superman logos are tattooed every day in parlours around the country?  Well… maybe not everyday, but I think it may be one of the more popular Superhero tattoos out there.

Many fans dress up in cosplay as well.  You’ve seen them at FanExpo.  Some costumes are elaborate and highly detailed, and some… are thrown together the night before.  While some fans are very passionate about cosplay, other fans think this is an extreme version of fandom (but they will be there with their cameras taking pictures of every Wonder Woman they see).  I think that cosplay is cool.  I respect the amount of time and work that goes into a costume. I’ve been working on a Captain America costume for Halloween, and since I can sew worth a darn I understand how much work goes into a costume.

So my question to you is, how far would you go as a comic book fan?  Is dressing up as Superman too extreme for you?  Or are you standing in-line right now to get surgery just like Mr. Chavez? 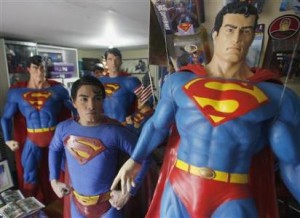