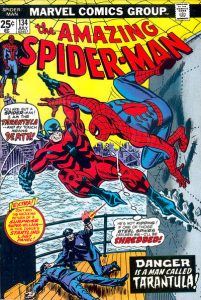 We’ve had some heavy hitters up the last 5 or 6 weeks so I think we’ll take it easy on the pocketbook this week and pick a cool, fun book that’s affordable. Cool, fun and affordable but at the same time Undervalued!

This week I shine the Undervalued Spotlight on Amazing Spider-Man #134.

Amazing Spider-Man #134 features the 1st appearance of the Tarantula! Creator Gerry Conway said that he wrote the Tarantula as a national hero of a Latin American country. Conway lamented that smaller countries did not have noted costumed heroes like USA’s Captain America. It came in due time, Jerry. Hey speaking of which, on a recent podcast I asked – if the Tarantula is a Tarantula then what kind of Spider is Spider-Man?

I don’t think there is a better villain introduction until the Black Cat in Amazing Spider-Man #194. The Romita cover is striking and stands as one of the better Spidey covers of the era. There were a lot of great covers in Spidey’s Bronze Age and this was one of them.

I’m not sure why this book never took off in value, I mean the 1st appearance of a Spidey villain, embedded in the most collected era of the most collected title in fandom. I’m going to somehow try to blame Spectacular Spider-Man #1 with its famous Tarantula cover. Spectacular #1 has never received any love from the markets and maybe Amazing Spider-Man #134 is guilty by association?

Did I mention the book has wallowed for decades as an also-ran issue? There is a bit of movement now but there’s still plenty of time to pick up nice tight copies on the cheap.

Amazing Spider-Man #134 checks off a lot of the “what drives value in a comic” checklist.

For some really dumb reason, I like the fact that it rests chronologically right in the middle of the Amazing Spider-Man #129 (2/74) and Incredible Hulk #181 (11/74). That’s right, the way I’ve lined this conclusion up those two Bronze Age titans can only serve as the bread to the meat that is Amazing Spider-Man #134!!

Oh, did I mention I really like the Ross Andru pencils in this book?