The publisher that seems to get the least amount of love from collectors of war-time Canadian comics is Montréal-based Educational Projects. It was the last of the big publishers to come onto the scene and its comics were qualitatively different from those put out by its competitors.

While Vancouver’s Maple Leaf Publications and Toronto’s Anglo-American, Hillborough Studio, and Commercial Signs/Bell Features chose to have as their mainstay fictional champions whose dramas were spun out of conflicts with crime and the Axis, Educational Projects flipped that around and concentrated on presenting the stories of non-fictional, real-life Canadian individuals. Educational Projects produced comics intended, above all, to edify and educate its readers, and hoped that this would engage and entertain them.

The company was founded by Montréal-born Harry Joseph Halperin. Harry was born on December 27, 1909 to Hyman Halperin and his wife Edith (née Segal). He had two younger brothers, Daniel (b. 1911), who became a prominent Montréal ear, nose and throat surgeon, and Sam (b. 1913), who became a lingerie designer and settled in Los Angeles in 1946. The family was Jewish and had roots in Eastern Europe–in that area of fluid border between Russia and Poland, where current borders weren’t settled until after the Great War and, even then, it took another world war to make them final. On May 23rd 1937, Harry married Rose Arfin, a social services worker, and, on the documentation, Harry listed himself as an “educational director.” Both Harry and Rose became heavily involved in the Montréal Jewish community.

Canadian comics had already been in circulation for over a year when Harry decided to jump on the bandwagon. He purposefully timed the release of the first issue of Canadian Heroes Comics to come out just after kids had returned to school from their summer holidays in 1942. The cover date of the first issue was October, 1942 but it was probably on the stands in mid-September.

There were no costumed super heroes, no detectives, no cowboys, nor spacemen on the cover. Front and center was Alexander Cambridge, the 1st Earl of Athlone and the Governor General of Canada at the time. His portrait was flanked by two knighted Canadians, Sir John A. Macdonald, Canada’s first Prime Minister and Sir William Osler, one of the founding fathers of modern medicine. Other figures blocked out on the cover are a Canadian soldier disembarking at Dieppe with tommy gun blazing, a Canadian battleship, a Mountie, and Montréal hockey legend Howie Morentz. All in all, a pretty untypical comic book cover constellation for the times, though American publisher Parents’ Magazine Press with titles such as True Comics and Real Heroes had been doing the same type of thing below the border for a year before Canadian Heroes Comics appeared (note that because of their deemed educational value, those two American titles were two of the few that were allowed through the ‘Comic Iron Curtain’ imposed by our government’s WECA restrictions at the time).

Harry Halperin’s vision for Canadian Heroes Comics is given in an editorial on the inside back cover of that first issue.

He makes a declaration of the Canadian-ness of the book much in the same way that Vernon Miller did in the first issue of Better Comics and as Adrian Dingle did in the first issue of Triumph-Adventure Comics. Halperin says: “It may truly be said that this is a magazine of Canadians, by Canadians, and for Canadians. From paper to printer, from author to artist, for cover to cover, it is thoroughly Canadian.” He also goes on to explain that: “The title ‘hero’ does not belong only to the soldier on the battlefield, the sailor on the seas, or the airforceman [sic] in the skies. Every boy and girl can become a hero, but he or she must prepare himself or herself for the moment when the opportunity presents itself; this may come in some ordinary work in the class room; unexpectedly on the playing field, or during regular activities in the club room; it may be in your home front efforts on behalf of the salvage committee or war savings stamps or Junior Red Cross work.”

The title of the comic itself, therefore, had a double meaning.  It was meant, of course, to refer to Canadian heroes throughout society, history, and sport including, especially the armed force members battling in Europe and in the Pacific. However, it had the added implication that the Canadian kids reading the comic could serve as home front heroes and that they should prepare and groom themselves to become future Canadian heroes as adults (and how they should conduct themselves to do this can be seen from the graphic that filled the back cover.)

The inside front cover of this first issue of Canadian Heroes posted a letter from the Minister of National War Services, Joseph Thorarinn Thorson, pointing out how Canadian kids could help the war effort. Ironically, Thorson was succeeded by Richer Laflèche while the first issue was still on the stands, and Laflèche, himself, was the central cover feature for the fourth issue of the title. Halperin actually wrote a letter to Laflèche after that issue came out and perhaps Halperin was of a habit to do this to solicit letters from Canadian ministers.

Canadian Heroes was also meant to provide its young readers with news of the war, and this first issue had a “Flash!” banner just above the masthead that read: “Canadians Lead Smashing Dieppe Raid!” This was amazingly current because the Dieppe Raid had taken place on August 19, 1942, just about a month or so before the comic appeared on the stands. Understandably, the account of the raid in the comic proved to be more propaganda than accurate reporting. Today the Dieppe Raid is regarded as a disastrous effort and the single bloodiest day of the war for Canadian troops.

The template for Canadian Heroes comics was set with this first issue, and the title deviated from it only in the smallest of ways in its 30-issue run. From cover to cover, each issue was filled with informative, patriotic, edifying, and engaging material that parents might actually buy for their kids, and that schoolteachers might even stock on classroom reading shelves.

Its ‘go-to’ artists were Sid Barron, Joseph Hillenbrand, and Art Director George Menendez Rae. Barron, one of Canada’s most successful editorial cartoonists of the latter half of the twentieth century, created Bos’n Bill to connect kids to Canada’s navy and Ace Deacon to inform kids about the exploits of Canada’s air force. He also came up with benign silver-haired and pipe-smoking magistrate, Judge Goodwin, who showcased various possible career options for the young readers of Canadian Heroes. Here is the splash for Judge Goodwin’s presentation of what a career in commercial art would entail. It is written by George Menendez Rae and drawn by Sid Barron. It looks like Barron has put in a sketch of Rae himself doing a cover of Canadian Heroes.

Joseph Hillenbrand worked mainly on historical biographies and was the chief artist behind the “History of Canada” series which managed to get up to the eve of Confederation before the title folded. He also created the speculative, futurist series called “World of Tomorrow” hosted by ‘Tomi’ girl from the future.

George Menendez Rae was an accomplished fine artist and, to my mind, among the very best of Canadian comic book artists from this era. He seemed to do most of the covers, though he seldom signed them. He is most remembered for creating, in the fifth issue of the title, the fictional champion of Canadian justice and fair play, Canada Jack and the offshoot Canada Jack Club which connected kids from all across the country in a united home front war effort. However, his best work was in his long-running series recounting stories from the case files of the RCMP.

Harry Halperin even got himself and his family involved in the enterprise. He penned editorials almost every issue, some of the features signing with his monogram “H. J. H,” and I have the abiding suspicion that it was he who was behind the pen name “The Author” that claimed every installment of the “History of Canada” series. Harry’s wife, Rose, reviewed and recommended books for kids to read on her “Books You’ll Like” page, occasionally assisted by Harry’s brother and surgeon, David. She also wrote a comparable page devoted to recommended pieces of music called “The Music Nook.” David also wrote the Judge Goodwin career segments on Medicine (Canadian Heroes V2 n5) and Chemistry (Canadian Heroes V3 N2). 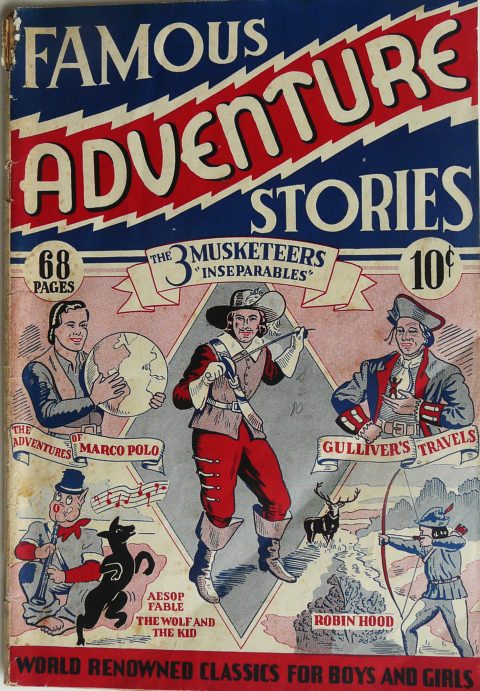 Then, in 1944, it issued a compendium of George Menendez Rae’s RCMP stories called work Action Stories of the Mounties. 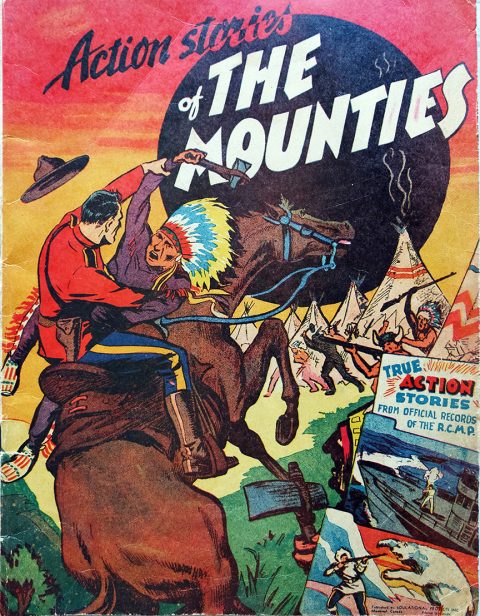 In the same year Educational Projects put out a 192-page giant-sized issue called Picture Story Annual that stapled together four remaindered issues of Canadian Heroes with a new, square-bound cover. 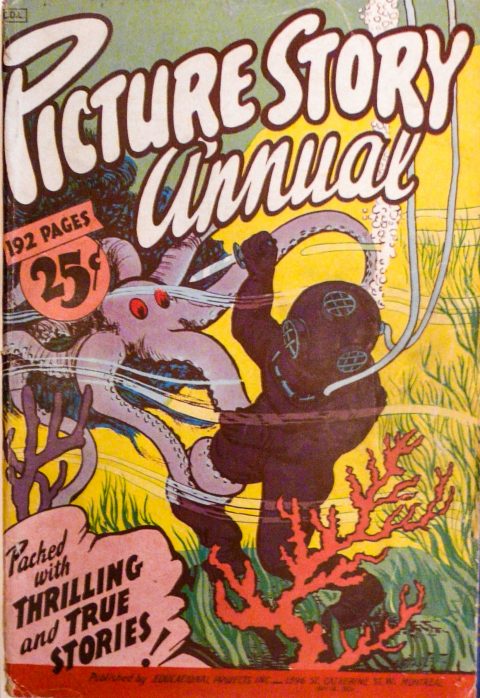 One last book that came out through Educational Projects in 1944 is a book of which I have yet to see a copy. It was a mail-order only copy of M. C. Gaines’ EC Picture Stories of the Bible Complete Old Testament Edition which had a 60 cent price tag—a price that never appeared on the American editions. 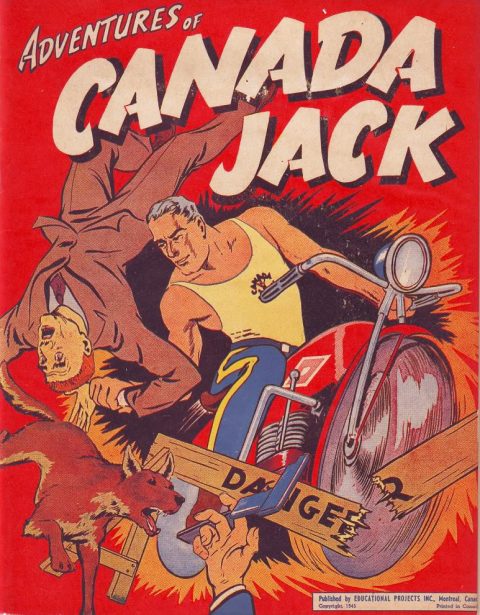 The Action Stories of the Mounties and Adventures of Canada Jack compendiums have no price marker on them, so they were most probably mail order only or used as subscription premiums. I have seen the Picture Story Annual both with the 25 cent price marker and with a blank price marker, but I don’t think it was a mail order item because I have never seen an ad for ordering it.

Educational Projects also released a number of paint books which were illustrated by their staff artists and which were based on stories from literature. 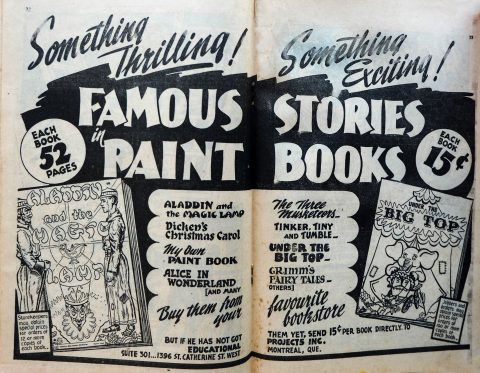 Sadly, Canadian Heroes, the title that brought Canadian Kids stories on Billy Bishop, Alexander Graham Bell, Raymond Massey, and Walter Pidgeon, as well as the exploits of Canada Jack, lasted for only three years and 30 issues. Educational Projects was the first of the big four Canadian comic book companies to fold. The last issue of the title, Vol. 5 No. 6 had a cover date of October, 1945. However, we can’t deny that Canadian Heroes was the most Canadian comic book ever and that Harry Halperin’s efforts to make it so need to be remembered.