An issue of Real Boy’s Stories No. 1 has shown up on the coming ComicLink July Focused Auction. I originally wrote about this title four and a half years ago in one of my earliest columns. At that time, it was a mystery and Jim Brigham noted in the first comment to the column that that the publisher of this item was Classic Publishing Company a subdivision of Toronto’s Gilberton Publishing which was the first non-American branch of the U.S. company that put out Classics Comics. In fact, this is just around the time that the company put out 6 Canadian editions of that Classics Comics series in Canada. This is the first copy of Real Boy’s Stories that has surfaced to my knowledge. 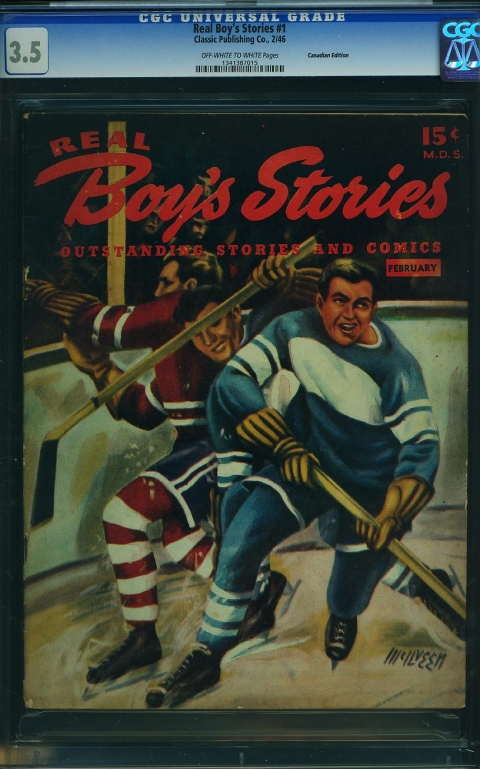 The possibility of the existence of the issue was called up by the appearance of a 15-page story titled “Jim Casey – The Atomic Man” that was serialized over a half-dozen issues of John Balgé and Dave Sim’s Kitchener-based fanzine called Comic Art News & Reviews (CANAR) which started in September 1972.

The source material for this reprinting seems to have been the original art for the story that was made available to CANAR by Capt. George Henderson and his vast Whizzbang organization.

The artist for the story used the pseudonym “VAN” and the same pseudonym appears on the splash page for a story titled “Tip Offer – The Story of a Newspaperman” in Joke Comics No. 25. It’s a pseudonym that hasn’t yet been cracked.

The connection of this Atomic Man story to Real Boy’s Stories rests upon its last panel which was reprinted in CANAR 10. Here is that last page of the story: 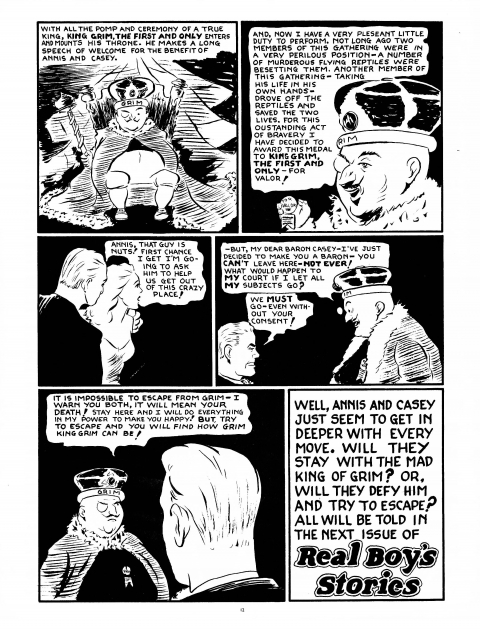 It promises the continuation of the story in the next issue of Real Boy’s Stories. Here are some selected pages from the CANAR reprints of the Atomic Man story: 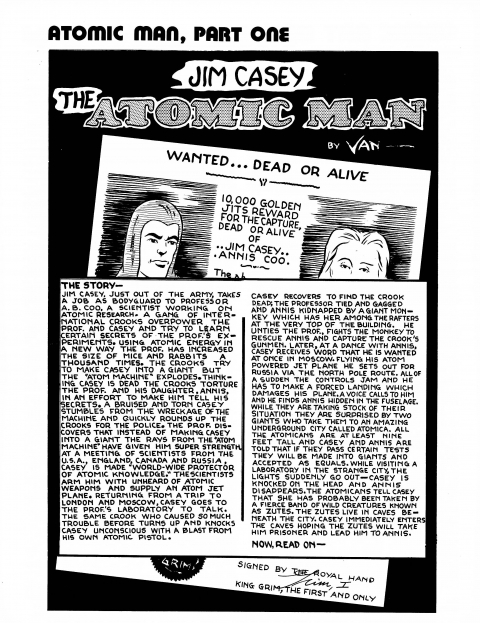 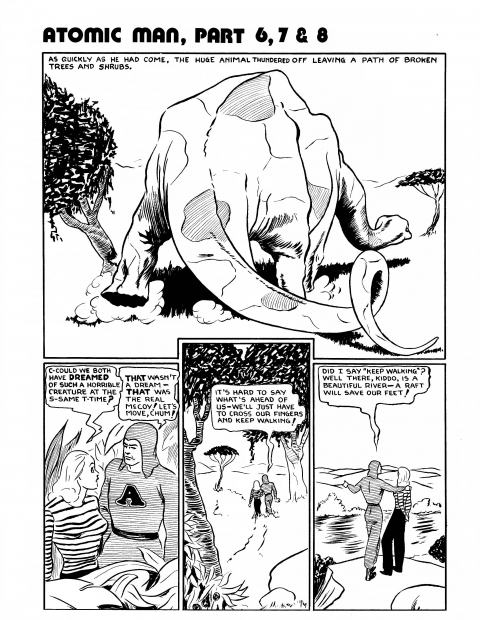 Here is Dave Sim’s cover for CANAR 7 which features The Atomic Man: 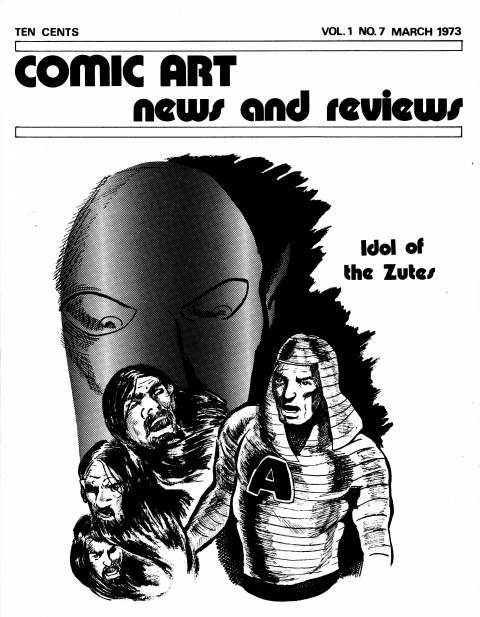 Lastly, for curiosity’s sake, here is an original drawing I found up in Ottawa in one of the boxes at the Library and Archives of Canada. It is probably a Dave Sim take on the character that was never used or very possible an original by Van, who knows? 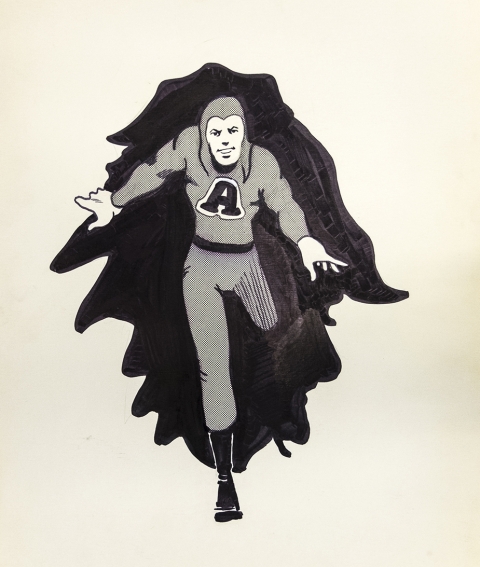 In all probability, the issue on auction contains this story that was reprinted in CANAR. Now, Jim Finlay brought up a point to me that needs to be considered. Is this, in actual fact, a pulp? That is, is this book mainly text stories with a few accompanying illustrations and a small comics section? The Victory pulp that ComicLink offered about a year ago had a CGC label that didn’t indicate that it was a pulp and maybe this is the same case here. 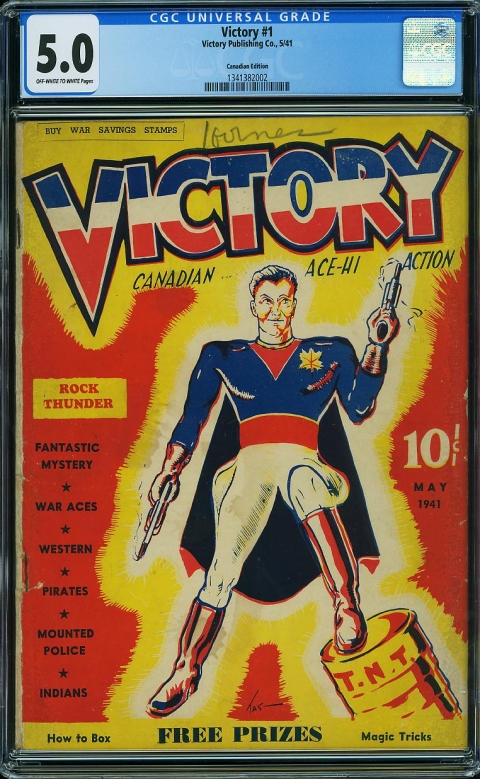 The style of painted cover appears on many pulps but never, to my knowledge, on a WECA comic. The 15-cent price tag is perhaps more appropriate for a pulp and appeared on only a handful of WECA comics (the first 8 issues of Better Comics, the first 8 issues of Wow Comics and the 6 Bell Compendiums from the summer of 1945 for some examples), so this may be a pulp with some comics stories in it as well. The subtitle of the book “Outstanding Stories and Comics” may also point to this. We also know that the cover price of the six Classics Comics that Gilberton published in Canada in 1946 was 15 cents so maybe this was a standard Gilberton price for a comic and Classic Publishing Company being a subsidiary of Gilberton might have used their standard pricing.

I hope whoever wins the book will crack it open so that we can find out one way or the other.

On Saturday, Hamilton cartoonist Dave Collier alerted me to the fact that Canada Day’s Globe and Mail contained a Margaret Atwood short story set in the world of WW II Canadian Comic book artists titled “Oursonette” (Bear Girl). The story happens on VE Day 1945 and concerns a comic book company headed by a female publisher and the company’s main product is Oursonette Comics about a female hero taking on the Axis.

Oursonette has the power to transform into a polar bear at will and has two polar bear companions that fight along side her. The upshot of the story is that the female who heads the publishing company tells her artists (who are male) that they better be able to draw washing machines and soap powder boxes rather than super heroes and Nazis now that the war is over.

If you missed the hard copy the story is online here . Try to get the hard copy because the illustration done for it by Ken Steacy is great.

Atwood seems to have a soft spot for comics and especially Canadian comics. She picked Loubert and Hirsh’s 1971 book the Great Canadian Comic Books as one of her three favourite books of 1971 in an article for the Financial Post that appeared on December 11, 1971.

Also check out Bryan K. Munn’s column from October of 2011 for more on Margaret Atwood and comics.

This Saturday I’m at the Montreal Comic Con giving a presentation on my book on the Bell Features artists and the special guest at the presentation will be original Bell Features artist Jack Tremblay who turned 91 this past May. Montreal-based Jack Tremblay’s main work for Bell concerned the adventures of Air Ace Crash Carson in Wow Comics issues 8-16. Jack also did a short run called “Wings over the Atlantic” in Commando Comics 1-3. After his short time in comic books, Jack Tremblay became a successful graphic artist and eventually a well-known fine artist. In 2014, Jack Tremblay issued a 100-run independent comic called Esthetic Comics that conveys some of his views on the artistic enterprise.

The presentation will be in Rm. 514 at the Palais de Congrès at 4pm on Saturday July 8 and after a short summary of what WECA comics are and what my book is about I’ll devote most of my presentation to Jack so that he can talk about his experiences. Jack Tremblay will also do a signing for about an hour at the ICE Exchange/Big B Booth just after the presentation. I’ll also give away a few packets of the Canadian superhero cards that were available at last Spring’s Alter Ego Exhibit at the Library and Archives of Canada. I hope those readers who will be at the Con will have a chance to drop by, here what Jack has to say and maybe ask some questions. I would be great to meet up with any and all of you.