“Which Mangas are you currently reading? If you don’t read Mangas.. why?”

I’ve had a hard time finding manga that appeals to me. I read Akira, some Lone Wolf & Cub and Mai the Psychic Girl years ago, but since then, I’ve seen very little that’s not Genericamon or High School Angst Party. 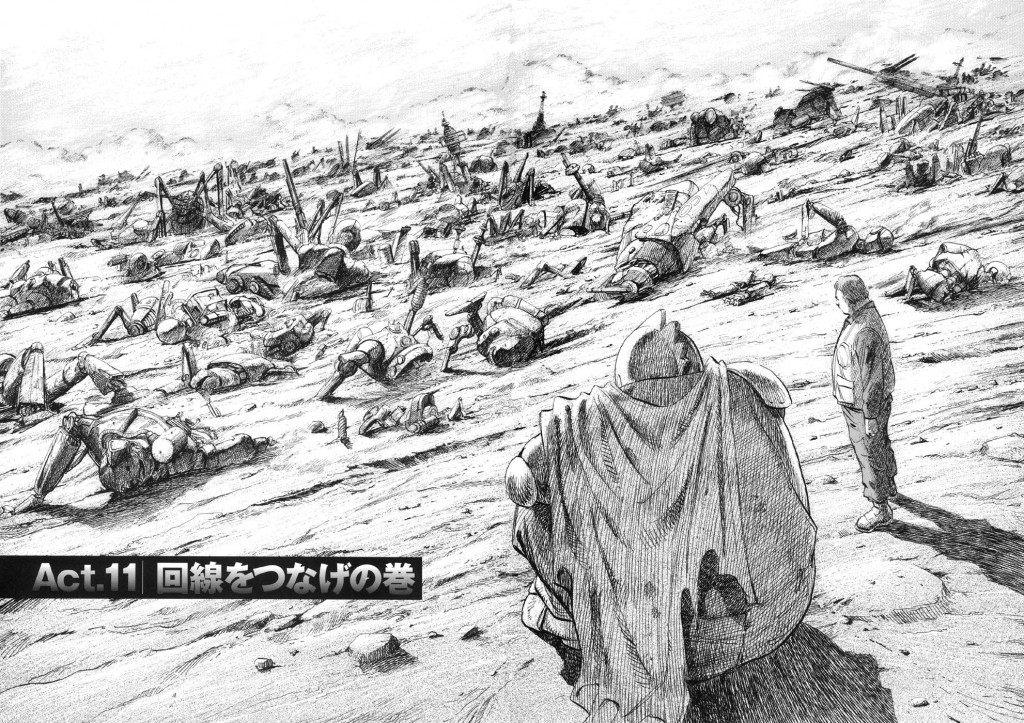 Now I haven’t been looking REALLY hard, but I do browse. I did come across Emma, the story of a Victorian maid who falls for a lord, and enjoyed it, but it seemed more an exception than a rule. But then I started following Faith Erin Hicks on Twitter and she’s really into manga. So I told her what I’d read and enjoyed and she recommended Naoki Urasawa. So off I went to the library. I’m in the middle of both Pluto and Monster and they are both great. I’m also trying our FMA because of Faith, but I’m struggling with it because of the conflict between a serious story and some rather silly art at times, which has been one of the thing I’d been avoiding about manga. But I’m giving it a chance.

Now I just need Pluto vol. 6 to come in.

I was going to read some Manga, but they I found out all they are is comic books. It’s sort of like how I heard that all that Anime stuff is really just cartoons. 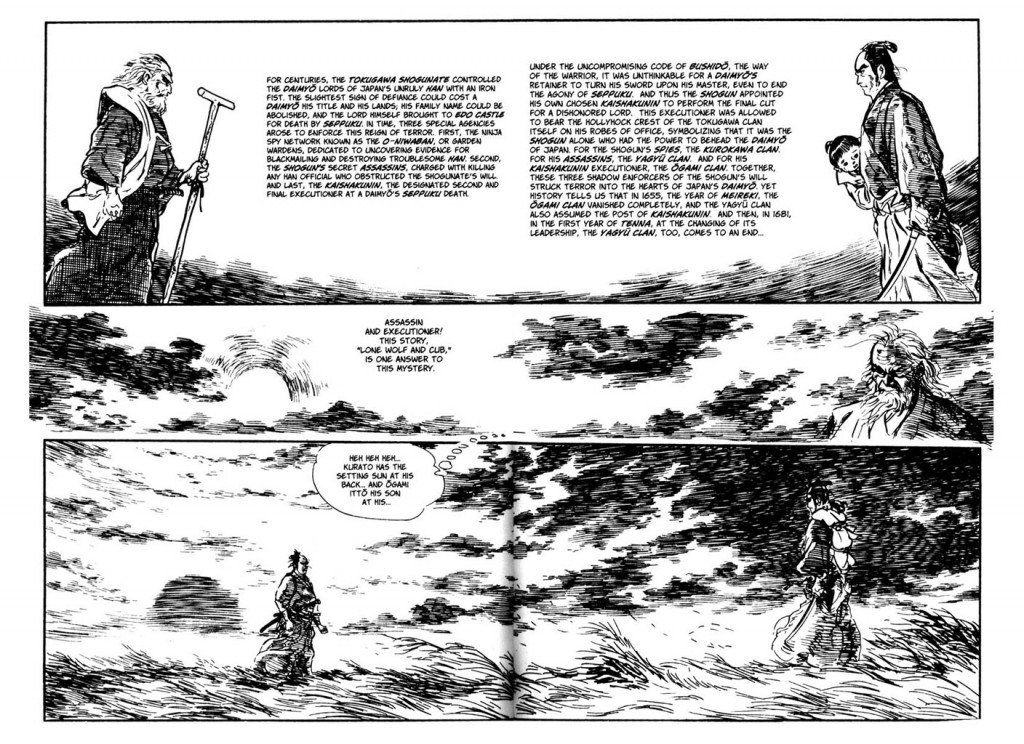 I don’t read Manga. I the only manga I have read is Lone Wolf & Cub, which I think is amazing. I don’t read manga just because there is so much out there to read, I just don’t have time to read everything. But I am always looking for suggestions for a great read.

I’m not a fan of the art style; it’s just not for me.  I tried manga in the 80s, reading Lone Wolf & Cub and Crying Freeman but it didn’t take.

I am not currently reading any Manga because I am not a 13-year-old girl. Let’s be honest, it mostly is total garbage. Oh Yuriko! I want to date you but whenever we kiss I turn into a space ship and must fight giant tentacled aliens. Now I know that some of us love tentacles…Shelly. 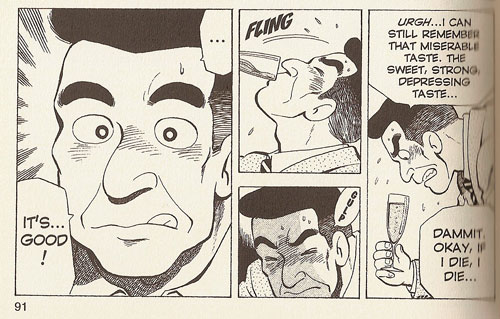 I read a ton of manga. But currently I am reading Oishinbo; a manga about Japanese cooking, Yotsuba; a slice of life comedy revolving around a naive adopted girl and the Project X series whenever I can get my hands on them. I find Anthony’s viewpoint on manga interesting. His stance on manga being total garbage almost completely mirrors the view that non-comic readers have on comic books. You could say that the majority of comics are garbage to people as well. Not all comics can be as critically acclaimed as Asterios Polyp or Watchmen and not all manga can be along the lines of Doing Time or Disappearance Diary. And in response to Scott, have you tried Vagabond by Inoue Takehiko? It’s a compelling historical samurai story with beautiful art that’s not in the typical big eyes small mouth style that you believe is typical of manga but is really mainly seen in the shonen manga. 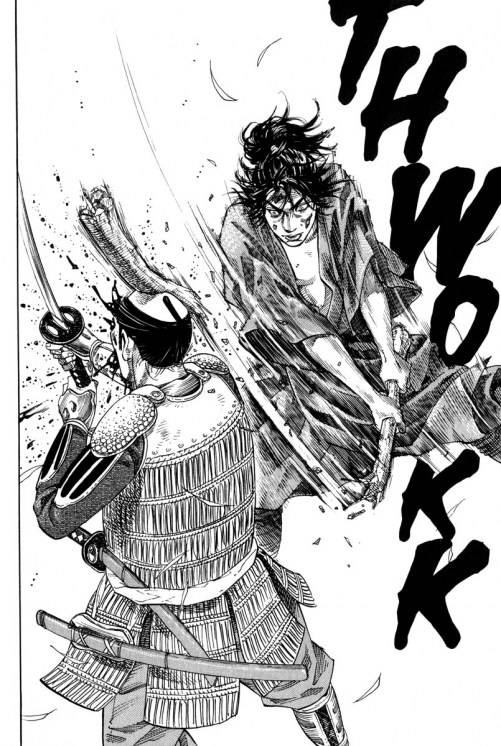 Scott: Well David it’s kind of you to tell me what I believe is typical manga but my two examples fall far outside your definition of “big eyes small mouth” shonen style.  I have checked out Vagabond and while nicely detailed still falls into a drawing style I associate with manga.  To each his own.

Some of the best stories I’ve ever read have been Manga. Monster by Naoki Urusawa remains one of the most compelling pieces of sequential storytelling I’ve ever read, same goes with his currently being distributed to North America 20th Century Boys, a book so awesome that I actually have a book club for it with a few of my customers. 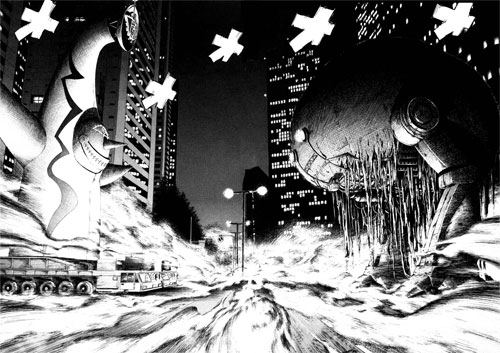 Vagabond is an amazing piece of work, but one of the best books I’ve ever read is Samurai Executioner a ten volume story by Lone Wolf & Cub‘s writer Kazuo Koike and artist Goseki Kojima that features the life of executioner and sword tester Yamada Asaemon a bit character showcased in Lone Wolf & Cub. It’s basically a series of short stories that sometimes very tangibly involve Asaemon. (Almost like how a large chunk of the best Eisner’s Spirit stories only have a couple of panels involving Denny Colt.)

The reason why I asked this question is because – as Greg pointed out – is that difference between Manga and Comic book are the same as comic books and Bande desinee…the only difference is the cultural influence.

Anthony: Mostly total garbage. I added the mostly. The problem that manga has is the problem that all genre has, that is, it needs to maintain its familiar tropes in order to be consistent with the genre and maintain its fanbase. However, this will rarely allow for the expansion of a fan base beyond regular viewers/readers. If you don’t read superhero stuff because you think it is garbage you probably hate what the genre represents: capes, hackneyed plots, bulging biceps, etc. Now I could give you the Watchmen to read and you would say “wow, that was a great superhero story” but you wouldn’t suddenly pick up a bunch of other superhero books because you don’t like the genre. It is just that you can appreciate the best from it.

I thoroughly enjoyed Lone Wolf & Cub and Samurai Executioner but they are not typical manga. Typical manga involves weird plots with robots, cats, and tentacles and has a gratuitous number of panty shots. Prove me wrong.

Now if we really want to get into it pretty much all creative work is mostly garbage. At least 51% of all movies, comic books, video games, books, and television shows are utter detritus.

Chris Howard: We also have the problem of what is easily available here in North America. I’m sure Marvel and DC are available in Japan, but are Drawn & Quarterly books? 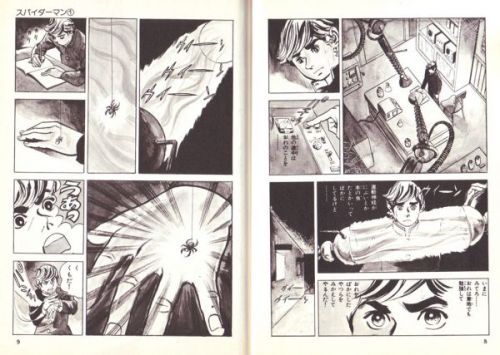 I’ll be honest and report that I have not read a lot of repackaged, translated Japanese comics. I’ve read Akira and some of Lone Wolf and Cub. I did try the Marvel repackaged Spider-Man manga, but it seemed to force in a lot of unnecessary sexual situations that weren’t in the western Spider-Man stories and seemed to be purposefully avoiding telling a traditional Spider-Man story so I was unimpressed and bored. I’m not particularly enthused about the black and white art styles used, and there’s a storytelling methodology and energy that’s very different from Western comics that I can appreciate but don’t really care for. When it comes to comics imported from outside of North America, I prefer translations of European bande dessinée. 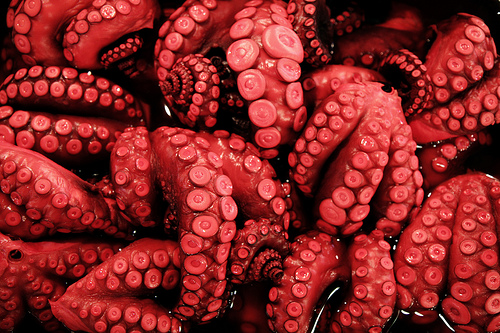 Why are tentacles and yaoi more popular here? Because that’s what sells (though I’d argue that tentacles tend to be more anime-oriented for the action shots). It is by no means the be all and end all to manga (or anime) but it’s pretty much what people have been exposed to and a lot of the reason why people tend to think that manga and anime is nothing but panties, aliens, and tentacle rape.

That’s it for this week. I’d be remiss if I didn’t mention that if you’re looking for some really good, thought-provoking manga you can’t go wrong with the works of Osamu Tezuka. He was the creator of Astro Boy, but did a whole lot more. I’d suggest checking out Ode to Kirihito and Ayako if you’re looking to see just how far ahead of the curve this man was when it came to telling mature and beautiful stories through sequential storytelling!

What else did we miss? tell us in the column below!