I’ve just returned home from a short holiday on England’s arty south coast in the attitudy town of Brighton. Brighton is packed with tattoos, dreadlocks, guitars, local bands, art-culture, galleries, motorcycles and generally all things cool and niche.  As is customary for nerds everywhere, part of my first exploration was to find a suitable comic shop. Familiar ground to hover around and satisfy my need for nerdery among friends, AKA: people like me.

After visiting a couple of semi-cool book shops and moody, underground graphic-novel-heavy stores.  I was growing increasingly sceptical of finding an actual comic shop. I was simply and blindly following Google Maps and crossing all available fingers for a soon discovery of ‘comicness’ resulting in my smiling face.

I eventually found the perfect place:  Dave’s Comics on Sydney Street. A soho-esque part of town, rightfully nestled among the guitar shacks and brick-a-bracs, flanked by tea-shops and independent galleries filled with local art. The cobbled streets hold us all in place as Dave’s Comics gives Brighton a cool little heart-beat in the midst of a mainstream, sunbeam high street. 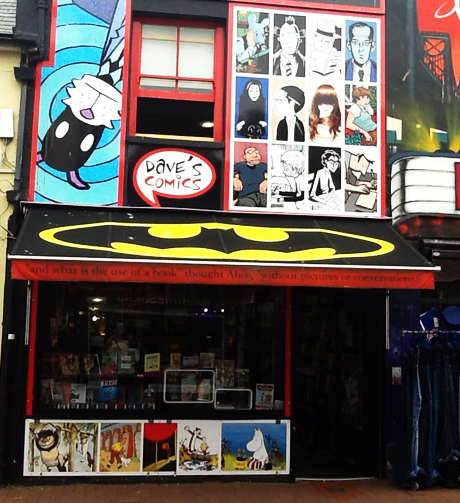 Split into 2 spaces, the first 2 ground-floor areas were packed with toys, t-shirts, costumes and merchandise and demanded my attention from the jump.   Some really cool and familiar stuff in there, perfect. Moving upstairs to the secret — and naturally lit — attic space, I discovered good stock of all the new books on a Wednesday, visible and tidy displays of other recent books too, a good selection of grovels and posters and to top it all off… a rather posh-looking couch to park your bum on, inviting you to leaf-through Wednesday’s books maybe even discussing them with the other nerds in the room. A really cool little of a comic shop to stumble upon during a wishful Wednesday. Winner. 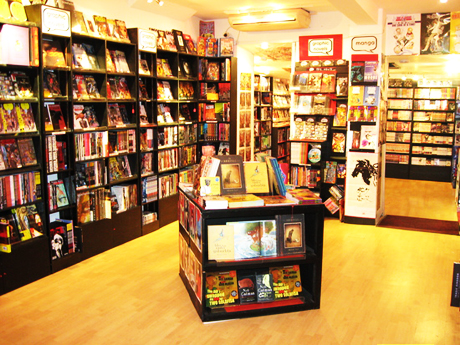 I book-marked the store in my head and will always return if I’m ever in Brighton again.  Cheers Dave.

Side note:  I requested a ‘press-pass’ to the up-coming London ComicCon at the excel centre on October 26th and was promised access by the marketing team.  It looks like a pretty solid Con judging by the tone online.  It may — or may not — live up to the dizzy and glorious heights of Fan Expo though.  We’ll see.