Arguably the most recognizable figure in popular culture, transcending generations and outliving his creators – one of (maybe) 3 fictional characters from the realm of comic books whom proudly parade as household names across the world.

In comics, the series ‘Superman:- The Man of Steel’  was designed to “reboot the Superman mythos”,  with a slightly jaded DC deciding to give Superman an updated ‘look and feel’ in a bold and impressive grasp for new readers… sound familiar? The series won ‘fan favourite’ awards and reinvigorated the tone of the character, freeing the creators to push him in new directions.  The title, “The Man of Steel”,  has now been applied to the forthcoming movie, in which we see a Superman without his red pants – very much confirming the relevance of the new 52 designs – and their future influence on multiple platforms for story. 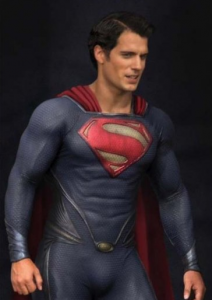 So, with a character as big and bold and beloved as Superman – someone so ‘American’ (though he’s obviously not American as he’s an alien from another world)… are American fans still irritated by the Englishman cast to play him? Or are they over it?   Actor Henry Cavill is from the isle of Jersey (a Great British island of the coast of Normandy) and – as is widely reported already, Cavill is part of a Great British invasion cleaning up in Hollywood currently, with Tom Hiddleston (from London) as Loki, Andrew Garfield (whom was born in Los Angeles, to an English mother from Essex and an American father from California and moved to England when he was three years old) plays Spidey, Christian Bale (from Wales), Rhys Ifans (Wales)… the list goes on, in front – AND  behind the camera and with an ever increasing British presence in Superhero movies – follows an ever increasing interest from the Great British, mainstream media.

British Comedian David Mitchell writes for the Guardian and asks (rather ungratefully) “Are American superhero roles worthy of British actors?” and maybe such a question in a national newspaper shows cunning as – comic book fanboys are known for being quite vocal and possessive online… seeking out stories no matter where they appear, driving up the traffic and engaging with the content.

On the flip side, Robert Downey Jr plays (in addition to Tony Stark) Sherlock Holmes, a quintessentially English figure in popular culture – and while there’s been little fuss made over it,  it does rather beg the question… Will a smouldering and burley Yank end up playing the most English of all ‘heroes’ 007 himself, James Bond? Which (by the way) would quite literally be the end of the world, as I’d like to think…  that’s scheduled to happen right after Hell freezes over.

A summary of this week’s ramblings would be… I love the symmetry with which Superman appears to be coming back to the big screen… a subtle, timely and reflective nod to previous AND current attempts to recover, reanimate and recondition the rightfully, respected, regal rogue.

But, does it matter to Americans who plays Supes?… should it matter?

Next week from Across The Pond  – An evening with Dave Gibbons at London’s Cartoon Museum.  Dave is set to present, explain and describe his work on Doctor Who from the late 70s/early 80s.