So when you last heard from me about my arduous endeavour, I had just traded for an early appearance of Herbie aka the Fat Fury. This guy: 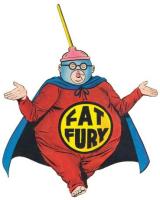 Now some of you scoffed at my trade, but I knew that Marc of Big B Comics is a huge Herbie fan. I know that I started out at Big B Comics, but you need to make the trade where and when you can.

Marc had a lot of great stuff, and he wanted that Herbie, but he is a crafty fellow and I was unable to sell him on a low-grade FF#2. Not to worry though, because at Fan Expo I was able to trade him for a very nice copy of Tales of Suspense #59. Now Tales 59 is a nice key Iron Man and Captain America book. Plus, I don’t know if you have heard but Iron Man and Cap are hot, hot, tastes like burning right now because of a little Avengers movie in the works.

This trade reminded me of something though. I don’t know squat about comics. That is, I have a tenuous grasp on grading and the dollar value that I should bestow on each prospective trade. I should clarify: I don’t know anything about books higher than VG. If you ask Walt he will be happy to tell you that I am a F-G specialist and have owned almost every key Marvel in that grade. However, I start to become a bit lost once we get into a VG plus range.

Anyway if you are in the Hamilton area be sure to check out Big B Comics and let them know that you appreciate their participation in this noble quest.

My road to AF 15 is getting much harder, both due to my own lack of knowledge but because I am now trading for books in the $450-$500 range. As the prices go up the trade will become harder make.

I wonder if I should have just tried getting 1000 copies of X-Force #2? Advantage seller!