Looking ahead to the not-so-distant Summer of Superheroes, It’s easy to feel excitement for the coming ‘events’ in comics… on printed pages, glowing screens and – in 3 dimensions in our periphery.

As comics-people, we’re all waiting for the same things/events I guess, I just wanted to share my  favourites – and invite you to share yours.

The first on my list is Justice League #7, available at the local comic shop this week.   With the re-introduction of mysterious character Pandora  whom could (potentially) become an integral ‘cog’ in the new DCU’s continuing, blissfully ignorant and on-going…  rotation.  Revealed in the intro (Issue 6 – titled ‘The Beginning’)  was the startling realisation that she… (Pandora) may hold the key to the secrets behind the DC re-launch from inside the fiction.  The full extent of her current knowledge/involvement in… (and of) the old DCU (since Flashpoint/New 52) will of course, only be teased in the coming issues… not fully divulged.  Is she aware of the old universe inside the story? is she capable of reversing everything? do we want… or even need that information at this point?  Whatever happens – the DC story as a whole continues here, the pivotal moments that concern the entire DCU will be available on the pages of Justice League, probably in quite vague and cryptic suggestions, rather than clear and concise facts… Johns.

The next little thing along for me is Dan Jurgens and Keith Giffen taking the reins on Superman from George Perez and Jesus Merino starting in issue #7.   Is it disappointing that DC is changing the creative teams around so quickly following the re-launch? Or is it refreshing? I’ll be checking out the books for IVAN REIS’ covers alone.  The forthcoming story/synopsis sounds quite lame… to be frank I’m not so confident in a successful run to #12 before the inevitable ‘3rd wave’.   Reis however is a hero himself – and may well end up saving the day on this project – interested.  On sale MARCH 28 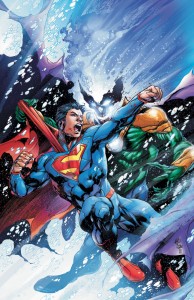 AVENGERS VS X-MEN – everyone’s excited about this… right?  Writers Brian Michael Bendis, Jason Aaron, Jonathan Hickman, Ed Brubaker and Matt Fraction are joined by John Romita Jr, Olivier Coipel and Adam Kubert on art – to tell a story based around the biggest fight in the MarvelU since Civil War? We’ve all seen the adverts, the match-ups, the pre-story… Marvel.com: “The Avengers and X-Men have learned that the all-powerful embodiment of both death and rebirth known as the Phoenix Force is on a crash course for Earth…and it needs a new host to unleash its immeasurable power. But what is the shocking decision tied to the Phoenix’s return that will pit the Avengers against the X-Men? And when good friends become bitter enemies, what does this mean for the future of the Marvel Universe?” It probably means that we’ll be treated to some extraordinary fight scenes and artwork that most of us have fantasized about for years. It also means (in my head) that the characters will all need to ‘win’ in some way, to maintain their value, limiting the potential outcome slightly.  Who cares though… sold.

Before Watchmen. Again, anyone invested comics in any way will at least… look at these books, based on simple curiosity alone… surely?  The seven summer series which delve into the lives of the six main cast members in their ‘early years’ already have a suitable reputation, and a lot to live up to.  DC also plans to end the hotly anticipated run (1 issue published each week over 35 weeks) with a one-shot epilogue – capping the entire event and no doubt opening the door for a sequel movie… One that couldn’t be made and be taken seriously by the fans, without an original story in print, to draw from.  The creative teams on these books are seriously impressive with original “Watchmen” series editor Len Wein and colourist John Higgins joining the formidable list of creators involved.  The pick of the PR art is (for me) Adam Hughes’ cover… goodness me.   Meanwhile, unquestionable creative genius Alan Moore has been well documented in his disappointing resistance to these additions – in contrast – artist Dave Gibbons gave his blessing to the project saying, “I appreciate DC’s reasons for this initiative and the wish of the artists and writers involved to pay tribute to our work. May these new additions have the success they desire.”  Truly can’t wait for this. 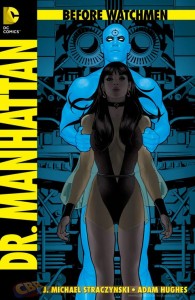 Finally – the Coming Comic Conventions in the UK that could be cool… clearly.