Scared yet? Well you should be. Halloween is drawing closer and of course the nights of monsters and creepy things will once again be upon us.

Of course I can’t just simply point out my favourite covers, a little history is due as well.

When it comes to horror, no one did horror comics better than EC: an Entertaining Comic. The originator of EC was 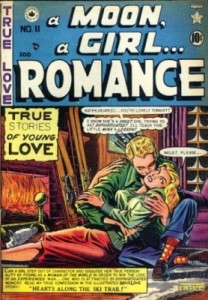 actually Charlie Gaines, also called Maxwell C. Gaines. And for those who don’t know, he was also the creator of what can be known as the modern comic by putting a bunch of comic strips together and calling it Funnies on Parade in 1933. After Gaines’ untimely death, his son William (Bill) Gaines inherited a fledgling comic company that was producing stories about the Bible. Gaines was trying a number of different titles such as Moon Girl Romance, with really not much success.

With the help of Al Feldstein, and other creators, Gaines decided to try a new comic with a horror theme. So they took the publication of Moon Girl Romance with ended with #11, and changed it to Vault of Horror #12 in 1950.

Vault of Horror was a big success and of course that spawned more horror comics like Tales from the Crypt and Shock SuspenseStories.

And with that, the comic medium would be changed forever. After their success, as many as 50 different horror comics emerged.

Harvey Comics, which is well-known for their Richie Rich, Casper and Hot Stuff line of comics, also had a stint at publishing horror for a while too. Harvey Comics, founded by Alfred Harvey, realized a viable market with Horror comics. And when Vault of Horror and the other EC comics were succeeding, Harvey also started their own line of horror comics starting with Witches Tales #1 in 1950.

Harvey was also publishing Black Cat comics: this was a comic about an early female superhero. In order to increase the number of horror titles, Black Cat became Black Cat Mystery and the star character of the title no longer had anything to do with the title. Later they would then release Chamber of Chills and Tomb of Terror. 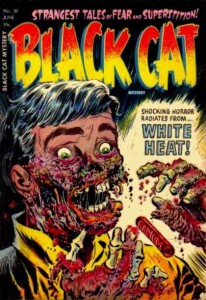 So why have delved into the history of horror? Well it’s interesting, to me anyways, that although horror comics were certainly made popular by EC, they weren’t the only ones out there putting our bone chilling tales with covers that, to this day, still give me the creeps.

One last point on older horror comics, the most horrific to me, of all, were by Lee Elias, who worked in comics up until the comics code in 1955, then returned to work for DC in 1972 and also taught at the Joe Kubert School of Art. His covers include Black Cat Mystery #50 and Tomb of Terror #15.

Horror comics made a return in the 1970’s in a big way with DC’s titles such as House of Secrets, House of Mystery, Ghosts, The Witching Hour, and Tales of the Unexpected, Secrets of the Sinister House, Secrets of the Haunted House, Weird Mystery Tales, Doorway to Nightmare and Tales of Ghost Castle . 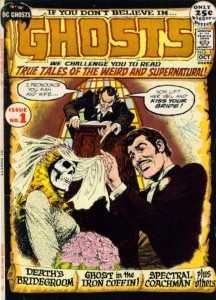 Although, even DC, which would have been National, tried to jump on the horror bandwagon early with both “House” comics and Unexpected in the 1950’s. Oh, and I would be remiss to not mention Bernie Wrightson’s and Len Wein’s Swamp Thing, which started as a cross between horror and superhero type of comic.  Marvel tried to emulate the same thing with titles such as Werewolf by Night, Tomb of Dracula and Dead of Night and of course Ghost Rider.

These days horror comics are all over the place with the advent of titles such as Walking Dead, Hellboy, and even Marvel Zombies.

I think for me though, the most interesting facet of horror comics these days is a return to ‘monster’ style horror comics. The early days of horror comics were far more terrifying because the star wasn’t a sort of made up monster or everyday zombie, but rather humans.

The stories during the EC era were about people who were doing unspeakable crimes to other people. The creative teams pushed the limits as to what they thought a human could be propelled to do. The characters in the stories were sick and demented individuals.

If you just take a quick look at the cover for Witches Tales #25, we see a bell tower 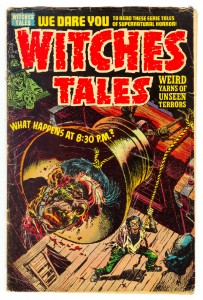 that has a bell but with a human head replacing the bell striker. There is a crazed psycho looking up at what he had done in the background. If we let ourselves journey into that idea for a minute, we have to remind ourselves that the character took the time to kill someone, decapitate them, replace the bell-ringer with said decapitated head, and then attempt to “ring the bell”.

So although modern horror comics do have an appeal especially with the zombie craze which won’t seem to go away, I have made a point that I think the horror comics were far more deadly than today’s zombified everything. Check out some of my favorite covers within this article, and I think you will see why.

Here are a couple more covers, just for fun. 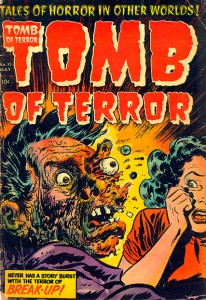 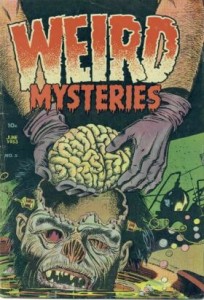