I’ve been an on and off collector for about 25 years. There are massive gaps in my collections that every once in a while I feel the need to fill. To make matters worse I go through this strange collector phase where I’ll focus on a theme, artist, character or cultural significance and just scour store bins looking to finish my set. For the past few years I’ve really been focused on comics that have some cultural significance to them – if not in pop culture then at least within the comic community. It’s really amazing what deals you can find. A perfect example is Lobo #1 from Dell comics (as seen on Undervalued Spotlight #44), the first comic to feature a black character. I’ve been able to grab a VF copy for about $30 but it’s interesting how many collectors and dealers haven’t the slightest clue this issue exists. And that’s okay because as much as I know about comics and comic history – what I don’t know can fill a warehouse! There’s just way too much out there to know or see. Thankfully the internet has helped some, but I have to be honest, no source has helped my collecting like DK’s historical Marvel and DC books. There are several good ones but I just picked up a fantastic new book released in August that I’ve already read cover to cover. 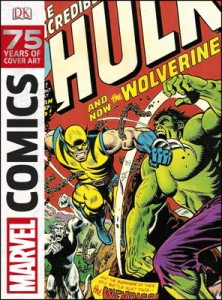 Marvel Comics: 75 Years of Cover Art is a beautiful 319 pages of glorious comic covers throughout the years. Although the images are vibrant and stunning, its real strength is in understanding the subtlety and absurdity of what makes a memorable cover. It’s a great read! It’s also a large book, 14 inches in height, so keep that in mind.

All the famous covers are here: Amazing Fantasy 15, Fantastic Four 1, and Hulk 1 with bite-sized blurbs about who drew it and the purpose behind it. What I really enjoyed were the facts I didn’t know, or things that I noticed but flew over my head. Case in point: X-Men 112 by George Perez and Dave Cockrum is featured and discusses that the prominence of Wolverine on the cover was a result of John Byrne (interior artist) wanting a fellow Canadian to play a larger role in the comic. Interestingly, X Men 109 is neither mentioned nor shown. (It was really interesting seeing how many previous X-Men covers completely ignored Wolverine)

A curious addition is ‘Featured Artist. A two page spread with mini bio for Kirby, Ditko, Sal and John Buscema, John Byrne and Romita Sr. and Jr. It’s a nice concept to feature a spotlight of Marvel’s better known artists; however, I found it brief and left me wanting more, not in the good way. In all fairness one could probably write a book on these artists alone, its brevity only highlighted who was not included. Really, you couldn’t do a feature on Steranko? How about McFarlane? There weren’t even pictures of the artists. It left me scratching my head as to its inclusion.

A few beefs I need to get out of the way: if you are a huge fan of the Golden Age era you’ll be left a little underwhelmed as only 15 covers are shown. There’s no Red Raven, but thankfully, Millie the Model was included.

A book this beautiful shouldn’t have factual errors in it, they stick out like a sore thumb – I’m pretty sure Kevin Smith didn’t write Daredevil in 1988. I caught a few others as well. 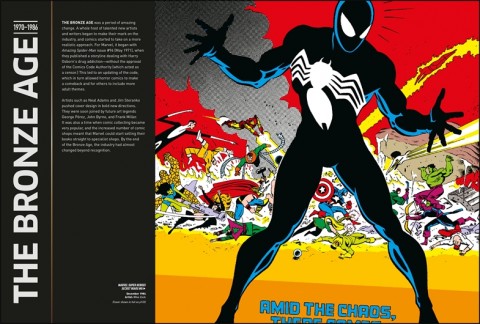 Marvel Comics: 75 Years of cover Art really should be called Marvel Superhero Covers as there’s much missing. The Silver Age pre-Fantastic Four is sparsely shown. Horror of the 70s is reduced to a few Dracula covers and the odd Werewolf by Night and Boris Vallejo has only two covers shown in the Bronze Age chapter; neither of them are Conan.

The organization is questionable as well. It’s initially broken up into Golden, Silver, Bronze and Modern age eras, but that’s it. At times, comics seem to be ordered alphabetically by title, but it’s sporadic. It’s not a huge issue but it feels off when I’m reading about comics in the early 2000s only to jump to early 90s then to mid-80s and back to late 2000s. 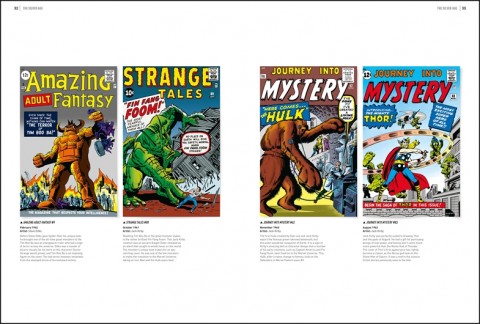 Although it does discuss cover design, I felt at times it held back. It could have delved deeper into the role design plays in the overall cover. There are a few times where the title features prominently into the cover’s theme (the Hulk) but that got me thinking about the titles in general – specifically font choice and placement. How much time is spent on titles? They rarely change but when they do, what motivates it? What is the process like? I had a recent conversation with my comic store where I was complaining about issues I’ve missed simply because Marvel placed the title on the bottom of the cover as opposed to the top and I’ve accidentally skipped them because of how he has his comic shelf built. This is apparently not an original complaint and Marvel is aware of it – they simply don’t care. Also, going through my long box takes longer as I now have to pull out every comic when I’m looking for a specific issue. I can no longer briskly flip though my titles…Grrr!

Don’t let these points dissuade you; I’m going out of my way to find faults. This book is a visual treat. It’s nice to have a single book with a collection of titles at hand to go over. Its greatest strength is that it loves these covers as much as you do – and it shows. Its diversity is welcomed and has everything a super hero comic fan could want. All of my favourite titles are robustly represented here and even a few I hate but have gorgeous covers nonetheless. All the top artists are reproduced beautifully: Walt Simonson, Alex Ross, Neal Adams, George Perez, Todd McFarlane, Jim Lee, and so on (but noticeably absent is Rob Liefeld. I’m not entirely sure how I feel about that). Sure there may be a few questionable choices but those are few and far between, and all are reasonably explained as to why they were included. And then there are covers that I always thought were beautiful, but didn’t realize it until I saw it here.

Marvel Comics: 75 years of Cover Art retails for $50, but I managed to get one online for $30. Unfortunately, this book comes with two prints and as such is wrapped in a cellophane film that prevents you from perusing it in bookstores. Either way this book is well worth the price. I’ve already added a few comics to my ‘want list’ because of it.