I’ve been following the online kerfuffle among some fanboys that Idris Elba is playing Heimdall in Thor, which made the front page of Yahoo!Canada this morning. Some are saying that this is political correctness run amok, others are saying that this is “messing with the natural order of things.” Some are just peeved that their beloved series is not being adapted in the way that they want it to be.

If I may distill the criticism down to its essence: a black actor is playing Heimdall, a white Norse God who was “the whitest of the gods” (thanks Wikipedia!),  is wrong because it is disrespectful to both the comic book source material and Norse mythology. However, keep in mind that all of this is frame in the decidedly racist discourse of “I’m not a racist, but….”

Comic book film casting will always be controversial, regardless of characters (see: Keanu Reeves as John Constantine) simply because different people envision adaptations differently. Some want it exactly as the source material is, usually the case with fanboys and fangirls. This is next to impossible, by the very nature of adapting one medium to another. The method of adapting a narrative is the process of first reading the source material, interpreting it, and then recreating it. In addition, because adaptations are to a different medium, they are re-mediations, that is, specifically translations in the form of inter-semiotic transpositions from one sign system to another. Within the process of such a transposition from one medium to the next, both the signs and the signifiers change.

Therefore, a film adaptation is, by its very nature, different from its comic book (or mythological) antecedent/source. It relies on different sign systems and on different ways of communicating meaning. Just as the superhero comic book has a language, a set of conventions through which the author can communicate meaning, so too does the film. It is through this process of re-mediation that those subtle and not so subtle changes occur within the adaptation. Negotiating the filmmaker’s interpretation of the adaptation with the source material is a tricky thing, especially when the audience is aware of the source material and when that adaptation is explicitly linked to its comic book antecedent. Unavoidably, the adaptation becomes a kind of intertextuality as comic book fans are well acquainted with the diegetic worlds from which the adaptations drew, identifying references not only between the original text and its adaptation but also from the wider universe within which that original text is situated. Furthermore, Thor cannot be a simple transposition of the comic book source material onto film because of the intertextuality with other Marvel films – especially the upcoming Avengers movie, which will draw all of these characters together.

I, for one, have faith in Kenneth Branagh’s vision for Thor, including any changes to the source material. And, frankly, I think Idris Elba’s going to do a fantastic job – he was absolutely brilliant in both RocknRolla and The Losers. 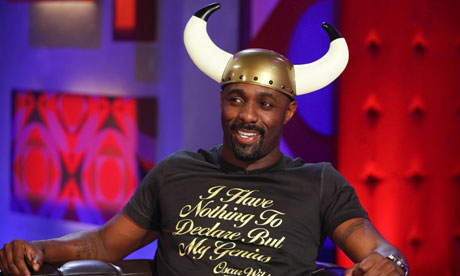 Shelley Smarz is a comic book scholar and business woman. She spends her time advocating for silly things like women’s rights and increasing both equal representation and visibility for all (whether in popular culture or in business). Stay tuned for Shelley’s next column where she dissects the website Boycott Thor!