Before I move onto the announcements, I have to congratulate CB Cebulski on his thirteenth consecutive appearance at Fan Expo Canada. CB (who is Marvel’s Senior Vice President, Creator and  Content Development) is joined on this panel with Arune Singh (Manager of Sales Communications) and Steve Wacker (Editor of Amazing Spider-Man and he tried valiantly to come up with what the initialism HAMMER stands for).

In October 2010, the five-issue miniseries Chaos War will be released. This series continues from the storylines started in Incredible Hercules and Incredible Hulk and will deal with the war of the Gods and how different pantheons team up with different heroes. Galactus makes an appearance, so that makes everything AWESOME! in my book.

While the main action occurs in the main title, there will be a number of spinoffs, including Dead Avengers (with appearances from dead characters like the Wasp and Captain Marvel) and Alpha Flight. The series and its spin-offs play in that interstitial space between the living and the dead and looks to be awesome! In other Alpha Flight news, the panel reported that there’s a strong likelihood that we’ll be seeing a return of the team (and its original characters) in its own series over the next 12 months.

As for Marvel’s relationship with Disney, there will be a number of super-secret variant covers that will be popping up, including one for Avengers Academy #7, which also sees the return of Giant-Man.

There’s going to be an upcoming Thor book from Mike Carey and Mike Perkins called Thor: Wolves of Asgard, where we see the reappearance of Hela.

Unfortunately for Nightcrawler fans, we will not be seeing him again for awhile. As CB put it, “Dead is dead.”

Strong buzz about Allan Heinberg’s and Jim Cheung’s Avengers: Children’s Crusade. The panellists lauded the return of the Scarlet Witch. They say that, while this story should be a huge event, the strength of the series (and Wanda’s return) lies in the fact that it’s told in a very personal way. Despite the focus of the individual, this heart-wrenching story’s impact reverberates over the entire Marvel Universe. Apparently, the ending is AMAZING.

As hard as I am on the industry for poorly representing women (in both behind the scenes and as characters), the panel did make a good point. The Women in Marvel initiative was to publicize what Marvel’s been doing over the years – they’ve consistently had more women and more minority creators than any other company in the industry. What the Women in Marvel initiative did was introduce new female creators into the mix. (I’m tickled that a lot of the women that were showcased during Girl Comics and Her-oes have gotten gigs out of it. As problematic as the series was in terms of “trying to attract that elusive female market in comics”* this really makes me excited for the future.)

Also, I’m pleased to report that the Senty is NEVER AGAIN coming back. WHOO HOO! I hated this cheap Superman rip-off and was annoyed with the giant retcon (and usually they don’t bother me much) to integrate him into the Marvel Universe. He was just a profoundly boring and annoying character.

Finally, Marvel (who’s been at the forefront of the comics’ digital revolution) has seen some really good success in the digital market (it’s bringing in a whole bunch of readers). This means that we’ll be seeing some experiments in digital distribution in the future. Exciting!

Best (collective) quote of the panel: “For the sake of this panel, Deadpool is Canadian. He’s said the oath, drank the syrup, and ate the poutine.” 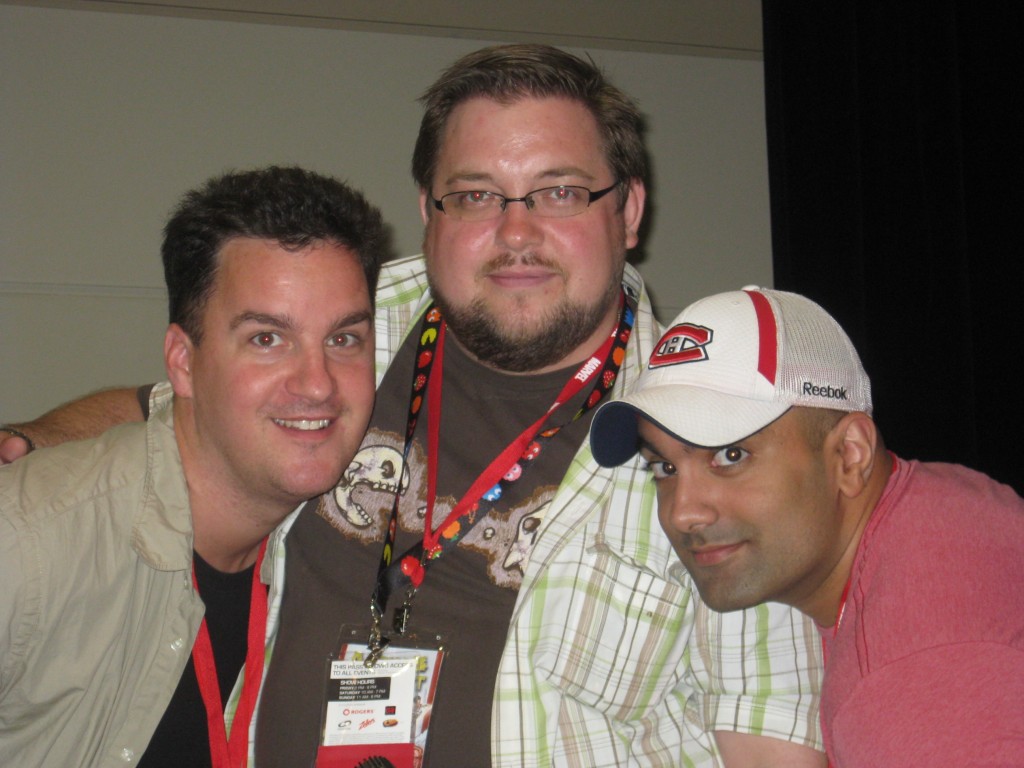 *Not all girls like unicorns and sparkles and 90210 guys. As a general critique, rather than trying to attract new female readers by putting out books you think girls will like, companies need to work on making sure that the industry and the books are female-friendly (i.e. Not horribly sexist, resist women in refrigerators, etc.). Once you do that, more girls will be attracted. Trust me.

Shelley Smarz is a comic book scholar and a wanna-be Lois Lane. The internet in the press room is driving her insane. Her favourite cosplay of the day was the WORKING Dalek. It was single-handedly the best costume she’s ever seen.

Diary of a Comic Book Goddess :: Day One of the Toronto Comicon in 140 Words or Less….

Diary of a Comic Book Goddess: Women in Comics Edition

Diary of a Comic Book Goddess: The MRP of Doom (Part One)