As I do for every comic convention the bulk of my time was spent in Artist’s Alley over the four days of Toronto’s Fan Expo 2012. I collect comic art and so wait in line for hours and hours to get a sketch. This year there was a bevvy of comic artists in attendance, or at least the show’s guest list said so.

Artists seem to work in one of two ways for sketches: they add you to a daily or weekend list or you wait in line. There are some exceptions like Tony Moore who auctioned off his three commission options at $810, $810 and $614 each; yes, that’s correct, those are very high prices. Anyway, I was early on Thursday so I had a chance to get the lay of the land and see what was what. Adi Granov and Faith Erin Hicks were set up and ready to go, as was the always early and professional Ray Fawkes.

I didn’t have a list of artists I wanted art from, mostly because I didn’t know what people were charging. After seeing Adi Granov complete a colour Black Widow piece it seemed like that was a good way to go but I didn’t commit until Friday morning. The same for Esad Ribic who was seated beside Granov; I was amazed at what he was doing and requested a Loki watercolour. He’s in action below. 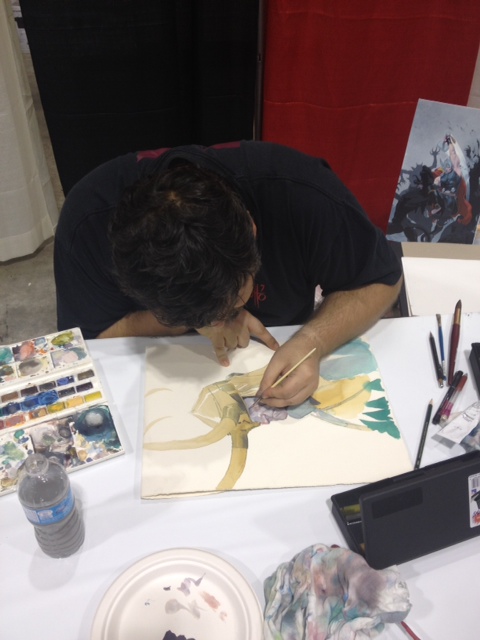 Darwyn Cooke did sign at his booth for a brief period on Saturday but he didn’t bring any art along and doesn’t do convention sketches anymore. My big disappointment was Michael Cho not having any original art to sell but with his amazing new book and future commitments he’s one busy artist. He did say he was doing something soon for one of the big two so I’m on the lookout for that. Ramon Perez was in and out of his table but I did manage to get a Buck Rogers sketch from him.

I was never able to spot J.G. Jones or Greg Capullo and don’t know if they were at the show at all. Every time I walked by J. Scott Campbell’s booth there was a giant line waiting for signatures but no artist at the table. I saw a lot of Ed McGuinness’ agent at his table and believe the artist was there for a bit on Sunday. Of course this was random walkabouts over the course of four days and I could have missed them.