I picked up Green Lantern Vol 1: Sinestro HC last week as I’m a Doug Mahnke fan and wanted to see what the New DC 52 had in store. Looks like a straight continuation of the story, including references to plot points that you wouldn’t get if you didn’t read the previous storyline before the reboot. Disappointing.

What is even more disappointing is that as I was working my way through the book I came to the sixth chapter (what are you supposed to call the issues when they’re collected anyway) and saw that the art was not by Mahnke. I flipped back to the credits page and checked for any information about a second penciller. 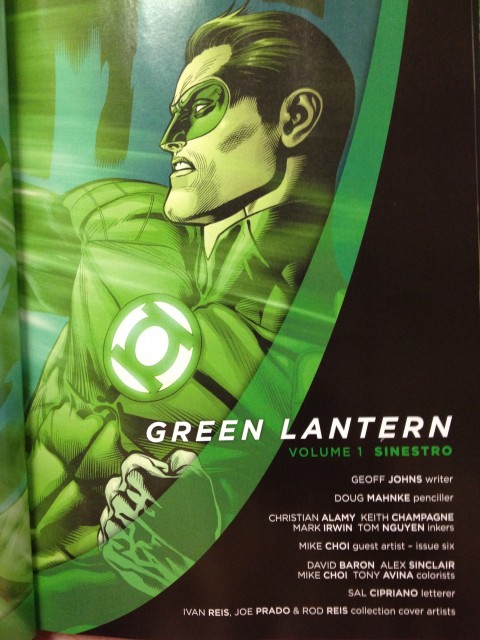 Hmm. Only one penciller listed, Doug Mahnke. Yet the art was clearly much different from the rest of the book. Slip down a bit on the page and you’ll see “Mike Choi guest artist – issue six”. Of course, a guest artist for one sixth of the work that isn’t mentioned on the cover. Yes it’s stated right there on the credits page but nowhere on the cover.

I was annoyed because I pre-ordered this $22.99 hardcover based on the creative team. Perhaps I had missed some pertinent information from the DC solicitation information. Here’s what DC shows on their website. 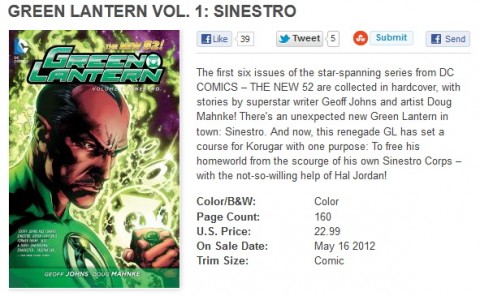 No mention of Choi in those credits, but it does say “with stories by” instead of just “by” so that does leave enough wiggle room to justify only listing Johns and Mahnke. Note those same credits on the cover. Misleading nonetheless.

Why get worked up over this at all, you might be asking. For one thing I don’t like fill in or guest creators on a book; as a single volume it detracts from the overall flow and is the main reason I’m not picking up a lot of Marvel books right now. As well I spent my money based on the information provided and it’s not the whole story; 16.7% of this volume was drawn by somebody else and that deserves mention and proper credit.