One of the highlights at any convention or expo are panels featuring the celebrity guests.  At the 80’s Toy Expo on May 4th/2014, there was a Q&A panel featuring voice acting Icon, Alan Oppenheimer.

Q&A panels can be tricky.  Since the questions are coming from the audience, you never know if the questions are going to be intelligent and well thought out… or sheer nonsense.  Luckily the Alan Oppenheimer had some pretty good questions from the crowd. 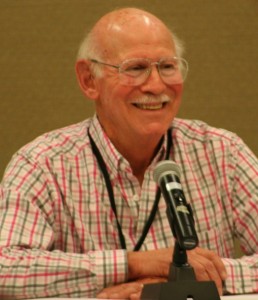 Most fans in attendance to the show know Alan Oppenheimer as the voice of Skeletor, his most famous character.  He has been the voice of many other characters too.  Vanity Smurf, Kringer, Mer-Man, Transfomers Beachcomber & Seaspray and Falkor from Never Ending Story.  In addition, he has had a long career in film and TV, with Six Million Dollar Man, Bonanza and Westworld being only a few of his acting credits.

His passion for acting and voice characterizations came from his childhood.  Alan Oppenheimer was born in 1930 in New York and he would spend hours listening to programs on the radio.  At a young age he developed the skill of impersonation, and he was able to imitate the actors he heard.

Some of the early advice he received from directors he worked for, was to always be “better” and try not to think about the character and the role too much.  Do not act the part, just be the part and the performance will come naturally.  He also had some tips about voice acting as well.  Imagination is the key tool in a voice actors repertoire.  The voice actor has to visualize the character and the environment.  Since the actor isn’t in a real place, the process becomes very cerebral.  Some of the best voice actors are imaginative and are able to create the proper environment in their heads, for the character to come out right.

Alan Oppenheimer also said that he prefers voice acting over live acting now.  He has a studio set up in his house, and on most days he can be comfortable in his own home when he is recording.  He doesn’t have to be on a sound stage somewhere.  At his home studio, he can record and review as many takes as he likes to get the performance exactly the way he wants it to sound.

That was another tip he had for new voice actors.  Listen to your work.  Listen, then re-record your performance to change the parts that you don’t like, then listen again. Many times we can be our own worst critic, and if you are happy with your work, other people will be happy with it too. 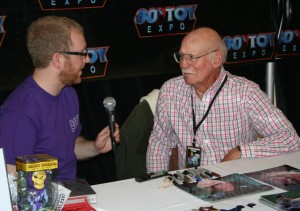 When asked about his most famous role Skeletor, Alan Oppenheimer said he adlibbed the character a bit.  Skeletor was originally created to be menacing and powerful.  Alan added elements of comedy to the character, and it went over so well with the producers and writers they started adding more humour into the show.  Obviously it worked since He-Man has a huge following 30 years after it debuted on television.

Alan Oppenheimer said that he never realized how important his work was to people who watched it or grew up with it.  He said that there have been numerous occasions where some of his work has influenced people.  Either getting them through some rough times, or an inspirational message in a particular episode helped people.  At the time he considered his work another job.  Just a pay cheque.  But 30 years after the fact, he has found out that his work meant a lot to the people who grew up with it.  Which was also easy to see with the long lines waiting to meet him on the Expo show floor, or the people waiting in line to ask him a question at the Q&A panel.

It was a real pleasure listening to him speak, and hopefully he will return to a future show.