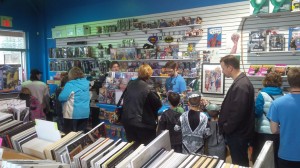 I spent Free Comic Book Day 2014 helping out Big B Comics in Barrie.  The night before FCBD we were set up at the theatre in Barrie for Amazing Spider-Man 2.  We had a table set up displaying all the comics that were available for pick-up the next day.  Plus I was able to talk to the audience at each of the screens showing ASM2, to talk to them about FCBD.  What it’s about, and where they can join in on the action.

It’s still surprising that more people don’t know about Free Comic Book Day yet.  It is also funny when you see people’s reaction to FCBD.  They look at you odd and say “what’s the catch?”  People aren’t used to getting something for nothing.  So it just takes some time to explain to them that it’s just a way for the comic book industry to market itself, and try to get more readers buying comics.

The weather in Barrie was overcast and rainy, but that didn’t stop the crowds.  People were lined up before the doors even opened.  They were excited to get their books.  This year’s selection was pretty good for FCBD.  The issues I was looking forward to most were, G.I. Joe and Transfomers, Guardians of the Galaxy, Rocket Racoon and Grimm Fairy Tales. 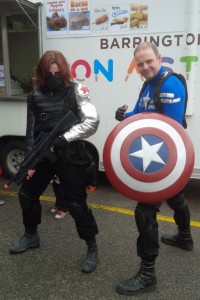 Stores have different rules for free comics.  But Big B would allow customers to get more than their allowed books, if they brought in a food donation, had a library card or participated in the Big B Comics costume contest.

Speaking of costumes… there were costumed heroes in attendance too.  Members of the 501st Legion were there (fitting having Star Wars characters there, with the next day being May the 4th).  There was an appearance by Superman and Spider-Man.  Also making an appearance was Captain America and Winter Soldier (my cosplaying partner Stephanie and myself).

Stephanie worked at throwing together a Winter Soldier costume for FCBD.  She did such a good job on it, even without the full costume on people knew she was the Winter Soldier (as the barista at Starbucks wrote ‘Bucky Barnes’ on her Americano). 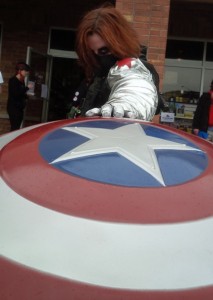 It’s always fun seeing kids get excited for the characters I am portraying.  It is a lot of fun for me seeing them get excited that they are seeing a “real live hero” (hey… I’m not going to burst their bubble).

I even had someone from one of the other businesses in the same complex as Big B, come over and ask me to record birthday wishes for her nephew.  I had no idea what to say, so I threw together the best “Captain America” speech I could think of, and the girl said it was great and it was exactly what she was looking for.

After talking to some of the customers who were leaving with their new comic books, some of them had never been in the comic shop before.  Some saw it on social media sites.  Some were at the theatre the night before and wanted to check out what I was talking about.  Hopefully those new people will return, and become new collectors of comics.  It is a fun and rewarding hobby, and with Super Heroes becoming pop culture icons, it’s nice to see where those characters come from and where they are going. 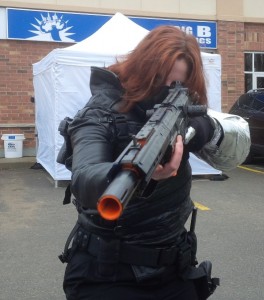 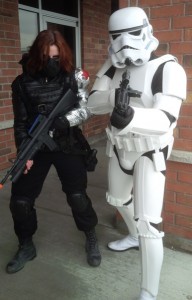 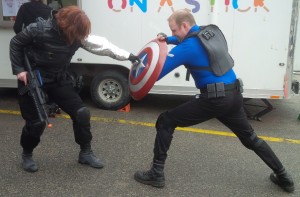