If you take a look at the comic shelves, movie theatres and toy shelves over the last couple of years, there has been a revival of our favourites from the 80’s.

Transformers has been the most successful 80’s franchise to conquer the new millennium.  The 3 Transfomers movies dominated the box office.  Also there have been 2 cartoons appear on television, and each movie and TV show had a corresponding action figure line to support the respective show or movie.

G.I. Joe finally came to the big screen in 2009 with the movie, G.I. Joe: Rise of Cobra.  It has been hit and miss on the toy shelves (in Canada) but there have been lots of new G.I. Joe products coming out over the last 5 years.  For a short time there was also an animated series, G.I. Joe Renegades, but that has been put on hiatus (or cancelled).  This summer G.I. Joe will return to the big screen with G.I. Joe Retaliation.

Teenage Mutant Ninja Turtles have also seen a revival as well with the new IDW comic series, and news about a new movie coming out as well.

So with all these 80’s franchises coming back, what could be next?

I think a great franchise to come back is C.O.P.S.

C.O.P.S. was an action figure line that was released by Hasbro in 1988. 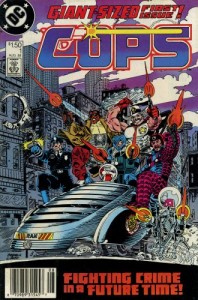 In the future (the year 2020 to be exact), Empire City is a victim of crime.  The man behind all the crime in Empire City is Big Boss.  The FBI send in Special Agent Baldwin P Vess to stop Big Boss.  During an investigation Agent Vess is almost killed (Vess’ injury differs between the cartoon and comic book).  While he is recovering in hospital, he has a plan.  His plan is to recruit the best police officers around the country, to work together to help bring down Big Boss.  This new organization’s name is Central Organization of Police Specialists, or C.O.P.S. for short.

Each officer will use their own law enforcement specialty and tactics to bring down Big Boss and his gang of Crooks.

C.O.P.S. wasn’t a toy I got into in the 80’s.  I loved the idea, and the cartoon is still one of my favourites that was on television, but at that time I was focused on collecting G.I. Joe (interesting tidbit, comic book writer Larry Hama wrote the filecards that came with both G.I. Joe and C.O.P.S. action figures). 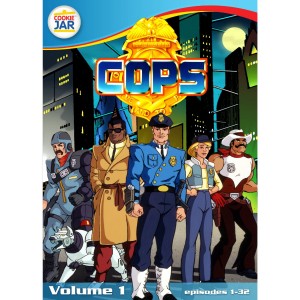 The animated series has been difficult to find on DVD.  Shout Factory released the first volume in 2006.  Volume 2 was released later, but never to retail.  The series is now distributed by Mill Creek Entertainment; they specialize in releasing complete series at very low prices.  He-Man and She-Ra are now distributed by Mill Creek.  Now you can buy the complete C.O.P.S. series in two volumes (I found mine at Amazon.ca.)

The idea of C.O.P.S. is perfect to make a comeback now.  If the board game Battleship can have a live action movie, I can’t see any reason why C.O.P.S. couldn’t make it to the big screen as well.  With today’s CGI, it would be easy to create Empire City of the future.  And since Hasbro is getting good at making movies, I think it could be possible.