Hmmm…. if you read that title a certain way, it sounds like poetry.

This weeks column is just a mix of everything, from my comic inspired week. 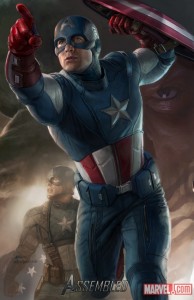 Friday night, Blue Beetle Comics had a table at the theatre, helping promote the store.  I headed over to give them a hand to help, and I got the opportunity to see Captain America: The First Avenger.

As you can expect, like most comic movie fans, I couldn’t wait to see this one.  With eager anticipation, the movie started, I put on my 3D glasses and it was awesome.

Captain America is clearly the best movie of the summer.  The movie has action, drama, and humour.  I wasn’t sure about Chris Evans as Cap.  Don’t get me wrong, I really like Chris Evans.  But most of his comic book movie roles (Johnny Storm, Jensen in The Losers, Casey Jones, Lucas Lee in Scott Pilgrim), are comedy roles.  So I wasn’t sure if he was going to play the movie straight, or was he going to be goofing around.  I am glad I was proved wrong.  Steve Rogers was just funny enough, to make him a regular guy.  That kid from Brooklyn.

After seeing the movie, I can’t think of another actor to play Red Skull.  Hugo Weaving was perfect in his performance as Skull as well.  Overall the movie has a great cast in general.  I hope in future Captain America movies they are showed somehow (flashbacks???), especially Tommy Lee Jones and Neal McDonough (Dum Dum Dugan).

Captain America is just a great movie.  And if you stay after the credits you will see what is in store for the future.  Now I can’t wait for The Avengers, May 5/2012. 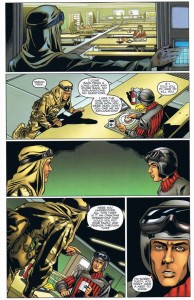 One of my first columns for CBD was about the return of Sneak-Peek (who was dead) to the pages of G.I. Joe A Real American Hero (ARAH).  At the time, I wrote that continuity was important in comics.  Sneak-Peek returned, with no explanation.  He literally popped out of the ground (check out my column, you’ll see what I mean).  At the time, Larry Hama explained that ARAH was a retcon (retroactive continuity) in motion.

Now we have ARAH #168.  In this issue, Dusty (who was present when Sneak-Peek was killed) confronts Sneak-Peek about his return to the G.I. Joe roster.  Sneak-Peek explains that Dusty “doesn’t have a need to know”.  This one statement was an easy explanation to bring someone back from the dead.  This page made ARAH #168 a great read.

I sent a message to Larry Hama about this:

Ed: When Sneak Peak returned to the pages of ARAH, I wrote a blog for Comic Book Daily about a character returning from the dead without an explanation.  Now with issue #168, and Sneak Peak saying it is classified, that explains everything with one line.  Was this part of the original plan, or did this explanation come from the fan reaction to the return of Sneak Peak?

Larry Hama: GI Joe was retconned from day one.  I literally make the stuff up page by page, so if I am on page 15, I have no idea what happens on page 16.  I don’t have a searchable db of the stories, so it’s very hard for me to check on my own “facts,” and frankly, I forget a lot of stuff.  The entire history of Snake-Eyes and Storm Shadow is retcon, so it actually seems to be a better system than having long-term continuity figured out.

Ed: Was Sneak Peak’s explanation “You don’t have a need to know”, was it for the fans, or just the natural flow for the story?  It was a great page in the comic, and as a big fan, it tied in well to SP’s return.

Larry Hama: There is a whole Sneak-Peek flashback subplot unfolding that will explain where he was and what he was doing.

I am excited to see what comes next for ARAH.  So all you Joe fans out there, stay tuned.  It looks like there is going to be some interesting twists coming from G.I. Joe.

I thought I would give the new DC RetroActive books a shot.  I like the retro feel and look to these books.  They have tried as hard as possible to make the books look like they were from the 70s.  They even used pulpy, not glossy paper (that was the only thing missing with Black Dynamite: Slave Island) which I think added to the reading experience.

The Batman issue written by Len Wein was really good.  Really cool looking art style.  The Bat-Cave is under Wayne Enterprises, which I guess that’s where it was in the 70s.  Even the dialogue is in a lighter tone than today.

The issue of Wonder Woman… well… I didn’t like the art (but I do like J. Bone’s art style, for some reason it didn’t work for me on this book).  I didn’t like the story, which is a surprise, since I like Dennis O’Neil.

The Flash Retro issue is a fun read as well.  Gorillia Grodd is the villain.  Hey, who doesn’t like a story about psychotic homicidal hyper-intelligent ape?

A Really Weird Side Note

While I was helping out at the theatre a lady came up to the table and started to talk comic books to us (Blue Beetle Staff).  She told us of her Grand-Father who recently passed away.  He was a comic collector.  His collection is now in her possession.  She told us of two books in his collection, and wondered if they were worth any money.

The first book she told us about was Captain America #1 from 1941.  She said it was encased in glass, and she was told to be very careful with it.  But she had no idea of it’s worth.

The other book had Spider-Man on the cover, but it wasn’t a Spider-Man book.  It was encased in glass as well.  I did a quick search on my trusty Blackberry and found a picture of Amazing Fantasy #15.  She confirmed that was the comic in glass at home.

We explained to her, that she may have a very valuable collection.  Which she was surprised, she thought they were just comic books.  I am not sure what the future holds for this lady’s collection.  But it will be exciting if there is a copy of Amazing Fantasy #15 and Captain America #1 floating around my area (and maybe get Anthony a couple of steps closer, on his road to AF#15).