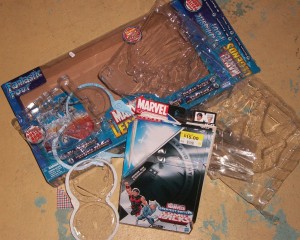 When you collect action figures, there is nothing better than tearing into that package and getting your hands on that action figure.  I am not a MIB (or Mint-in-Box) guy.  I like to get my hands on the toy.  What is the point of buying it if you can’t touch it?

I removed all the figures from the packaging and checked them all out.  When I looked at the floor I was shocked.  There is a lot of garbage left over from action figures.  And I think there is more wasteful packaging now more than ever.

Back in the 80’s G.I. Joe and Star Wars figures had basic packaging.  When you bought an action figure, it came on a card, sealed in a plastic bubble.  Sometimes the weapons and accessories were sectioned off in a separate part of the bubble.  The figure was just loose in that plastic little bubble.  Now sometimes there was damage to the figure from moving around in there, but if you were a careful buyer you would check out the paint quality of the figure before you bought it (you should do that anyways, but I’ll save that for another column).  Sometimes you didn’t have a choice.  If there was only one particular figure on the shelf and you wanted it, you would have to buy it with the damaged paint job.

Now the packaging has changed.  It still comes on a card (which often varies in size).  But instead of the figure being loose inside the packaging, there is an extra plastic tray that has the figure and accessories.  Sometimes the figure is in an action pose which leads to more problems (I’ll get to that one later).  So instead of one bubble, we have a bubble and a tray.  Which the new problem arises… recycling.

When you recycle plastic, depending on your region, you have to look for the recycling code number.  Some code numbers are not recyclable in all regions.  If your region cannot recycle those materials (according to rumour), they will be diverted to the landfill and skip the recycling process all together.  Essentially the extra packaging is just garbage.

The other problem I mentioned earlier is the figures in an action pose in the packaging.  It looks great for the “MIB” people, but for guys like me who take the figures out of the packaging it’s not a great idea.  Sometimes the figures are shoved in the packaging at an odd angle.  Over time the figure starts to conform to that odd angle, and will stay that shape after it’s removed from the packaging.  It is a real pet peeve of toy collectors.  I have a G.I. Joe Snake Eyes figure that is basically junk because when it was package it was posed to kick Storm Shadow in the face.  The angle of Snake Eyes’ leg was so odd, the leg warped.  Now the figure cannot stand on its own and it looks horrible.  What good is a ninja who can’t stand?

I have a couple of suggestions to the toy manufacturers to fix the problem of wasteful packaging.

First, pack the figures in a cardboard box.  Cardboard is easily recyclable and will break down in the environment easier than plastic.  I know there is a chance of more tampering with the packaging at the retail end (ie: customers opening the boxes).   But many other products are packed in boxes already.

Second, pack the figures in the plastic bubble and plastic tray that are utilized now, but use a plastic that is easily recycled at most recycling facilities.  As long as the recycle code is clearly marked on the package, it should be guaranteed that the plastic will be recycled properly.

Finally, go back to the way the figures were packaged in the 80’s.  Just use a single card with a bubble.  To prevent the figure from moving inside the package, a twist tie or elastic band could be used (which is common on most figure packaging now).  The figure would be held securely, and the amount of packaging would be reduced by at least one piece.  Which would make a huge difference in the landfills and recycling centers.  The reduced packaging would also make the figures cheaper to produce, and the manufacturers can pass the savings on to us consumers (‘cha right!).