This week the internet and Twitter-verse have been chock full of cool comic book news.  So instead of me rambling on, let’s just jump into the stuff that caught my attention.

It looks like Marvel has retained the movie rights to Daredevil, as of October 10th 2012.  After years of reboot news and stories, it appears that Fox has finally gave up on our blind Super hero.

If Marvel is going to make a Daredevil movie they better get it right.  I am fine with a reboot because it has been 9 years since the Ben Affleck version came out.  What I would like to see is a Daredevil movie trilogy.  I have heard rumours of a movie version of the “Born Again” story arc, and I think that is a complete mistake.

Don’t get me wrong.  I love Born Again.  It is the story that made me love the Daredevil character.  But that story is too difficult to just give to your audience without a back story.

I think it would work out perfectly.

The other benefit for Marvel having Daredevil back in its film ranks is (hopefully) the eventual Marvel movie event that includes every single Marvel character.  It could be anything.  Infinity Gauntlet/Infinity War.  Civil War.  Secret Invasion.

You name it, it could be anything.  I think that is what the Marvel Cinematic universe is heading towards.  It’s going to be cool… and maybe someday Marvel will get back Fantastic Four, Spider-Man and the X-Men.  Or the other rights holders will play along and let everybody into the sandbox to play. 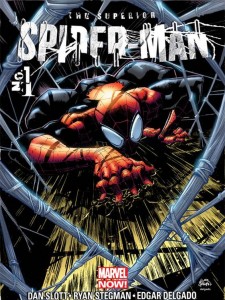 And it was all about Spider-Man.

It was amazing how mad the Spider-Man fans were getting.  I don’t blame them, but at the same time I know that this is comic books and this stuff happens all the time.

The one thing I can say for sure is I believe in Dan Slott… and it’s going to be good.

Once Upon a Time

I don’t want to admit this, because I am a guy.

I have a beard.

So I think that proves that I am a manly guy.

But as I said I hate to admit it but I am getting sucked into the TV show “Once Upon a Time”.

If you haven’t been watching it, the premise of the show is about a spell being cast on our favourite fairy tale characters.  They have been transported to a town called Storybrooke, and each episode’s theme flips between modern day, and a similar event that happened “Once Upon a Time”.  At the end of season one, the spell was broken but the displaced fairytale characters were not returned to their homeland.  The twist is they know who they are, and as long as they stay in Storybrooke they will have the memories of who they were in the fairytale land.

Now you might be asking what this has to do with comic books, but there are several connections.  One connection is the male lead in the series, Josh Dallas.  He plays David Nolan who was Prince Charming in the fairytale part of the story.  Josh Dallas was also Fandral in Thor.  And because of his commitments to Once Upon A Time, Josh Dallas will not be able to be Fandral in Thor: The Dark World.

Another connection for Once Upon A Time to comic book/nerd culture is Robert Carlyle.  Robert Carlyle plays Mr. Gold who is also Rumpelstiltskin.  Robert is a spectacular British actor who also played the villain in the James Bond movie, The World is Not Enough.

It is an interesting show (which I don’t want to admit) and it has many ties to comic books.  And fairy tales do share some of the same characters as comic books.

Is it a show you watch?

# Dan Slott# Daredevil# Once Upon A Time# Ryan Stegman# Spider-Man