My son recently had a birthday and he wanted to have a “Marvel’s Avengers” themed birthday.  My wife headed over to the local “party  store” to find all the Avengers merchandise we would need for the party.  She picked up Avengers plates, Avengers napkins, Avengers table cloth… are you starting to see a pattern here?

When it came to the invitations, that’s when she called me for help.  We could buy 8 Avengers invitations for $8.99.

For a piece of paper with Captain America, Thor, Hulk and Iron Man on it?

To just give away?

Not to sound cheap and thrifty here, but there must have been a better way to get an invite out, that would stand out.

My wife and I came up with an idea, but first I’ll tell you a little story about our inspiration.

My youngest daughter was invited to a birthday party on Halloween weekend, and the invitation for that party was so cool and original it really stood out for us.  She came home with a small cardboard coffin with her name written on the outside.  When you open it up there was a small plastic skeleton inside of it, with a small scroll under its arm.  Written on the scroll was all of the details for the party.

It was an ingenious idea.

And that’s what led to our idea for our son’s birthday invitations. 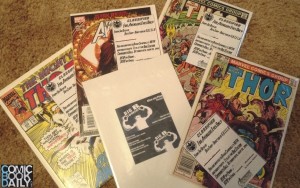 Since we were going to end up paying $1 per invitation we had the idea of picking up some comic back issues from our local comic book shop (most of you know I am a “friend of Big B Comics”).  I quickly made an invitation on the computer and tucked that inside the bag of the comic book.  On the back we put a copy of Big B’s business card, with the store’s address, so our guests would know where the store was.

THE IDEA WENT OVER AMAZINGLY!!!

We couldn’t believe the response we got from our invited guests.  The kids absolutely loved the idea that they were getting a full size comic book, as a gift even before they came to the party.  The parents couldn’t believe how excited the kids were about the comics, and there were several who had no idea that there was a comic book shop in Barrie.  With us including the name and address for the store, I know there have been a few of those kids who have gone to the store to check it out.

There were many reasons I wanted to do this idea for invitations to my son’s party.  First off, I wanted something totally unique and different.  Having 3 kids, we have seen our fair share of birthday invitations.  Most of them become forgettable, so we wanted something to stand out and be different (like the skeleton and the coffin idea).

Secondly, I am an advocate for kids reading.  I don’t care what they read, as long as they read something.  I feel comics is one of the best ways to get kids really excited for reading.  I felt this invitation idea was a good way to get kids interested in reading, and hopefully get them hooked on comics.  If the comic industry is going to survive and thrive, there needs to be new eyeballs looking at the printed page.

Third, I wanted to help promote my local comic book shop.  I’m not getting paid for it.  I’m not an employee.  But it is my hangout.  It is my “community” and I want them to be successful.  If my local comic book shop doesn’t thrive, I don’t have a hobby anymore.  Going to another store isn’t an option either.  Barrie isn’t like Toronto (or like when I used to live in Calgary), I just can’t go to another comic book shop.  This is the only one in town.  Word of mouth advertising is the best kind of advertising, and I hope my effort will help the store in the long run.

I hope you agree with me that this was a unique and different way of making invitations.  I really loved the idea, and wanted to share it with you.  It also goes to show that comics are just not for reading, sometimes you can get crafty with them too.