I know not everybody is into Cosplay.  It can be a nerve-wracking and scary undertaking if you think about it.  You are dressing up in costume, in front of a bunch of strangers.  They’ll look at you.  They’ll point and stare at you.  You will be asked to have your picture taken.  And you will also have heaped on you either adulation and praise, or un-wanted criticism.  Putting it that way… why would you want to even try it.

Now don’t get me wrong… I am not a Cosplay expert.  I don’t have years of experience dressing up at various conventions, and I don’t have a closet filled with amazing costumes.  I never entertained the idea before this year.  But it was after I talked to the amazing ladies from Cosplay For A Cure and Shantel Knight (Zombie Bit Me), I started thinking about doing more Cosplay and exploring this exciting side of this hobby we call comics.

Since then I’ve been Thor at Fan Expo.  I’ve been Captain America several times at local events.  And I have many more costumes in mind for future conventions and shows, but if you were like me and are entertaining the idea of donning the costume of your favourite character, start small.  Start at an event where it is easy to be in costume for the first time, and trust me, nobody will even notice you.  Halloween.

Halloween is that time of year where everyone can Cosplay.  If you are nervous on showing up in costume at Fan Expo in front of 80,000 people, try Halloween first.  If you show up at a Halloween party, be it a bar or house party, and there are other people dressed up in costume, nobody will even notice you or judge you (if that is something you are worried about).  It is the first step in becoming a Cosplayer.

Plus Halloween makes it easy for the “newbie” Cosplayer.  Don’t worry about your costume being 100% accurate.  Depending on the character you are wishing to portray… the general public will have no idea who you are.

A Halloween costume makes a good base for a costume too.  My Captain America costume originally started as a Halloween costume.  After each time I’ve worn it, I’ve made small changes to it to make it look better.  Eventually I will overhaul the whole costume, but that will be after I do more costumes and learn new techniques and skills.

It could have gone the easy route, and picked up the pre-made Lone Ranger set by NECA toys.  But I wanted a movie accurate costume, that looked authentic too.  It took over a month to find all the pieces to make the costume.

I searched the internet to find a leather gun belt.  I hit my local thrift stores to find the right jacket and pants.  It took forever to find a white cowboy hat, that would fit this melon I call a head. 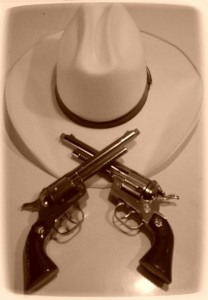 I did cheat and I picked up a NECA Lone Ranger mask and badge set.  But I didn’t like the look of them.  A quick eBay search and I found a NECA movie prop replica of the Lone Ranger badge.  I was much happier with the replica, than the plastic knock-off. 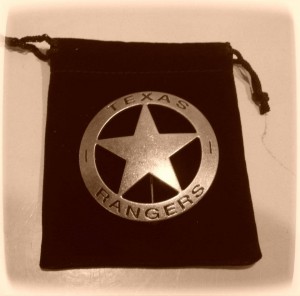 The hardest thing to find was the Lone Ranger guns.  It is almost impossible to find metal toy guns in Canada.  I was able to locate an on-line store in the USA.  After paying for the guns, I found out they don’t ship to Canada.  But luckily I found another online store (www.capgunstore.com) and they will ship to Canada (quickly too).  They have all of your “Wild West” needs. 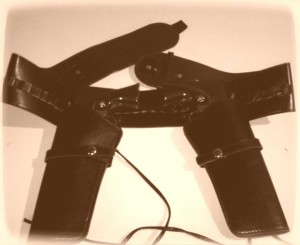 Now that I have a Lone Ranger costume in my closet, I hope to use it at a future convention or show.  Now if I can just figure out how to get a horse into the convention center… 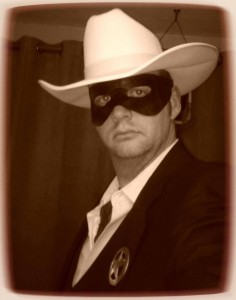 Cosplaying is a fun hobby.  Halloween is fun too.  Why not combine the two and have a blast doing it?  Who knows, someday you may be walking the floor of Fan Expo as a Cosplayer… but you have to start somewhere.