Is continuity important in comics? 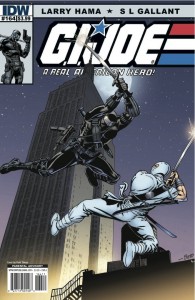 Recently the issue of comic book storyline continuity has been raised. The exact case I want to talk about is IDW’s G.I. Joe A Real American Hero #164. In this issue, a character that was previously dead, Sneak Peek, has returned to the comic. Comic heroes come back from the dead all the time. It sells comics. Almost every hero has died. When those heroes return, there is an explanation and reason for their resurrection. As for Sneak Peek, this wasn’t the case. On one page his name is mentioned in a conversation, on the next page he just pops out of the ground (literally).

In case you are not familiar with G.I. Joe, I will try to explain a bit of the back story here. Sneak Peek was a supporting character on the G.I. Joe team. In issue #113 of the Marvel G.I. Joe A Real American Hero (ARAH) run he was killed off in heroic fashion. It was an emotional comic book written by Larry Hama. During that story arc, many Joes were killed. 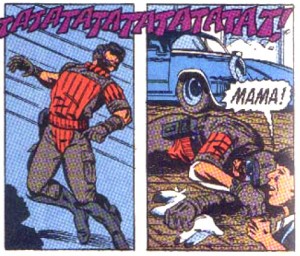 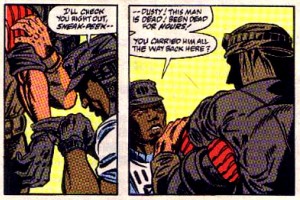 The Marvel G.I. Joe ARAH run finished with issue #155 in December 1994. Devil’s Due Publishing released G.I. Joe from 2001 to 2008. IDW acquired the G.I. Joe licence in 2008. The Devil’s Due run continued the original continuity that Larry Hama established in the Marvel run. Characters that were killed off in the Marvel run, stayed dead. When IDW started to release G.I. Joe the story was a reboot; there wasn’t a connection to the Devil’s Due stories. Later it was announced that Larry Hama would return to G.I. Joe with issue 155-1/2 (for Free Comic Book Day). This would continue the original ARAH run that appeared in Marvel Comics. The Devil’s Due run was now officially known as “Disavowed”, and those stories were then removed from the main continuity. Larry Hama’s new storyline would be considered official continuity to the original story. 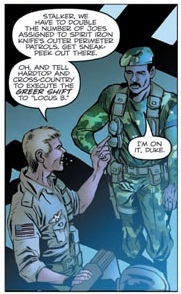 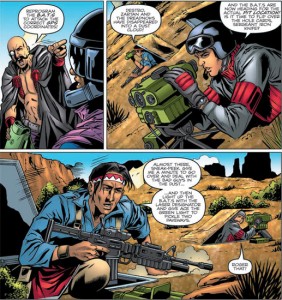 Many fans were shocked when Sneak Peek returned to the pages of G.I. Joe. Especially when he appeared with no explanation of his resurrection. If the new ARAH run is a continuation of the original story, how is this possible?

Larry Hama is on Facebook. A fan asked him on his wall if this Sneak Peek is a new character and not the original. Larry Hama’s response was “I was never big on continuity or plot. The whole RAH storyline was retcon in motion.” IDW never told G.I. Joe fans this was a retcon (editors note: retroactive continuity). We were told it was a continuation of Larry Hama’s original story.

It’s 20 years since the character was killed off, and there is a generation of readers that have never read issue #113, and would not know who Sneak Peek is. Larry Hama has spent 30 years of his career writing G.I. Joe, has he earned the right to change the story?

Is continuity important in comics?

Two questions there and my answer is yes to both of them. Larry Hama has earned the right to change the story of G.I. Joe. He has developed the characters and storylines that have held up for 30 years. But continuity is important. As comic books fans, we invest our time and money on comic books. The story is important to us, or we wouldn’t read it. I can see changes that are forgotten or ignored, especially with the frequent changes of writers on titles. In the case of G.I. Joe, Larry Hama has written the series since day one. I think the fans deserve an explanation on the resurrection of Sneak Peek. There must be a reason why he returned and the fans would like to know. There should be an explanation from IDW on why they are changing the storyline’s continuity, when the fans were told this new series was a continuation from the Marvel story.

Ultimately the fans will decide with their dollars. I will stay with the title for now, to see what is in store. If it is as Larry Hama has said and it is a “retcon in motion”, anything is possible.