Add 10 points to your CBD Scorecard if you know where inspiration for the title came from.

I was at the comic book shop last week and a couple of friends handed me a comic and said “you have to pick this one up”.  The comic they handed me was Catwoman #1.  It wasn’t on my pull list (since Wonder Woman and Batwoman are the only new DC #1’s I’m buying right now) but after flipping through it, I had to buy it. 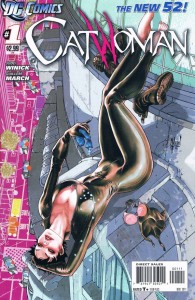 The book reads like a normal Catwoman story.  Catwoman steals stuff.  She makes enemies with the wrong people.  Those people come after Catwoman.  Catwoman’s fence tells her about a place where she can lie low.  She hangs out in a vacant penthouse when Batman shows up.  One thing leads to another and they practice making “Bat-Babies”.  Well I guess the beginning is like a normal Catwoman story, the ending was the real curve ball.

While I really enjoyed the comic, I was also shocked by it too.  First off I’ll tell you, that I am Ok with sex in comics.  I don’t have an issue with it.  There are several books that sex is important to the plot (ie: Watchmen – Silk Spectre and Night Owl).  It is just a fact of life that Super Heroines (and Heroes too) are sexy.  They are drawn that way.  The costume has a lot to do with it, but the nature of the character, the mystery of the secret identity is a factor as well.

What I was shocked by was the final panel in the comic.  Catwoman is on top of Batman.  Most of the costumes are off, and the image is very sexual.  I am shocked because it is a “TEEN” rated comic.  Just by that final page alone, it should have been rated a “MATURE” comic.  That is why I am shocked.  As you can see from the attached picture that there is nothing visible, but it is the climax of the scene and all the intentions are present in that picture.  That is why I feel the comic should have been rated mature. 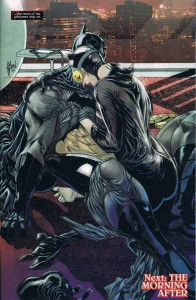 I let my son (who is 8 right now) read teen rated comics.  Teen rated comics have violence, death and blood in them.  Violence and death is easy to explain to kids.  My kids know that comics are not real, and we can’t do what is done in comics.  We can’t fly.  We can’t deflect bullets.  We can’t kill people.  But Catwoman getting half-naked with Batman, that isn’t something I want my 8-year-old to see.  I wouldn’t want him to see it when he’s 13 (I am realistic and know that I can’t prevent it at that age).  There should have been a warning on the comic that there was sexual content in the book.  I commend the staff at the comic book shop for knowing about the sexual content, and I know they’ll refuse to sell that book to a minor.

Catwoman #1 wasn’t the only book to come out last week to feature sex.  Red Hood and the Outlaws also featured a character openly asking another about sex, and the next panel showed them in bed “post-coitus”.

Why has DC gone this direction?  Why is the sexual content increased in a couple of the new books?

One reason I think is to increase sales.  Sex sells.  Always has.  Always will.  There will be customers who grab these books just because of the increased sexuality.  It’s why I bought it (which then turned into this column). 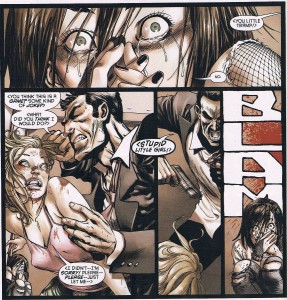 Another reason is realism.  This direction makes the stories realistic.  Sex is a fact of life.  We all have sexual thoughts, feelings and desires.  Superheroes wouldn’t be any different.  A person getting flashed by gamma rays, then getting super human abilities, is unrealistic.  But two people who feel like “getting it on” is realistic.  It is a situation that we can relate to.  It grounds those characters in reality and forges a connection between the character and the reader.  It will lead to interesting stories in the future.  Particularly between Batman and Catwoman, when they wind up on opposite ends of the law from each other.

My complaint about this is there should be an appropriate rating on the cover of the book.  I would’ve felt more comfortable if the book was rated for mature readers.  Instead I am worried the book will wind up in the hands of a children, and they shouldn’t be exposed to sexuality this soon.  I hope parents out there will check out the comics before they let their children read them; I know I do.