I have a lot of comics.  I don’t have more than some of you reading this right now, but I do have a lot more than an average reader.

Many of the comics I have bought have disappeared.  Some were misplaced.  Some were given to my kids and were summarily destroyed.  I have sold a couple of them, and a bunch of them were donated to various thrift stores.

Oddly enough some of my favourite comics are gone.  They have disappeared, never to be found again (I think my Mom threw them out).

This will happen when you collect comic books when you are a kid.  “Bagging and boarding” was unheard of to this kid who grew up in the 80’s.  I used to carry my comics around in an old grocery bag.  They were beat up and in rough shape.  My name was written in all of the “Olympic” ads in the books.  But I loved them. 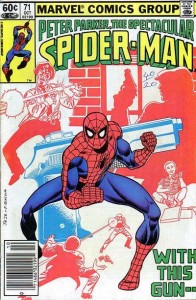 One of my favourite books was Spectacular Spider-Man #71.  That was one of my first comic books about a Super-hero in my collection.  I did have some Disney Gold Key books at that time, which were thrown away at sometime (and they are probably worth more money than Spectacular #71 now).  The story was about a shipment of guns coming into New York and Spider-Man tracking down the gang bringing them in, and trying to put a stop to them.

The subject matter was pretty heavy for Spider-Man.  Now when I read it, it feels more like a late 80’s Batman Detective Comics story.  Not a Spidey book.  Even Spidey himself is serious in the book.  He doesn’t joke around like he normally does.

When I was a kid, I just enjoyed the artwork.  I may have read the dialogue balloons if there weren’t too many words there.  As I grew older I read that comic over and over again.  But then it disappeared from my collection.

It wasn’t until just before I started writing for Comic Book Daily that I was able to track down a copy online.  It wasn’t very expensive to replace and I had it in my collection again.  All these years later the artwork still grabs me.  I think the cover for that comic is iconic.  It is one of my all time favourites and I would love to find another copy of it, just to have it framed on my wall. 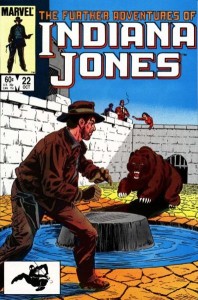 Another one of my all-time favourite comics is The Further Adventures of Indiana Jones #22.

If you grew up in the 80’s you had to love Indiana Jones.  If you never saw Indiana Jones, you must have grown up, locked in the mines of the Temple of Doom.

Issue #22 was another comic I just had to have when I saw it on the comic rack.  Come on!  It’s Indiana Jones.

The only thing that was confusing to me back when I was a kid, was where did this fit into the continuity of the Indiana Jones universe.  This issue came out a long time before The Last Crusade, but only several months after the theatrical release of Temple of Doom in 1984.  I had to wait until the summer of 1985 before I saw Doom on Beta-Vision (Wikipedia Beta kids so you can follow along).

This was another comic that I have found online to replace my missing issue.  The cover is great.  Indiana Jones versus a Bear.  Can you get any more awesome than that?

Looking into it now I have learned that this issue is the 3rd part or a story line that takes place in 1936 (which is post Temple of Doom, but around the time of Raiders).  That is probably why the story never made sense to me.  I am only reading one part of the series.  Someday, I hope to find the complete run of The Further Adventures of Indiana Jones and I will know what is going on (which is also available in Omnibus format). 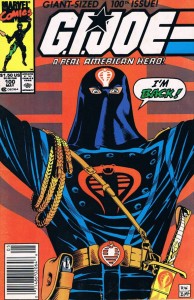 G.I. Joe #100 changed how I think about Cobra as an evil organization.  Growing up with G.I. Joe, I was used to seeing Cobra plot an evil scheme, but to have their plans foiled within 22 minutes of cartoon airtime.  #100 changed that because it showed me Cobra can be more conniving and dangerous.

In this issue, Cobra Commander returns from the dead (actually he returns in issue #99, but after clearing house in that book this is his first issue to get down to business).  His first idea is to take over a town in middle America and brainwash the populace to become slaves for Cobra.

Two G.I. Joe operative, Mutt and Spirit, just happen to be in town visiting Mutt’s Uncle Jeff.  While Cobra is taking over the town, and shutting down communications to the “outside world”, Mutt and Spirit are being pursued by Cobra.

This issue showed me that Cobra can have huge plans, and it changed how I played with my toys.  Instead of playing with my Joes for an hour in my room, I had long and complicated storylines for my characters and I had to keep my G.I. Joe set up for weeks at a time.  It changed my action figures into a live action comic for me.

I know the G.I. Joe comic featured huge story arcs before, but issue #100 was the first Joe comic I ever bought.  I had read several issues before that my friends had, but I still remember the day I found issue #100 sitting on the shelf at the local corner store from my school.  I was excited when I got my hands on that issue.  Even now after reading every single issue, either by the copies I have or picking up the classic collected editions, that story arc is still my favourite.

How about you?  What are some of your favourite comics?  Have your say in the comment section below.