Last week Brent Chittenden published his holiday gift ideas for your favourite nerd boy or girl.  One thing I love about Christmas is, giving someone a “nerd-gift” that they’d never expect and totally geek out about (I was going to reverse that statement, but it is better to give than receive).

When you receive a gift, you can tell your Spouse/Parent/Friend/Roommate/Sibling/Co-Worker really cares about you when they buy you a “nerd-gift” especially when they have no idea what it is. (“Well son did you like that Megathong I bought you?”… “Dad… it’s Mega-TRON!… Megatron”).  Sometimes I feel sorry for my loved ones, scouring the action figure aisles or comic book shelves trying to find a gift to make my Christmas special.  Just knowing they put that much thought into the gift makes it even more special.

December is a very expensive month for our household.  In my immediate family, we have 5 birthdays from the beginning of December until the 2nd of January.  My birthday is one of them.  There are a lot of gifts being exchanged in my family during the next 4 weeks.

Since I have always been a comic and action figure fan, I usually receive some sort of comic inspired gift for my birthday and Christmas.

I thought I would take this opportunity to tell you about some of my favourite gifts (in no particular order). 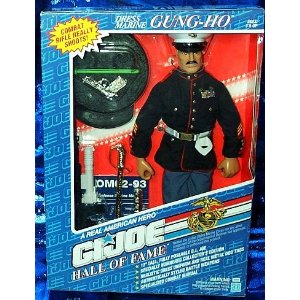 (photo courtesy Amazon.com… cause there’s no chance mine would ever stay in the package)

In the early 90’s, Hasbro released 12″ versions of popular 3-3/4″ action figures.  The 12″ Joes had not been on the shelves since the early 70’s.  The re-released Joes were very popular when they came out, so more waves were released.  By 1993 nine more figures were released.  My sister bought me the 12″ Stalker figure for Christmas in 1992, but my favourite was Gung Ho in 1993.  If you are familiar with G.I. Joe you know Gung Ho has a very iconic look.  He wears a vest, and goes bare chested showing off his Marine logo tattoo.  The 1993 Gung Ho came out with his dress Marine blues (the 1987 version of Gung Ho).  That’s why I like this figure so much.  Usually toys come out combat ready.  This was the first one to come out as more of a display piece.  It is still a major part of my collection, but unfortunately limited space permits it from having a space on my shelf.  But Gung Ho (along with my other 12″ Joes) live in a box beside my coffee table in my basement (or Fortress of Nerditude… whichever you’d prefer to call it). 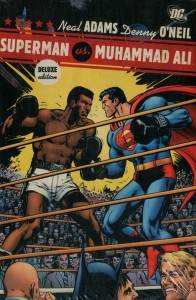 Last Christmas my wife bought me the re-released copy of the DC classic comic, Superman vs. Muhammad Ali.  When it was re-released last year, I told her this was a comic I had to own.  I think it should be a must own for everyone.  It just shows how much of a pop culture icon Muhammad Ali was in the 70’s and early 80’s.  What I like most about receiving this for Christmas was my wife went into Blue Beetle Comics and purchased it for me.  She’s been into the comic shop with me many times, but it is my hang-out so she’d rarely go in by herself.  This time she went in to buy the comic, but after Christmas she told me she was there for over an hour talking to our friends and having lots of fun.  That is why I treasure this comic so much.  She went to the extra effort to find me the perfect gift, and became a comic book shop customer.  She’s gone in many times since to buy books for herself. 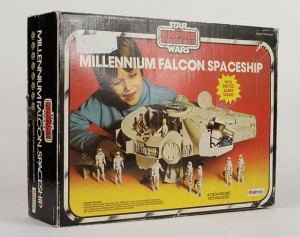 The retro packaging for toys was always the coolest

If you grew up in the 80’s there is no doubt you collected Star Wars.  At one time I used to have more Star Wars toys than G.I. Joe toys (G.I. Joe quickly eclipsed Star Wars).  One of my big Christmas presents when I was a kid was the Millenium Falcon.  This is still my favourite Sci-Fi vehicle of all time (suck it Enterprise).  I was ecstatic when I received my own Millenium Falcon.  Unfortunately I never did get a Han Solo or Chewbacca figure to pilot it.  This was one of the biggest toys I owned when I was a kid.  It had an unfortunate fate though.  If you remember the original Falcon, there was a cardboard piece seperating the cockpit from the rest of the ship.  Some kid told me on the school playground that if you took out the cardboard there was a hidden compartment in there.  So instead of removing the screws from the bottom of the Falcon and seperating the upper and lower half of the ship, I took scissors and cut the cardboard piece out.  I completely destroyed my Falcon because of schoolyard rumours.  I still played with it for many years after that.  Eventually my interest in Star Wars toys waned and I tossed out the broken shell of my Falcon.

It is still a toy I’d like to get my hands on today.  Several years ago the Falcon was re-released but the $180 price tag was too much to replace a piece of my childhood.  So instead of finding another Falcon, I have my collectors plate to cherish.  That’s right… Star Wars collector plates. 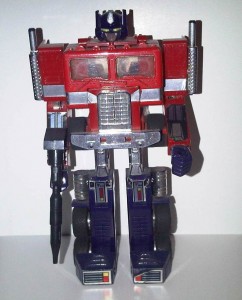 My Optimus Prime that has been in my collection since the 80’s. He even avoided certain death at the hands of a screwdriver.

They are more than meets the eye and they were all the rage in the 80’s.  Another big Christmas present for me when I was a kid was my Optimus Prime Transformer.  Optimus Prime is my favourite Transformer and this figure has been in my collection ever since I got it.  The trailer disappeared many years ago, but Prime is still in great condition.  For a kid today it is easy to get an Optimus Prime, he’s everywhere.  Another version comes out every year.  But back in the 80’s several years went by before Prime was re-released.  So if you were a kid then, and you missed out on Optimus when he came out, you might never had received one.  The original design of Optimus Prime is still my favourite. 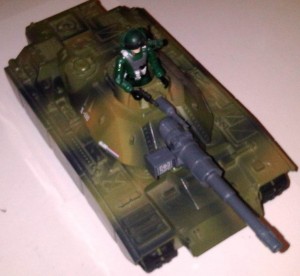 If you collected G.I. Joe in the 90’s you know that the line disappeared in early 1995.  Hasbro released remakes from original molds in 1998.  One of the 1998 releases was the remake of the 1982 MOBAT tank.  At that time it came out as a Toys R Us exclusive.  In 2000 it was released again with updated packaging.  Ok, so there’s a bit of history about the toy.  I know I said this list was in no particular order, but there is a reason this is the last item on my list.  This was the very first toy my Wife (at that time girlfriend) bought me.  So you are probably thinking that was a sweet gesture on her part, but no it was far from it.  This was a MONUMENTAL gesture on her part.

I received the MOBAT on our second Christmas as a couple.  When we spent our first Christmas together she bought me useful items like clothes, cologne and that kind of junk.  My Christmas list to her that year was filled with action figures and video games.  She wanted to get me practical items.  As you know I love toys, so it was a disappointing Christmas for yours truly that first year.

For our second Christmas I expected a repeat of the previous year.  I opened a couple shirts and stuff like that, then she pulled out a heavier box and gave it to me.  I had no idea what it was, maybe a roadside emergency kit or something like that.  I unwrapped my present and totally geeked out.  She bought me a G.I. Joe toy.  I couldn’t believe it.  It was awesome because in my mind, she accepted me for the geek that I am (she followed that gift with Spider-Man on PSone, still one of the best Spidey video games of all time.)

So now you’ve read about some of my most treasured Christmas gifts.  What are some of your favourite Christmas “geek” gifts?

Share some of your memories in the comments below.